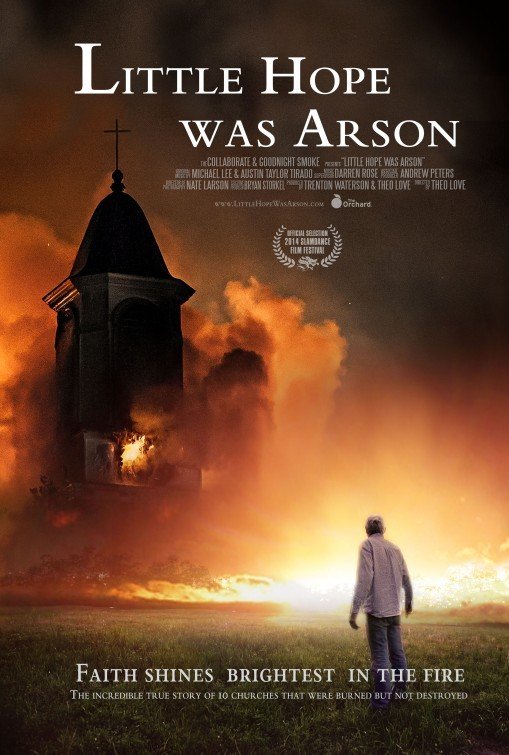 LITTLE HOPE WAS ARSON is a riveting documentary about solving the 2010 arson of 10 churches within 40 miles of each other in East Texas. The number of churches involved made the national news. The authorities try to find evidence concerning two young, troubled suspects. Meanwhile, the church pastors and their congregants try to figure out how to deal with the enormity of the crimes and the importance of the Gospel, which includes forgiveness.

LITTLE HOPE WAS ARSON asks significant questions, all of which lead to an appreciation of the Gospel of Jesus Christ. It’s one of those rare documentaries that has potential at the box office because it’s structured like a dramatic story. The first half is full of jeopardy. The second half has a wonderful dynamic quality. LITTLE HOPE WAS ARSON discusses arson, potential suicide, drugs, and other tremendous problems, but never goes over the edge, never becomes salacious, and never makes any of this attractive to the audience. LITTLE HOPE WAS ARSON reveals both the sinfulness of man and our desperate need for Jesus Christ. It’s well worth watching.

(CCC, BBB, L, VV, S, DD, M) Very strong Christian worldview about the burning 10 churches in East Texas with many discussions of salvation, faith, discipleship, forgiveness, repentance; two light obscenities; strong discussions of violent destruction of churches, with discussions of attempted suicide, discussions of “pulling the plug”; discussions of sexual activity; no nudity; no alcohol; discussions of drug use; and, woman protects family so she won’t be a snitch but does so at the detriment of other people.

LITTLE HOPE WAS ARSON begins as a detective documentary about trying to solve the burning of 10 churches within 40 miles of each other in East Texas. The number of churches involved made this a national news item. It was the third time in history that two National Response teams, squadrons of Alcohol, Tobacco and Firearms (ATF) agents, were dispatched to respond to a crime, outside of the 9-11 Pentagon attack and the Oklahoma federal building bombing. This response turned the investigation into East Texas’ biggest manhunt to date.

The movie opens by pointing out that three adjacent counties in East Texas have 275,000 people and more than 1,400 churches. The ATF’s detective, the news media and the congregants talk about the burning of a small country church named “Little Hope Baptist Church.” The fire was declared electrical in nature. However, soon afterwards, nine other churches were burned, causing much concern and alarm throughout these three counties.

The detectives have one thing on their mind: finding out and stopping “whodunit.” The congregations are devastated because their families have been going to these churches for decades. They note that while they understand the church is the people and not the building, there are just so many wonderful memories tied to the building, and they feel the loss as the firefighters put out the fires. The pastors of the churches who fell victim to the fires are trying to figure out how to deal with the enormity of the crime and the importance of the Gospel, which includes forgiveness.

Some congregations take up arms to protect their own churches at night, curious as to who might be attacking the church community. The ATF detectives do their best to gather very limited evidence and establish a tip line with reward money.

Eventually, a phone call to the tip lines leads to two lead suspects, a young man named Jason and another named Daniel. The lead detectives call the names in to the dispatcher, Christy, and Christy’s world is upturned when she finds out one of those names is her very own brother, who is now a lead suspect for the same fires she’s been investigating.

Since the two lead suspects come from within the church community, this documentary takes a turn from detective crime thriller to a faith and family drama as more is revealed about two boys who would grow up in church, but then lose their faith and start burning churches down.

How does Christy cope with working alongside the law against her very own brother? Can the Texas Rangers and the ATF get enough evidence to convict Jason and Daniel? Will either of them ever repent and find peace in Jesus Christ? How can the church, that is, the body of believers, deal with their own loss and witness to the Good News?

LITTLE HOPE WAS ARSON asks some significant questions about faith, family and forgiveness, all of which lead to an appreciation of the Gospel and the Body of Christ. It’s one of those few documentaries that has potential at the box office because it’s structured like a dramatic story.

Act One is full of jeopardy and very exciting. The documentary leads the audience through the burning of each church so that the audience cries out for the detectives and police to solve the crime. Act Two examines the background and psychology of the two suspects and is a little softer. Act Three has a wonderful dynamic quality to it. The audience hopes for justice and resolution while at the same time wanting the Good News, the Gospel, to triumph.

LITTLE HOPE WAS ARSON discusses arson, potential suicide, drugs, and other tremendous problems, but never goes over the edge, never becomes salacious, and never makes any of this attractive to the viewer. There are two light obscenities, but it’s amazing that there are no more considering that the movie includes documentary interviews.