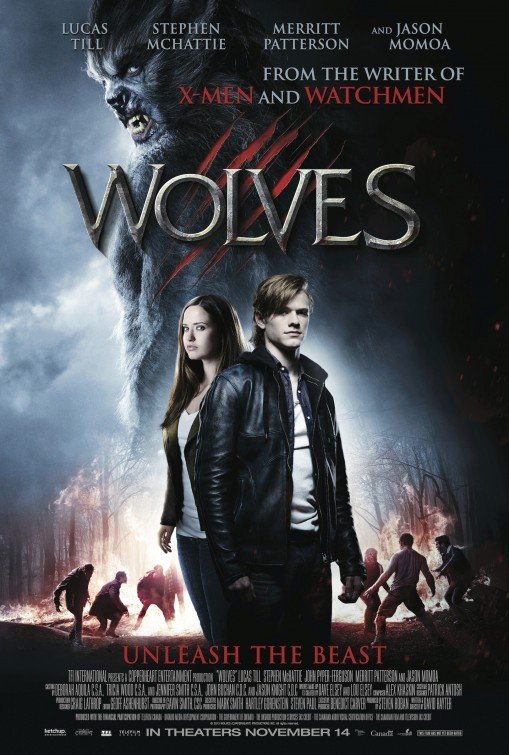 WOLVES follows a teenage boy named Cayden, a high school quarterback in a small town “where football is the true religion.” Cayden is starting to have violent impulses. One night he comes home to find that the people he thought were his parents have been killed viciously. He runs and finds a strange old man who claims to be a werewolf. The man directs him to a town that turns out to be filled with factions of good and evil werewolves. There, Cayden is taken in by a kindly farmer, who is really Cayden’s uncle from his true werewolf family. Eventually, Cayden must have a showdown with the leader of the evil werewolves.

WOLVES is a well-made werewolf movie, with a driving plot and some striking photography. The teenage hero wants to use his powers for good, to stop the evil werewolf gang and to help others. He’s also willing forgive one of the villains. However, the movie has a casual attitude toward teen sex along with scenes of extreme violence and drunkenness. Ultimately, the lurid moments in WOLVES are too much.

(PaPaPa, OO, RoRo, B, C, LLL, VVV, SS, NN, AA, MMM) Very strong pagan worldview mixed with some pagan immorality, occultism, and Romanticism, but hero says he wants to use his occult powers for good and sacrifice himself for others, but movie has a casual attitude toward teenage sex; 23 obscenities (including at least one “f” word) and five or seven profanities; some very strong and strong violence includes several werewolf fights with some close-up shots of throats getting slashed and blood spurting, limbs torn apart, protagonist punches opposing football player severely and gets arrested, protagonist is accused of killing his parents in a bloody murder spree and he goes on the run (where he finds his true origins), werewolf protagonist saves truck stop prostitute from being beaten and slashes throats of her attackers, and special bullets cause evil werewolves to explode; strong sexual content includes a scene of depicted teenage fornication and another bedroom scene where attempted fornication is interrupted; upper and rear female nudity in one sex scene; frequent alcohol drinking and drunkenness in the background, especially by bad werewolves; no smoking or drugs; and, evil plots of crimes, lies and deceptions abound among the werewolf factions as they double-cross each other, and one evil werewolf tries to shift the blame for his killings to the hero and another evil werewolf, but teenage protagonist tries to control his growing werewolf impulses and is willing to forgive one villain and not have him killed when he easily could have killed him.

WOLVES is an action horror movie about a high school quarterback who learns that he’s not only adopted but actually a werewolf, and then has to save a town of good werewolves from an attack by evil ones. WOLVES is surprisingly well made for a B movie, but its immoral pagan elements sometimes overcome the positive moral elements in the story.

The story follows a teenage boy named Cayden (Lucas Till), a high school quarterback in a small town “where football is the true religion.” As a teenager, he’s been having strange violent impulses, so one night he comes home to find that the people he thought were his parents have been killed viciously. He goes on the run and finds a strange old man who claims to be a werewolf directing him to go to a town that turns out to be filled with factions of good and evil werewolves.

There, Cayden is taken in by a kindly farmer whom he comes to learn is his uncle from his true werewolf family. When the evil werewolves start to get angry that Cayden is ruining all their evil plans, they decide to kill him. At the same time, the man who appears to be the evil wolves’ leader, Connor (Jason Momoa), is determined to take the one non-werewolf girl in town and impregnate her at a ceremony under the full moon on Halloween the next night.

Cayden and Connor must have one final showdown to resolve all the good versus evil wolf fighting and their own personal issues, which come with twists of their own.

WOLVES is a surprisingly well-made werewolf movie, considering it has no big stars in it and likely had a low budget. However, writer-director David Hayter has plenty of experience with the X-MEN and WOLVERINE movies, and he does a good job of keeping things moving on an entertainment level. The cinematography under moonlit skies in the woods and cornfields of small-town America are often spectacular, as are the movie’s convincing wolf effects.

Most of the largely unknown cast does a good job in their rather clichéd small-town-character roles, but star Lucas Till is somewhat of a weak spot since his performance is wooden, and his lines come across stilted in his delivery. Despite this, he’s an athletic presence in a movie that might prove to be a good springboard for a career as an action star.

The biggest problem with WOLVES is the movie’s casual attitude about sex. The hero is seen casually in bed with a girlfriend twice. This is treated like no big deal by those around him. Also, a key plot point about an evil werewolf wanting to impregnate a female human virgin is tacky to say the least. As for violence, the movie has lots of wolf on wolf violence that’s mostly a lot of fighting, but several people and werewolves do get their throats slashed with claws.

On the positive side, the hero tries to use his powers for good, to stop the evil werewolf gang and to help others. He’s also willing forgive one of the villains.

Overall, WOLVES is the definition of a guilty pleasure, a low-budget movie that’s better-made than it had to be. That said, media-wise viewers will find WOLVES too lurid to watch, especially when the pagan elements overwhelm the movie’s moral content.