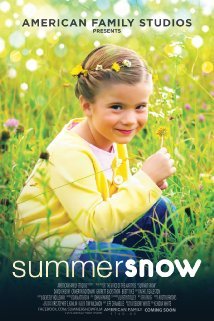 SUMMER SNOW tells about a family that just lost their mother. The father, Dan, is a dentist who doesn’t know how to cook. The older daughter, Julie, is planning to get married to Colton. The teenage son, David, is looking for love in all the wrong places. The driving protagonist is the little daughter, Hallie. Hallie wants to help her schoolmate get money for fixing her tooth, but she goes about it in the wrong way. Hallie is shocked when her father says he has to charge to fix people’s teeth. Throughout the story, it is revealed before she died the mother had written letters to each person in the family to encourage them and bring them closer to God.

SUMMER SNOW, despite good cinematography and good acting, is very boring, except for a few poignant moments. It’s a movie without a premise, so viewers might find themselves asking, “What’s happening?’ Even so, the movie has some jeopardy and the acting is good, so SUMMER SNOW would work as a TV movie. Even so, conversion, healing, adoption, and evangelism happen in SUMMER SNOW.

(CCC, BB, V, S, M) Very strong Christian worldview with strong moral elements and evangelistic message; no foul language; brief light violence when girl is hit by car backing up, plus mother dies just before the beginning; no sex scenes but implied sexual references when teenage boy looks at pornography and almost gets into a sexual relationship but nothing is shown, plus girl gets pregnant out of wedlock; no nudity; no alcohol; no smoking or drugs; and, daughter says her father the dentist shouldn’t charge for fixing teeth so some light anti-capitalist elements, daughter steals toothbrushes from father’s office, girl has a garage sale with things her father doesn’t want to sell, family seems to recover too quickly from mother’s death, young couple adopts baby but then leaves him with father to do mission work.

With good cinematography and good acting, SUMMER SNOW tells the story of a family who needs God’s help to recover from the loss of their wife and mother. Throughout the story, it is revealed before she died the mother had written letters to each person in the family to encourage them and bring them closer to God.

The father, Dan, is a dentist who doesn’t know how to cook or clean. The older daughter, Julie, is planning to get married to Colton. The son, David, is in his teenage years and looking for love in all the wrong places. The driving protagonist is the little daughter, Hallie. Hallie wants to help her schoolmate, who hardly speaks English, to get some work done on her teeth.

Hallie is shocked when her father says he has to charge to fix people’s teeth. She finds how much it costs to extract a tooth, and she tries to raise the money: by selling toothbrushes stolen from her father’s office, by planting weeds in her family’s garden, and by selling items in the garage, including VHS tapes that are the only remaining memories of the mother. In the process of raising these funds to help her classmate, Hallie helps the neighbor recover from his own life trauma and helps her brother recover from his sexual fantasies when he accidentally backs into her and almost kills her.

Even so, conversion, healing, adoption, and all sorts of good things happen in SUMMER SNOW, and the ending is emotive and evangelistic.