MAGICIAN: THE ASTONISHING LIFE AND WORK OF ORSON WELLES 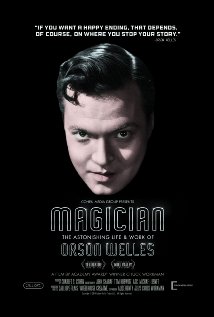 MAGICIAN: THE ASTONISHING LIFE AND WORK OF ORSON WELLES is a midling documentary about the director of such classic movies as CITIZEN KANE, MAGNIFICENT AMBERSONS and TOUCH OF EVIL. Welles also became an iconic movie star and celebrity, appearing in classic movies such as THE THIRD MAN and A MAN FOR ALL SEASONS. This documentary discusses Orson’s early life as a child musical prodigy, then as a Shakespearean director in high school, to a radio and theater star at age 20, then onto his movie career. It mentions his romances with some of the most beautiful women of Hollywood, including Rita Hayworth, and contains clips of most of his movies.

MAGICIAN has some insights into Orson’s life and career. It’s a nice introduction to Welles, but it could have been much better. The documentary leaps from period to period, movie to movie and interview to interview without much drama or purpose. It also misses some obvious things about Welles and his greatest movies. Finally, MAGICIAN has some brief, mostly light foul language and light mature themes, so caution for older children is advised.

(RoRoRo, B, P, L, V, S, A, D, M) Very strong Romantic worldview of artistic expression as being totally personal and iconoclastic, no matter what the average viewer or person might think or enjoy, with some moral, patriotic elements; five or six obscenities (including one or two “f” words) and three light profanities; light violent movie scenes; some sexuality, including brief but tasteful discussion of multiple affairs, marriages; no nudity; alcohol use; smoking; and, pride, some references to stage magic and mention is made that the male protagonist once played the Virgin Mary on stage in a Christmas play of some sort.

MAGICIAN: THE ASTONISHING LIFE AND WORK OF ORSON WELLES is a halfway interesting documentary about the director of such classic movies as CITIZEN KANE, THE MAGNIFICENT AMBERSONS and TOUCH OF EVIL and iconic star of such classics as THE THIRD MAN and the 1942 version of JANE EYRE. It has some new perspectives of the man and his work, including a couple forgotten revelations from Orson himself, but it misses some points that a documentary on Orson Welles should contain.

The movie discusses Orson’s early life as a child musical prodigy, then as a Shakespearean director in high school, to a radio and theater star at age 20, then onto his varied movie career. It mentions his romances with some of the most beautiful women of Hollywood, including Rita Hayworth, and contains clips of most of his movies. There are even clips of some of his unreleased and unfinished movies, including THE OTHER SIDE OF THE DREAM and THE DEEP. The movie’s main argument is that Welles was never a “Hollywood” director but was really an independent filmmaker of great creativity. As such, the filmmakers assert, he remains a role model for all other independent filmmakers working in the cinema, especially today when just about anyone can make a professional movie because of all the technological advances that filmmaking has achieved.

This last point may have some truth to it. After all, the best of Orson’s later movies, such as CHIMES AT MIDNIGHT and THE TRIAL, certainly contain some brilliant cinematic flourishes and achievements, despite their low budgets. For example, the big battle scene in CHIMES (a compilation of Shakespearean plays focusing on the character of Sir John Falstaff, who appears in HENRY IV, PART 1 and II, and in THE MERRY WIVES OF WINDSOR, with material from HENRY V) is one of the finest ever made, and THE TRIAL contains some haunting scenes filled with striking images. That said, the sound in these works, from LADY OF SHANGHAI to the rest, renders some of the dialogue too hard to hear at times. Also, except for TOUCH OF EVIL, the story structure in these later movies leaves a bit to be desired, to the point of being sleep inducing. The documentary, however, skims over such criticisms to apparently assert that filmmakers bear little or no responsibility to the audience but only to their “personal” vision, no matter how bored, uninterested, frustrated, or alienated the average moviegoer might become.

There are, however, some useful insights. For example, Welles admits in one interview that he’s a little ashamed about the answer to the meaning of “rosebud” in CITIZEN KANE, the last word that the title character, Charles Foster Kane, says before he dies. Welles says the answer amounts to a cheap psychological trick. The documentary fails to go deeper here, however. It fails to note that, in the scene right before the revelation of the meaning of “rosebud,” the reporter seeking the answer to rosebud says that the meaning of the word doesn’t really matter. Why? Because you can’t sum up a person’s life in just one word, the reporter says. Thus, he adds, the answer to the meaning of Kane’s final word is just “one piece in a jigsaw puzzle.” These lines are key to a true understanding of the movie CITIZEN KANE. They open up the movie and its myriad images, scenes and themes in a tremendous way that shows just why KANE is still considered by many film scholars and serious critics to be the greatest movie ever made, or at least among the Top 5.

Overall, therefore, MAGICIAN is a nice introduction to Orson Welles, his life and career, but it could have been much, much better. The documentary leaps from period to period, movie to movie and interview to interview without much drama or purpose. It also misses one of the most obvious things about all of Orson’s movies: that they all seem to focus, in a very Shakespearean way, on one man who has a major flaw that either becomes the man’s undoing, or nearly becomes his undoing. This is not only true of the major character in each of Orson’s movies; it also seems true of the man himself. Thus, Orson’s appetite for stubborn self-destruction, or his stubborn appetite for self-indulgence, prevented him from reaching the kind of wide audience or consistent work that other great Hollywood directors, such as John Ford, Howard Hawks, William Wyler, Alfred Hitchcock, Frank Capra, Billy Wilder, and George Cukor, achieved. To be sure, his flaw (however you describe it) set Orson apart from them, but it also prevented him from getting the same kind of money and artistic support they received throughout their careers. Like his own movies, therefore, the life and work of Orson Welles was a Shakespearean tragedy of epic proportions. You certainly can’t say Orson wasted his life, but he did, to some sad extent, waste his prodigious talent. All that said, the best of Orson’s movies, including CITIZEN KANE, THE MAGNIFICENT AMBERSONS, TOUCH OF EVIL, THE TRIAL, and CHIMES AT MIDNIGHT, will remain etched in the minds and memories of any fair-minded cinema buff who has the opportunity to see them. Who can forget Orson’s striking performances in three of those movies, or in such classic works like THE THIRD MAN, JANE EYRE, COMPULSION, A MAN FOR ALL SEASONS, and THE LONG, HOT SUMMER?

There is some brief, mostly light foul language and movie violence in MAGICIAN, so caution for older children is advised.

Watch MAGICIAN: THE ASTONISHING LIFE AND WORK OF ORSON WELLES: