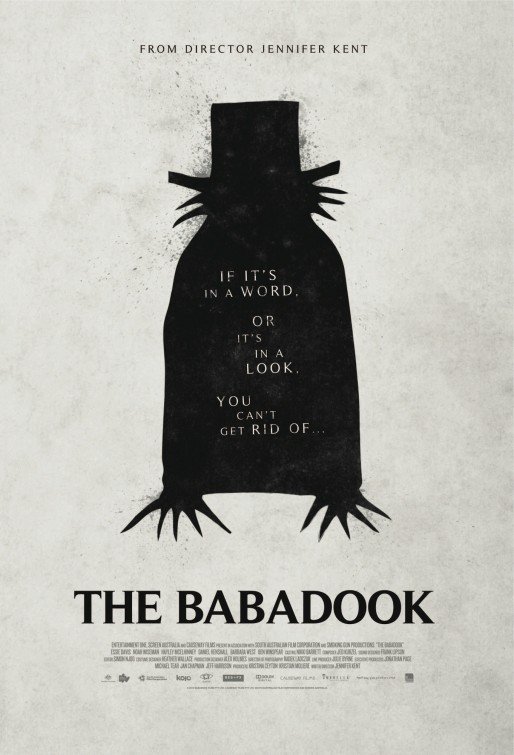 THE BABADOOK is a smartly written and directed low budget horror movie. Amelia is a single mother whose husband died in a car crash. Her rambunctious son, Sam, who’s obsessed with imaginary friends, is always getting into trouble, causing fights and creating homemade weapons. Having trouble sleeping, Sam asks Amelia to read him a bedtime story called “Mister Babadook.” The story is about a supernatural monster that stalks anyone aware of its existence. After reading the book, strange things begin occurring, and Amelia is pushed to her mental limit to the point where she becomes a danger to her son.

THE BABADOOK is more suspenseful than scary. At one point or another, it successfully makes the audience both fear and feel for Amelia and Sam. Though both Amelia and Sam are troubled, they ultimately stick up for each other. Sam especially shows resolve for protecting his mother from the Babadook and herself. That said, the supernatural occult elements in THE BABADOOK are not fought with the Gospel or Jesus. This along with some disturbing images makes THE BABADOOK an excessive, unacceptable movie.

(OO, HH, B, L, VVV, S, DD, M) Strong occult, humanist worldview mitigated by some light moral values about fighting for your family; six obscenities (two “f” words), one profanity, boy pees himself; many scary images of a frightening supernatural creature, a woman finds glass in her food, little boy pushes little girl out of treehouse (the audience doesn’t see her hit the ground), woman breaks a dogs neck, woman rips her own tooth out and tries to kill her son, woman has quick nightmare that her son is dead, a boy stabs his mentally deranged mother, a man’s head is sliced off in a vision, and possessed woman vomits sludge; sexual content when woman uses a vibrator under her sheets until she’s interrupted by her son, plus a kiss between married couple; no nudity; no alcohol; prescription sleeping drugs taken; a woman hits another car and flees.

THE BABADOOK is a smartly written and directed low budget horror movie from Australia, but it has some disturbing things about it.

Amelia is a single mother whose husband died in a car crash. Her rambunctious son, Sam, is always getting into trouble at school and home, causing fights and creating homemade weapons. He’s also obsessed with his imaginary friends. Having trouble sleeping at night, Sam asks his mother one evening to read a bedtime book that he found called “Mister Babadook.” As Amelia reads the book about a supernatural monster that haunts anyone made aware of its existence, she realizes it was a mistake, and Sam becomes extremely scared.

Sam becomes obsessed with the Babadook, convinced it’s going to kill them both. Amelia gets rid of the book and just wants Sam to calm down, but the book keeps reappearing.

Starting to become paranoid and utterly pushed to her mental limits with Sam’s antics, Amelia gets sleeping medicine from the doctor to help both her and Sam sleep at night. At times, Sam becomes violent with her, but when he’s calm, he promises to protect her against the Babadook.

Strange things occur around the house, and Amelia’s mental state begins to deteriorate. When the Babadook reveals itself and overcomes Amelia, it tells her that she must give up her son. Lost over to its control, Amelia stalks her son around the house and tries to catch him. Sam is frightened by his deranged mom, but he promised to protect her, so he refuses to let her give up.

THE BABADOOK is more suspenseful than scary. At one point or another, it successfully makes the audience both fear and feel for Amelia and Sam. THE BABADOOK also focuses on character and the relationship between the mother and her son. This is where the positive moral elements come into play. Though both Amelia and Sam are troubled at points, they ultimately stick up for each other. Sam especially shows resolve for protecting his mother from the Babadook and herself. The lesson by the end is that family is what’s important, and, sometimes, you have to let the past be the past.

That said, the supernatural occult elements in THE BABADOOK are not fought with the Gospel or Jesus. Love is a very biblical moral attribute, but human love alone can’t defeat demonic powers, it’s only through Jesus Christ that one can be free of spiritual oppression. This, along with some disturbing images, makes THE BABADOOK an excessive, unacceptable movie. Please see our CONTENT section.