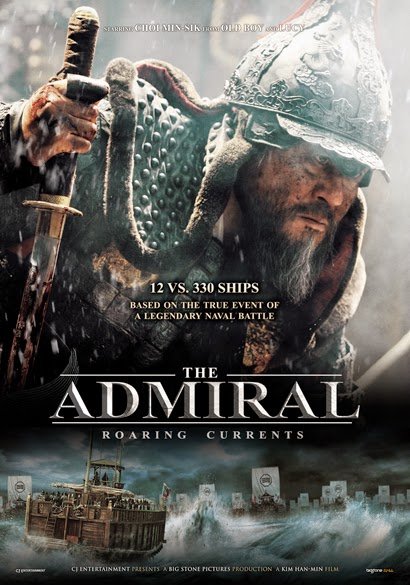 THE ADMIRAL: ROARING CURRENTS is a thrilling movie from South Korea about the courageous story of Admiral Yi Sun-Shin and a historic naval battle in 1597. The Japanese Navy outnumbers Yi’s ships by 27 to 1. All the odds seem stacked against him and his men. First, Yi’s king tries to have him killed because he refuses to leave his post. Also, his troops are plagued with fear. Yi explains to his son that they have to turn the fear of the men into courage. To do this, Admiral Yi knows he must sacrifice himself. During the battle, Yi has to face an old nemesis who is a pirate king holding a vendetta against the admiral.

THE ADMIRAL shows the power of unity and sacrifice overcoming doubt, fear and hysteria. The title character tells his son about the importance of integrity and strong leadership. THE ADMIRAL has a strong mixed pagan worldview. There are references to ancestor worship and Buddhism mixed with strong moral elements and some redemptive sacrifice. Excessive is warranted for this mixture and plenty of extreme, graphic war violence.

(PaPa, FRFR, BB, P, C, L, VVV, D, MM) Strong mixed pagan worldview as protagonist speaks/prays to his ancestors and leaders of the past, and there are Buddhist monks, with strong moral elements as protagonist teaches his son about leadership and integrity and defends his country, with some light redemptive elements as an admiral and his men risk their lives to protect their country and its people and hold the line against an invading army; six obscenities; very strong extreme graphic violence with blood as soldiers are blown up by cannons, and other explosives, shot, stabbed, decapitated, including people cough up blood; no sexual content; no nudity; no alcohol; pipe smoking; and, greed, revenge, betrayal, arson, bad role models.

THE ADMIRAL: ROARING CURRENTS is a thrilling movie from South Korea that tells the courageous story of Admiral Yi Sun-Shin of Korea and the historic naval battle of Myeongnyang in 1597.

Admiral Yi faces a dilemma because he has only 12 ships left to face the approaching enemy fleet of 330 ships. This includes Kurishima, a Japanese pirate king with a deep personal vendetta against Admiral Yi Sun-Shin. Yi has already been commanded to pull back what remains of his forces by his superior officer, but he believes he must make a stand to hold the line against the invading Japanese.

Throughout THE ADMIRAL: ROARING CURRENTS, Yi deals with the odds that are stacked against him and his men. His last great battle ship, known as the turtle ship, is destroyed by fire. Even his king tries to have him killed due to his refusal to leave his post. Finally, his troops are plagued with fear. Yi explains to his son that they have to turn the fear of the men into courage. To do this, Admiral Yi knows he must sacrifice himself.

THE ADMIRAL: ROARING CURRENTS shows the power of unity and selfless sacrifice. Admiral Yi won’t allow fear and hysteria to come and cause further doubt and dissension among his soldiers. Yi even kills one of his own soldiers who tried to flee after losing all his friends in battle. This example surprises his men, but there are no more cases of insubordination due to hysteria and fear. Even the Buddhist monks draw swords and join in the battle, and the peasants and civilians play their part to help the admiral hold off the invasion in the end.

The admiral also uses the water with its currents and whirlpools to work in his favor and take down some of his enemy. Yi’s ship is almost taken down by a whirlpool as well, but the townspeople/peasants get in their own boats and row hard to pull the battle ship away from the mouth of the whirlpool. By the end, it’s an all out bloodbath as cannons flare at pointblank range and swords cut and stab. The pirate king still manages to board Yi’s ship to kill Yi himself but Admiral Yi perseveres to behead his treacherous enemy. In the end, Yi holds off the enemy and ally naval forces finally arrive to support Yi’s efforts without losing one ally ship. Once the battle is over, Yi and his son are talking, and his son believes it is the whirlpool that saved them as it took out enemy ships. Admiral Yi Sun-Shin believes it was the people not the whirlpool.

The production quality of THE ADMIRAL: ROARING CURRENTS is excellent. The cinematography and composition of shots is outstanding. The movie is full of great close-up shots that show the emotion and vulnerability of the men and women in the story. One character essential to the story is the water, which can be choppy, calm or full of surprises with its strong currents and whirlpools beneath the surface. The admiral’s character doesn’t seem to be the one that changes, as he is a rock-solid war hero who never loses his integrity or compromises in his fight for what he believes. Thus, it’s really Yi’s men that collectively undergo change. As they see Admiral Yi stand and overcome with his faith and courage against all odds with death seemingly eminent, the men find a new resolve to push past their fears and hopelessness to fight and succeed.

THE ADMIRAL has graphic war violence and some ancestor worship and Buddhist monk characters. The movie has a mixed pagan worldview with false religious elements and some strong moral elements. Admiral Yi leads his men in a dangerous and selfless standoff against the invading Japanese. Redemptive themes of sacrifice are also present. However, Yi prays to his ancestors and is also visited by the spirits of leaders of the past, who come to warn him.