NIGHT AT THE MUSEUM: SECRET OF THE TOMB 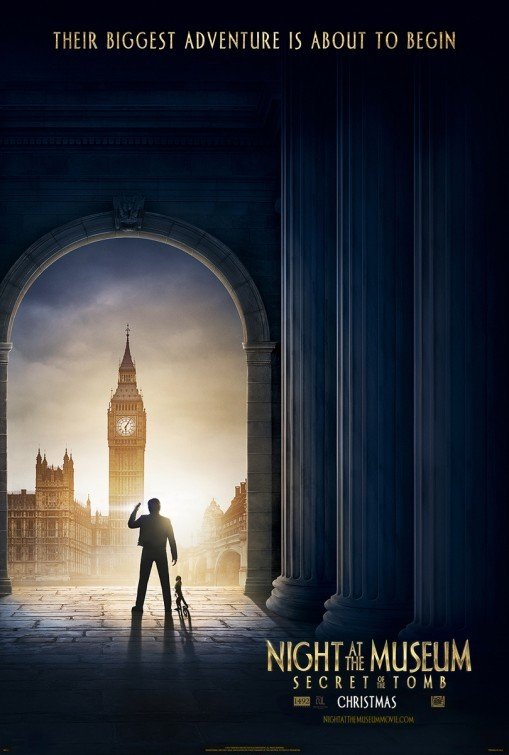 NIGHT AT THE MUSEUM: SECRET OF THE TOMB is a fun conclusion to the comedy trilogy starring Ben Stiller and Robin Williams. The magical tablet that brings the museum exhibits to life is starting to decay. The decay endangers the lives of Larry’s new friends, including Teddy Roosevelt, Sacajawea, Ahkmenrah, and Dexter the monkey. Larry finds out that Ahkmenrah’s father at the British Museum may know how to stop the tablet’s decay. So, Larry, Ahkmenrah and Larry’s son, Nick, go to London to sneak into the British Museum, wake up Ahkmenrah’s father, and find a way to reverse the decay. Unknown to Larry, his other friends have snuck inside the crate carrying Ahkmenrah.

NIGHT AT THE MUSEUM: SECRET OF THE TOMB has plenty of laughs and exciting adventure for the family to enjoy. Some of the laughs are hit and miss, but the ending is pretty good. The biggest problems with the movie are the occult magical tablet and off-color humor. However, the heart of the movie occurs when it extols family, sacrifice, life, and friendship. Caution is advised for older pre-adolescents.

(Pa, BB, C, OO, FRFR, Ho, L, V, S, N, A, M) Light mixed pagan worldview with strong moral premise containing a positive view of family and parenting, plus characters sacrifice their lives for the happiness of others, mixed with occult magical talisman that brings waxworks, statues, bones, and artworks to life and false religious references in one scene to Egyptian sun and moon gods, worshipping spiritual ancestors, worshipping a goat god, and taking a multicultural approach to religion at a museum, but there is later one positive reference to God in a general sense, and there’s a reference to the Exodus in the Bible and the Jewish Passover dinner with some dry humor, plus one minor male character makes comical comments reflecting a homosexual interest to men (he comments on how nice another male character’s blue eyes look); two “h” words, two “d” words and one “My God” profanity, plus jokes in two scenes about a monkey urinating (in one case he urinates on some lava to render it harmless); comical adventure violence with light scares includes character fight a stone multi-headed snake that’s come alive, dinosaur bones chase characters, some pratfalls, characters fight over a magical tablet, objects get smashed, scary stone lions come alive; no depicted sexual content, but one male character expresses homosexual innuendo about another male character’s blue eyes and wants to hold hands with another male character during life and death crises, and female guard shows romantic interest in another character, and later they dance together; brief upper male nudity with cavemen characters; implied alcohol during fundraising dinner gala; no smoking or drugs; and, heroes sneak into a museum, and man steals magical tablet for himself and won’t listen to others, and some tension between father and son, but it’s overcome in a positive way.

NIGHT AT THE MUSEUM: SECRET OF THE TOMB is a fun, ultimately uplifting and fitting conclusion to the comedy trilogy starring Ben Stiller as a night security guard at a museum that comes magically alive each night. It has some issues of concern, however.

In this one, the magical tablet that brings the museum exhibits to life is starting to decay. The museum goes haywire during an important fundraiser, which endangers Museum Guard Larry Daley’s job and that of his boss. Worse, it could drain the life out of Larry’s new friends, Teddy Roosevelt, Sacajawea, Ahkmenrah, and Dexter the monkey.

Larry finds out that Ahkmenrah’s father at the British Museum may know how to stop the magical tablet’s decay. So, Larry, Ahkmenrah and Larry’s son, Nick, go to London to sneak into the British Museum, wake up Ahkmenrah’s father, and, hopefully, find a way to reverse the tablet’s decay. Unknown to Larry, his other friends have snuck inside the crate carrying Ahkmenrah. Along for the ride are Attila, Jedediah, Octavius, and a new caveman who was created to look like Larry and who thinks Larry is his father.

NIGHT AT THE MUSEUM: SECRET OF THE TOMB has plenty of laughs and exciting adventure for the whole family to enjoy. For example, at one point, Larry and his friends must battle a scary stone Chinese hydra snake that comes alive. In another scene, the Lancelot character at the British museum has stolen the tablet and taken it to a performance of the musical play CAMELOT with Hugh Jackman playing King Arthur. This scene is very funny and almost worth the price of admission. Some of the movie’s other jokes are hit and miss, however, or too low key.

The biggest problem with SECRET OF THE TOMB is that it relies on occult magic to bring the wax figures alive and keep them alive. An Egyptian pharaoh, Ahkmenrah’s father, tells Larry that the magical tablet brings things alive because of the Egyptian moon god. The pharaoh also tells Larry that only the Egyptian gods are real, and Larry tells him that, at the museum, they accept and respect every character’s religious beliefs. Of course, this kind of religious pluralism can create, and has created in real life, its own tyrannical, politically correct belief system.

That said, the heart of the movie is really family. There’s a lot of talk about family in SECRET OF THE TOMB. Larry wants his son Nick to go to college, but Nick wants to take year off to see if he can be a success as a deejay. This creates some tension between Larry and Nick. At one point, Teddy Roosevelt tells Larry that he’s done his job raising Nick, and it’s time to let Nick explore some things independently. Ahkmenrah’s story is the opposite. He hasn’t seen his mother and father for centuries and longs to be with them in London. However, if he returns to New York after they fix the tablet, he will never see his parents again. Once again, Teddy Roosevelt comes to the rescue and offers a solution that involves great sacrifice.

All in all, therefore, NIGHT OF THE MUSEUM: SECRET OF THE TOMB is mostly a positive experience. Caution is advised for older pre-teenage children because of the occult magic, a couple scenes of bathroom humor and some scary adventure.

The movie is dedicated to the late Mickey Rooney, who makes a brief cameo, and the late Robin Williams, who plays Teddy Roosevelt. A final scene between his character and Ben Stiller’s will bring some extra unintentional tears because of a final line of dialogue that Robin utters.

Watch NIGHT AT THE MUSEUM: SECRET OF THE TOMB: