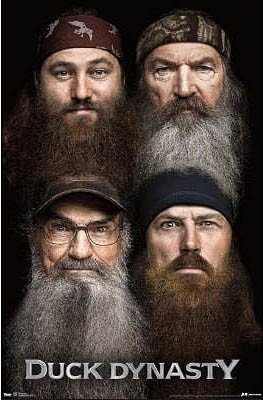 The DUCK DYNASTY episode “A Home for the Holidays” is one of the best DUCK DYNASTY episodes. Willie Robertson announces that this Christmas, the Robertson family and their Duck Commander company is giving a new house to one of their oldest friends, the mother of Willie’s childhood best friend. As some of the men build a front porch for the house, Phil, the family patriarch, helps the wives cook the Christmas feast for the reveal. Meanwhile, Willie, his mother Miss Kay, Uncle Si, and Willie’s children go to a studio to record the family’s new Christmas song.

(CCC, BBB, PPP) Very strong Christian, biblical, moral episode with strong American faith and values, including loving God and loving thy neighbor are extolled and Jesus is lifted up; no foul language; very light slapstick comedy when two men fall off wooden beams in porch being built while they clown around; and, nothing else objectionable.

The program begins with Willie Robertson talking with the DUCK DYNASTY family, including the top employees from the Duck Commander company, about a special gift they are giving this Christmas to one of their closest friends at church, the mother of Willie’s best friend while growing up. They are going to give her a new pre-fabricated house where she can live.

Once the house is in place, Willie’s brothers Jep and Jase and their friends will build a special front porch for the house. Meanwhile, Phil, the family’s patriarch, and a couple of the wives prepare a holiday meal. Also, Willie and his children go to a recording studio to record the family’s annual Christmas song. Uncle Si and Willie’s mother, Miss Kay, are along for the ride.

The reveal of the new house at the end turns out to be one of the most emotional, uplifting moments ever on DUCK DYNASTY. Phil Robertson breaks down as he delivers a prayer about what the other family and their mother has meant to the Robertson clan over the years. He explains that they have known the woman and her family for 40 years because they’ve gone to the same church all that time. In a side interview during the end, Phil mentions the two “greatest commandments,” as cited by Jesus in the Bible – love God and love thy neighbor as thyself. He points out that giving the house to their friend is a prime example of both commandments.

“A Home for the Holidays” contains some lighter moments. Willie typically gets exasperated by Uncle Si’s shenanigans at the recording studio. Also, his mother wants to sing, but she can’t carry a tune at all. In fact, Uncle Si sings one of the Christmas carols he has written himself, but his singing is more like hollering than singing. Finally, Phil chastises the wives for wanting to use a food processor rather than a knife to chop some of the food they’re preparing. He also complains to the boys building the porch outside that they left a hole near the front door where someone could fall and hurt themselves. Phil doesn’t seem to hear his son Jase as Jase explains that they already plan to plug up that hole; they just haven’t gotten to it yet.

All in all, “A Home for the Holidays” is almost a perfect DUCK DYNASTY episode. It reminds fans of the series why they love the TV program: for its faith and family fun.

Watch DUCK DYNASTY: A Home for the Holidays: