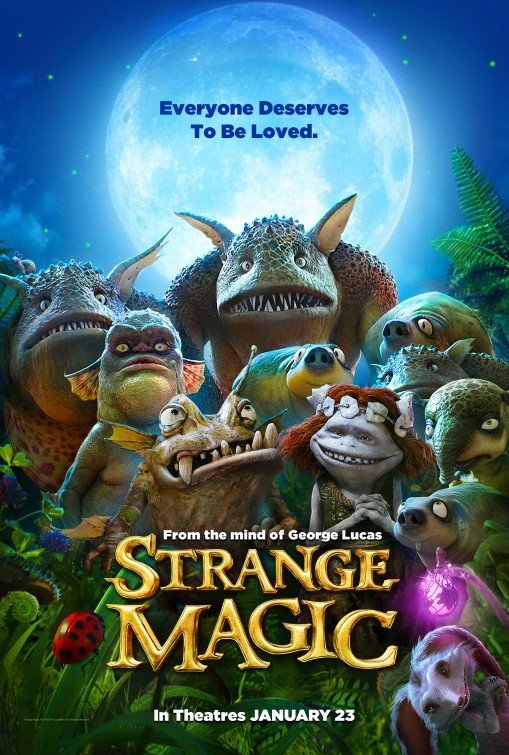 STRANGE MAGIC is an animated fantasy intended for families. The Fairy Kingdom is colorful, festive and full of love, while the Dark Forest is creepy and dark even in the daytime. Primrose flowers separate the two kingdoms and can be used to make a love potion. The Bog King of the Dark Forest has ordered them off limits. Marianne the fairy princess is excited because she’s happily engaged to be married. However, when her fiancé betrays her, she gets involved in her flirtatious sister’s romantic troubles, and peace between the kingdoms is disrupted.

STRANGE MAGIC is full of music with strong vocal performances. The storyline is about falling in love, falling out of love and waiting for love. The worldview is mixed. There’s a strong pagan, magical element due to a central focus on making and using a magical love potion. There are also strong moral, redemptive elements where the plot problems are resolved not because of a magic potion, but because of true love and sacrifice. Overall, therefore, STRANGE MAGIC is mostly wholesome, but caution is advised for children.

(PaPa, BB, C, Ro, V, M) Strong mixed pagan worldview due to magic potion being made and used throughout, mixed with a strong moral elements as fairy princess fights for justice and defends those who can’t fight for themselves, plus light Christian, redemptive elements where true love and sacrifice solve the plot problem, plus some possible but light Romantic elements; no foul language; no foul language; light animated action violence with some scary images and monsters; no sexual content; no nudity; no alcohol; no smoking or drugs; and, betrayal, kidnapping, hatred, deception, lying, stealing, but not condoned, plus fairies, goblins, elves, and imps are characters.

STRANGE MAGIC is an animated fantasy intended for families about two kingdoms that clash and eventually peacefully co-exist when two unexpected individuals fall in love.

The Fairy Kingdom is colorful, festive and full of love, while the Dark Forest is creepy and dark even in the daytime. A border of primroses separates the two kingdoms. These special flowers are the magical secret in a special love potion and are off limits to fairies by order of the Bog King of the Dark Forest.

At the beginning, Marianne the fairy princess is giddy, excited and singing everywhere she goes, happily engaged to be married later that day to Roland. However, Roland is more concerned about his good looks and becoming king so he can have an army, than honoring his commitment to Marianne. She accidentally sees Roland kissing another fairy and so is hurt and vows to never fall in love again.

Marianne’s younger sister Dawn has not given up on love, however. So, Marianne helps her flirtatious sister stay out of trouble. When Dawn’s best friend, Sunny, risks the peril of the Dark Forest to have the Sugar Plum Fairy conjure up a love potion so Dawn will fall in love, things get out of hand. The Bog King is determined to retrieve the potion and pays the Fairy Kingdom a visit.

Will the two kingdoms find a way to see the beauty in each other? Will Marianne find love again?

STRANGE MAGIC is full of music with strong vocal performances from several of the characters. The overall storyline is all about love: falling in love, falling out of love, and waiting for love. Marianne is the character who changes the most. She is at first a hopeless romantic who is made bitter by betrayal, but eventually finds her true love and has a change of heart. The Bog King has gone through the pain of unrequited love as well and hardens his heart. He also changes as he gets to know Marianne. In the end, true love conquers all and unites the kingdoms.

The worldview of STRANGE MAGIC is mixed. There’s a strong pagan, magical element due to a central focus on the making and use of a magical love potion. This potion has the power to make people love someone because of magic, not by free choice. However, the movie also has a strong moral, redemptive worldview where the plot problems are resolved not because of a magic potion, but because of true love. There’s even an element of self-sacrifice.

So, overall, STRANGE MAGIC is a colorful, musical, animated fantasy that’s ultimately worthwhile. That said, the movie’s magical elements and the scene where the heroine sees her first love kissing another fairy warrant caution and discernment for children.