"Mixed Insight into the Golden Years" 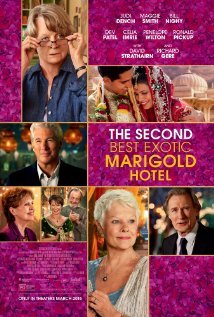 In THE SECOND BEST EXOTIC MARIGOLD HOTEL, hotel owners Sonny and Muriel seek to expand the Marigold into an international chain. Simultaneously, Sonny prepares for his wedding, and the hotel guests come to grips with new life changes. A mysterious American appears, and Sonny takes him to be an undercover hotel reviewer for his financial backers. Instead of focusing on his wedding, Sonny caters to the American’s every need, jeopardizing his marriage. Meanwhile, the elderly residents must navigate old age and new romances.

THE SECOND BEST EXOTIC MARIGOLD HOTEL is rich and vibrant with Indian culture. The story is thought-provoking as it forces viewers to consider the pain of aging while offering advise on making the most of one’s time before it’s too late. There are also genuinely funny moments that endear the characters and their flaws. The movie’s entertainment is tainted, however, by Romantic, pagan elements that include some sexual dalliances of the hotel guests. There is also some minor foul language. THE SECOND BEST EXOTIC MARIGOLD HOTEL isn’t suitable for some media-wise viewers, and so extreme caution is advised.

(RoRo, PaPa, B, AP, CapCap, Ho, FR, L, V, S, N, A, MM) Strong Romantic worldview where characters act primarily on emotion, with some almost anything goes while having a good time pagan mentality, including some characters act without much concern for moral consequences, and physical and material pleasures are esteemed above marriage and morality, mitigated by some moral elements where some lying and cheating is caught and brought to account, and marriage is sometimes extolled, plus a tongue-in-cheek British comments on disliking America after visiting there, with an entrepreneurial pro-capitalist storyline about expanding business and ownership and a brief homosexual reference, and a brief montage of traditional Hindu wedding customs; seven obscenities and profanities with a couple of references to private parts, use of the word “pimping”; light violence when there’s a slap on the face; some sexual elements include an anecdotal comment about a groom and best man found in bed together, implied adultery, married man pursues another woman, implied fornication, and a reference to first time sex; no nudity but there’s a girl in a bikini by the pool; light drinking at dinner or parties; no smoking or drugs; and, a separated couple wants a divorce, lying to spouse and treating some people better than others.

In THE SECOND BEST EXOTIC MARIGOLD HOTEL, hotel owners Sonny and Muriel travel to America to find a backer for their plans to expand the Marigold into an international chain of hotels for the elderly and the beautiful. They want to purchase a second hotel in India and are promised that the investors will anonymously send someone to the original Marigold as a guest to investigate the quality of operations. Meanwhile, young Sonny and his fiancee, Sunaina, are preparing for their wedding rehearsal, but Sonny gets jealous when another young bachelor and family friend, Kushal, starts spending time with Sunaina.

The Marigold’s British residents have all decided to stay and live out their golden years. Evelyn gets offered a job that will require lots of travel, taking her away from her want-to-be suitor, Douglas. Though Douglas desperately wants to marry her, she faces fears of commitment. Meanwhile, married couple Norman and Carol struggle to maintain a monogamous relationship as each suspects the other of having affairs. Also, single lady Madge juggles two wealthy Indian suitors and must choose which one to ultimately marry.

As Sonny and Sunaina’s wedding quickly approaches, a mysterious American, Guy, shows up at the hotel, and Sonny immediately assumes he’s their anonymous reviewer. Instead of paying proper attention to his bride-to-be, he goes out of his way to make sure the American is pleased throughout his entire stay. This strains their already strained relationship. Then, when Kushal ends up pulling the rug out from under Sonny as he buys the second hotel for his own business venture, Sonny’s entrepreneurial dreams and marriage are jeopardized.

THE SECOND BEST EXOTIC MARIGOLD HOTEL picks up where the first movie, released in 2011, left off, but it isn’t necessary to have seen the first to enjoy the second. This sequel is rich and vibrant with Indian culture, especially in showcasing ornate eastern architecture and colorful costumes. The music is paired with choreographed dancing that provides an aural and visual spectacle not easily matched. The movie’s most poignant moments come from the hotel’s co-owner, Muriel, who acts as a parental figure, watching everything take place and having the wisdom to provide valuable insights into the journey of life. The story is thought-provoking as it forces viewers to consider the pain of aging while offering sage advise on making the most of one’s time before it’s too late. There are also a lot of genuinely funny moments that endear the characters and their flaws to the moviegoer.

Though quite entertaining, the movie’s story is tainted by references and innuendoes to the sexual dalliances of the hotel guests. The primary message is that life doesn’t end just because you age, and all of the elderly guests are intent on enjoying what time they have left. There are several implied instances of extramarital affairs, where unmarried partners sleep together, and a man pursues a woman while he’s still married. Some characters place their own physical and material pleasures above their commitments to families and spouses, seeming to ignore any code of morality. However, there are scenes where characters are caught lying or cheating and made to apologize for their hurtful actions or change their behavior. There is some minor foul language as well. THE SECOND BEST EXOTIC MARIGOLD HOTEL isn’t suitable for some media-wise viewers, so extreme caution is advised for all other audiences.