"Before You Give, You Must Forgive" 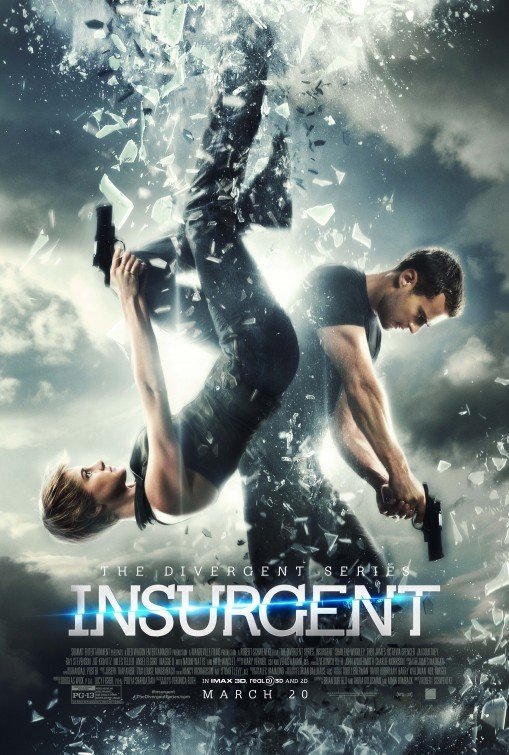 THE DIVERGENT SERIES: INSURGENT is the sequel to last year’s DIVERGENT, based on the young adult novels. After Tris and Four effectively stopped Jeanine from killing off the Abnegation faction, the two Dauntless rebels are now on the run. When the oppressive and evil Jeanine gets hold of an old box that may be the key to gaining more power, she must find every Divergent person she can to unlock the box. Tris and Four get caught in the middle of the conflict while they navigate their feelings for their families and their love for each other.

INSURGENT is exciting and action packed and many will find it just as entertaining, if not more so than DIVERGENT. While the script moves along nicely, the direction isn’t always effective. Like DIVERGENT, the movie has many strong Christian, biblical messages about sacrifice. INSURGENT primarily deals, however, with the theme of forgiveness and fighting injustice. Sadly, there’s an implied sex scene between Tris and Four after some passionate kissing. This, along with some action violence and brief foul language in INSURGENT, requires strong caution.

THE DIVERGENT SERIES: INSURGENT is the sequel to last year’s DIVERGENT, based on the young adult novels of the same name.

After Tris and Four effectively stopped Jeanine from killing off the Abnegation faction, the two Dauntless rebels are now on the run with Peter and Tris’s brother, Caleb. Finding sanctuary in the peaceful non-violent Amity faction, Tris is haunted by the death of her parents who sacrificed themselves for her survival. She’s also haunted by her friend Will’s death, whom she killed in self-defense. She’s decided that she’s deadly and will likely get everyone she cares about dead.

Jeanine and her traitorous Dauntless soldiers find a hidden box in Amity that holds a message from the city’s founders and will possibly be the key for Jeanine’s victory over the factions. The key to unlocking the box lies in those who are Divergent – people who possess the qualities of all five factions and are strong enough to pass the virtual simulation tests of each faction. To unlock the box, Jeanine starts capturing Divergent citizens and hooking them up to the box to see if they’re strong enough to unlock it. If they aren’t strong enough, it kills them.

Jeanine’s troops storm the Amity compound searching for Tris, Four, Peter, and Caleb, Peter betrays the rest of the group and points the Dauntless traitors in their direction, but the three escape. Wandering back into the city, they find shelter among the factionless people, who are led by none other than Four’s mother Evelyn, who was believed to be dead. Four holds disdain for his mother because, when he was young, she fled his abusive father and disappeared. Now, all the people who didn’t belong to any of the five factions have armed themselves and are ready to fight back against Jeanine.

Can they stop Jeanine before she does any more damage? Will Tris be able to forgive herself for some of the choices she’s made before it’s too late?

INSURGENT is exciting and action packed and many will find it just as entertaining, if not more so than DIVERGENT. While the script moves along nicely, the direction isn’t always effective. In multiple shots, actors and actresses are static. Also, the screening this reviewer was in experienced poor 3D effects with lots of blurriness in the motion shots. This also made the CGI look hokey and less realistic. Thus, IMAX 3D is not the recommended format to view this movie.

Like DIVERGENT, the movie has many strong Christian, biblical messages about sacrifice. INSURGENT, however, primarily deals with the theme of forgiveness. Not just forgiving others, but also forgiving oneself for past choices. Selflessness also is explored in INSURGENT, though this message is more strongly exhibited in the final book of the series, titled ALLEGIANT. Finally, INSURGENT also has a strong statement against pacifist actions against great evil. Thus, the heroine passionately fights against the oppressive government leader who’s killing innocent men, women and children.

Sadly, INSURGENT has an implied sex scene between Tris and Four after some passionate kissing. This, along with some action violence and brief foul language, requires strong caution for THE DIVERGENT SERIES: INSURGENT, especially for older pre-adolescents, fledgling teenagers, other sensitive viewers, and media-wise moviegoers.