THE END OF THE TOUR 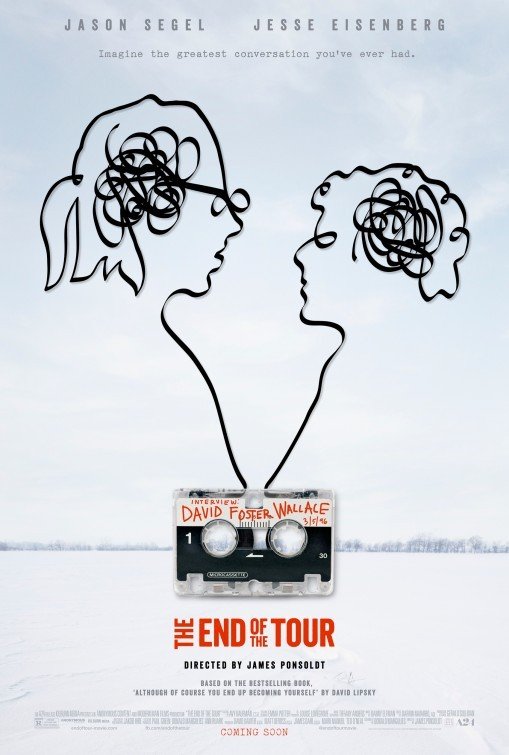 THE END OF THE TOUR is based on Rolling Stone writer David Lipsky’s five days on a 1996 book tour with acclaimed writer David Foster Wallace. The movie opens with Lipsky learning about Wallace’s 2008 suicide. Cut to the five-day interview between with Wallace, which occurred after Wallace’s massive novel, INFINITE JEST, was published. Over the five days, the two men have intense conversations about life and its meaning, fame, acclaim versus true art, and all manner of other deep subjects.

THE END OF THE TOUR is an unusually quiet, thoughtful movie, centering for long stretches on its two stars. Although it’s clear Wallace never found real relief from clinical depression, the movie portrays a man who strived to be as good as he knew how. The movie also shows Wallace was inspired by some local Baptists and by a prayer by St. Augustine. The movie’s quiet nature probably limits its broad appeal, but it’s ultimately a touching, bittersweet movie. However, there’s plenty of strong foul language and some crude moments. So, extreme caution is advised for END OF THE TOUR.

(PaPa, CC, B, LLL, S, AA, DD, M) Mixed pagan worldview with some positive Christian, redemptive references and undertones including one man finds happiness dancing with Baptists at a local church, and there’s an inscription on a wall in his house from St. Augustine about doing his best for God, but this positive content is contradicted by other content and behavior; about 49 obscenities and profanities, including plenty of “f” words and some strong profanities; no violence; several sexual references in dialogue scattered throughout, including man expresses a wish to “get laid”; some alcohol use, including man deliberately drinks a beer in front of another man who says he’s had problems with drinking; man questions another man about his alleged heroin abuse (man is famous for writing about addiction); and, journalist uses an interview opportunity to spy on the person’s private life in man’s own home.

THE END OF THE TOUR is based on the true story of Rolling Stone magazine writer David Lipsky’s five days on a book tour with acclaimed novelist David Foster Wallace 12 years before Wallace committed suicide. THE END OF THE TOUR is touching and bittersweet, but it has a mixed pagan worldview with overt Christian references combined with immoral behavior, including plenty of strong foul language.

The movie opens with Lipsky learning about Wallace’s suicide from clinical depression in 2008. Cut to the story of the five-day interview between Lipsky (Jesse Eisenberg) and Wallace (Jason Segel), which occurred in 1996 after the publication of Wallace’s massive humorous novel, INFINITE JEST. Lipsky was fascinated by Wallace’s thousand-page, heavily-footnoted novel. He convinced his editor at Rolling Stone that Wallace was the “next great American author.”

The editor gave him the chance to spend time with Wallace, who turned out to be extremely soft-spoken yet charismatic. A wildly popular college professor in the middle of Illinois, Wallace nonetheless lived alone and suffered from depression and loneliness. Over the course of their five days traveling together, the two men have intense conversations about life and its meaning, fame versus obscurity, acclaim versus true art, and all manner of other deep subjects.

During their talks, Wallace comes off both extremely depressed through a mental condition he couldn’t control, yet also a spiritually seeking man who said he found his greatest joy “dancing with Baptists” at a local church. He also says his greatest inspiration comes from a postcard with a prayer from St. Augustine about doing one’s best for God. He’s so inspired, in fact, that he’s placed the prayer on his bathroom wall so he would see it daily.

THE END OF THE TOUR is an unusually quiet and thoughtful film, centering for long stretches on its two stars. As David Foster Wallace, Jason Segel delivers an especially Oscar-worthy performance that’s a complete transformation from his usually goofy onscreen persona. Although it seems clear Wallace ultimately never found real relief or solace in Jesus Christ from his clinical depression, the movie portrays a man who nonetheless strived to be as good and spiritual as he knew how. Of course, being good is never enough, because you will die in your sins unless you repent and accept Jesus Christ as your Divine Savior (John 8:24).

The quiet nature of THE END OF THE TOUR probably limits its broad appeal, but it’s ultimately a touching, bittersweet movie about the nature of art and the quest for meaning in life. Sadly, however, despite the movie’s positive Christian references, it presents a mixed worldview with plenty of strong foul language and some crude moments. So, extreme caution is advised for THE END OF THE TOUR.

Watch THE END OF THE TOUR: