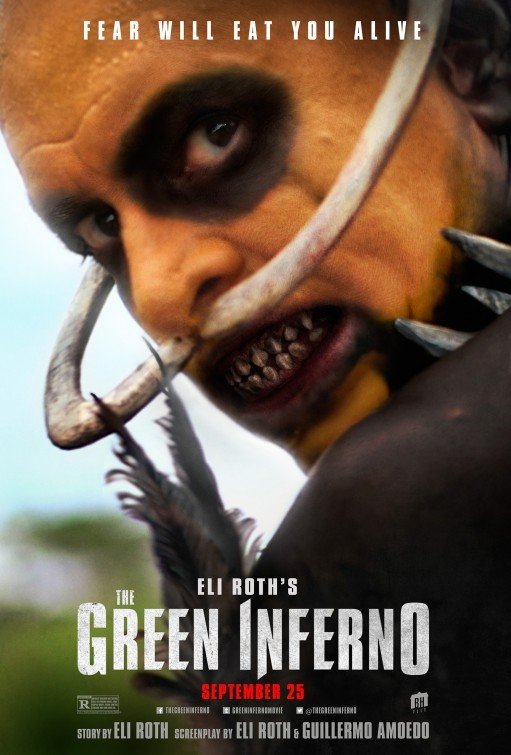 THE GREEN INFERNO takes torture porn to a new level. A college freshman named Justine is goaded into joining a left-wing group. Leading the group is Alejandro, a fiery Hispanic student angry about global companies taking over tribal lands in the Amazon jungle. She and the other students travel to the Amazon to expose one company taking over one tribe’s land. After a tense protest where Justine is set up by Alejandro, the students are forced to fly back to America. However, their small plane has been sabotaged and crashes. The survivors, including Justine and Alejandro, are captured by the tribe they came to help, which turns out to be vicious, hungry cannibals.

THE GREEN INFERNO is one of the most violent movies ever made. It has graphic scenes of mutilation, murder and cannibalism. At one point, the tribe prepares Justine for a pagan sacrifice. The movie also contains lots of foul language and ends on a politically correct lie where Justine turns Alejandro into a hero and says the tribe was really peaceful. THE GREEN INFERNO is totally abhorrent and loathsome.

(RoRoRo, PCPCPC, EEE, AcapAcapAcap, SoSo, PaPaPa, FRFRFR, LLL, VVV, SS, NNN, DD, M) Very strong Romantic, politically correct, leftist worldview promoting a radical environmentalist and anti-capitalist agenda, with some strong socialist implications, that also lies about and hides the truth about a pagan tribe of cannibals; 52 mostly “f” word obscenities and one light profanity; very extreme, gory and gruesome violence includes soldier points gun at female protestor’s head, brutal plane crash with deaths and serious injuries, cannibals take survivors captive and cut one up to eat him, many scenes of cannibalism, body parts cooked, man’s torso is cooked after his limbs, intestines and head are eaten raw, woman slits her thrown and bleeds out, cannibals tie up man and slice him, cannibals strip woman and prepare her for some cannibalistic ritual, people hit with arrows dipped in something to knock them out, soldiers shoot down cannibals chasing woman and attacking them, etc.; pagan priestess checks genital areas of female captives for some sexual, cannibalistic, pagan ritual reason, and some brief sexual innuendo in dialogue; partial image of upper part of a man’s genitals as he urinates, images of woman’s white painted nude body after pagan cannibals strip off all her clothes and paint her, brief and mostly partly obscured upper female nudity, and images of upper female nudity; no alcohol use; man sells marijuana to another man, man smokes said marijuana, leftovers of marijuana are fed to cannibals to get them intoxicated and help captives escape; and, leftist protest leader lies to woman and sets her up so he can get her murder on international TV, and woman later abandons him to cannibals but lies about the whole affair when she returns to civilization, including hiding the truth that the violent tribe she encountered were peaceful.

The story in THE GREEN INFERNO focuses on a college freshman named Justine (played by Eli Roth’s wife, Lorenza Izzo). Justine’s encouraged to join a left-wing group led by Alejandro, a fiery Hispanic student angry about global companies taking over the land of tribes in the Amazon jungle, among other leftwing issues. She and the other students agree to travel to the Amazon and stop one of those companies from taking over one tribe’s land.

After a tense protest where Justine almost gets shot because of a devious plan from Alejandro to set her up as a patsy and a martyr, the students are forced to fly back to the United States. However, their plane has been sabotaged, and it crashes. The survivors, including Justine and Alejandro, are captured by the tribe they came to help, which turns out to be a bunch of vicious, hungry cannibals. Let the slaughter begin.

THE GREEN INFERNO is one of the most violent movies ever made. There are graphic scenes of murder, mutilation and cannibalism. At one point, the tribe tries to turn Justine into a pagan sacrifice that will be consumed.

If all this weren’t bad enough, [SPOILER ALERT] the ending shows a freed Justine giving an international press conference, where she lies about everything, including Alejandro’s duplicitous intentions, makes him into a hero and says she found the tribe to be totally peaceful. Apparently, Justine wants to be the new leader of Alejandro’s radical environmentalist, anti-capitalist movement. A little twist in the last scene shows Alejandro’s sister may expose Justine’s lies, or blackmail her, but the politically correct ending is totally abhorrent, especially considering what really happened between the tribe, the students and the company.

THE GREEN INFERNO also contains lots of foul language, some sexual innuendo and marijuana use. It’s a totally unacceptable movie, even for adults with strong stomachs and big fans of bloody horror movies.