MOOMINS ON THE RIVIERA 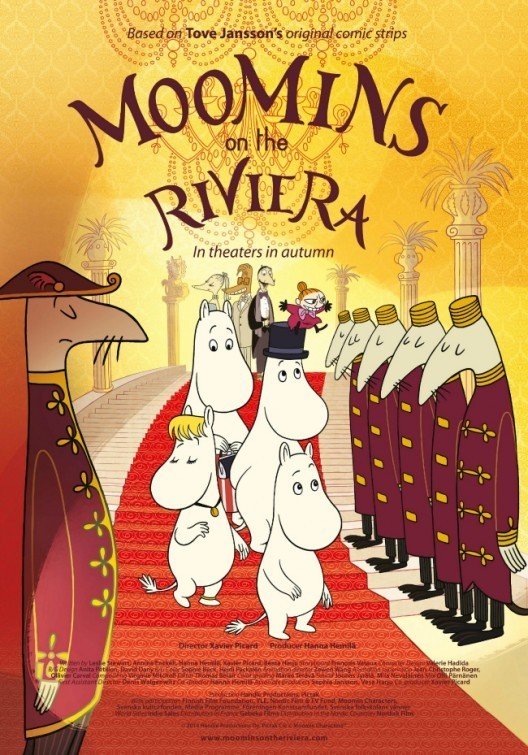 MOOMINS ON THE RIVIERA is an English-dubbed version of an animated movie from Finland about a family of fantasy creatures who live an idyllic life in Moominvalley. There’s Moominpoppa, Moominmomma, their son Moomin, and Moomin’s girlfriend, Snorkmaiden. The Moomins look like hippos but are actually friendly trolls, created before trolls were drawn as ugly and mean. The Moomins decide to visit the Riviera with their friend, a precocious girl named Little My (“May”). Moominmomma becomes concerned when Moominpoppa, Moomin and Snorkmaiden are caught up in the Riviera’s glamour.

MOOMINS ON THE RIVIERA is charming and winsome. One of its funnier twists is that Moominpoppa likes the fancy lifestyle of his new friend, the Marquis, but the Marquis is a suffering artist who longs to experience the “Bohemian” lifestyle of the Moomins. In the end, the Moomins realize what Moominmomma already knows: – that their home in Moominvalley is where their hearts lay. MOOMINS ON THE RIVIERA has some references to drinking whiskey. One morning, Moominpoppa and the Marquis wake up with headaches, implying they drank too much, but the movie never shows drunkenness.

(B, V, A, M) Light moral worldview with the message that home is where the heart lies; no foul language; very light violence such as pirates have two human females tied up and pirate ship wrecks on rocks near coastline, plus storm at sea; no sex; no nudity; references to whiskey drinking, and two characters have hangovers the next morning, but no drunkenness shown; no smoking or drugs; and, gambling at roulette wheel lets female character get money for clothes and to pay bill, pirates are secondary characters in the first act, jealousy, and fantasy creature’s boyfriend is shocked when she wears a black bikini, and he thinks it’s indecent.

MOOMINS ON THE RIVIERA is an English-dubbed version of an animated comedy from Finland based on a famous Finnish comic strip that became popular in England and Europe in the 1950s and 60s. Created in the 1940s by Finnish artist Tove Jansson, the Moomins are a family of gentle trolls with white, roundish bodies and large snouts, who live in Moominvalley by the sea. The Moomins look like hippos but aren’t hippos. The Moomins include Moominpappa, Moominmamma and their son, Moomintroll. The family loves to go on adventures with their friends, which can include humans and other animals and creatures walking on two legs. Moomintroll has a friend named Snorkmaiden, another female troll who often goes with the family on their adventures.

As the movie opens, the Moomins are enjoying a quiet time in Moominvalley, while two humans, Mymble, and her sister, Little My (pronounced “May”), escape from pirates. The pirates left their ship after it ran aground. After salvaging things on the ship, the Moomins hear about the Riviera from Mymble and Little My. They decide to visit the Riviera with Little My and their dog.

When they arrive, Moominpoppa is captivated by the fancy lifestyle of his new friend, the Marquis, and adopts the name “De Moomin,” while Snorkmaiden is captivated by the glamorous fashion. Snorkmaiden parlays the gold coin necklace she wears into a big payday at the roulette wheel, so she can buy some fancy dresses and a black bikini. Moomintroll feels left out by Snorkmaiden’s interest in all the glamour, and even gets jealous when a movie star looking like a dog on two legs shows interest in Snorkmaiden. Also, Moominmomma gets homesick and worries about her husband and son. In the meantime, Little My enjoys herself by making trouble or mocking what’s happening.

MOOMINS ON THE RIVIERA has some references to drinking whiskey. One morning, the Marquis and Moominpoppa wake up with headaches, implying they drank too much, but the movie never shows any drunkenness. Also, of course, there’s the gambling at the roulette table by Snorkmaiden.

Watch MOOMINS ON THE RIVIERA: