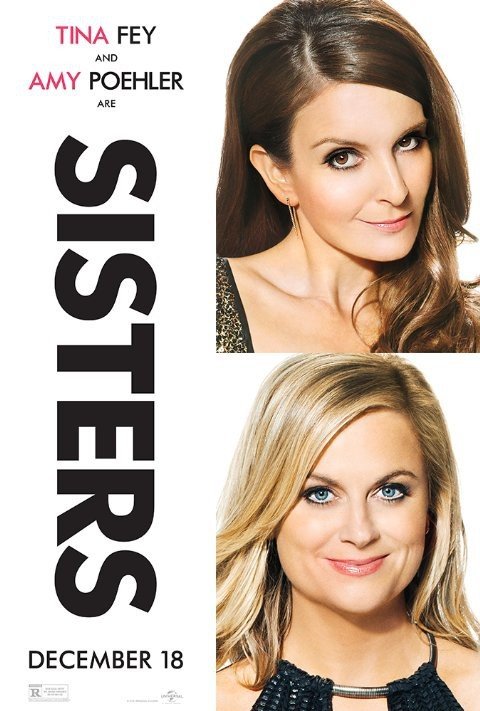 SISTERS stars Amy Poehler and Tina Fey in a comedy about sisters trying to save their childhood home. Amy plays Maura, an organized, friendly nurse, who loves to help people. Her sister, Kate, played by Tina, is different from Maura. Kate’s a hairdresser who’s been fired from her work place, doesn’t have a home and can’t support her teenage daughter. When Maura gets a call from their parents saying they are selling their childhood home, the sisters decide to have a final party. However, the party gets wild.

SISTERS has some funny moments, but it also has a lot of vulgar content. Tina Fey and Amy Poehler are very good at developing their characters. The way the two interact with one another seems very natural and believable. Of course, that’s also due to some excellent writing and good direction. Despite this, many of the movie’s jokes and situations are vulgar and lewd. SISTERS also has a strong Romantic, somewhat hedonistic worldview of follow your heart, do what you want. This, coupled with all the obscenities and vulgar content, make SISTERS unacceptable viewing.

(RoRo, Ho, B, VV, SS, N, AA, DD, MM) Strong Romantic worldview about a dysfunctional family portrayal, which says follow your heart and do what you want, with some homosexual elements, but with some positive moral elements of being family; at least 100 obscenities (about half or so being “f” words), three strong profanities and 15 light profanities, with some vomiting and some scatological jokes, including a really crude situation; strong comical violence includes woman falls through ceiling, two women fall into a pit, man kicks through wall; strong and light sexual content includes mentions of sex outside of marriage, married couple are having sex in a public setting but dressed and only known because of comments, implied fornication, homosexual couple, and kissing; upper male nudity and girls in underwear; drinking and drunkenness; smoking of marijuana that may have jokingly had a stronger drug laced, drug dealer comes to give marijuana to people but presents many drugs as options; and, strong miscellaneous objectionable or problematic content includes dysfunctional family, single mother can’t hold a job or home and her daughter doesn’t know where to live, older parents confess they don’t want to deal with their children any more, and lying.

SISTERS stars Amy Poehler and Tina Fey in a comedy about sisters trying to save their childhood home. SISTERS has some funny parts and is very well made, but it’s marred by a strong Romantic worldview with too much vulgar, immoral content, including many obscenities.

Amy Poehler plays Maura Ellis, an organized, friendly nurse, who loves to help people. Her sister, Kate, played by Tina Fey, is very different from her. Kate’s a hairdresser who’s been fired from her work, doesn’t have a home and can’t support her teenage daughter.

Maura gets a call from their parents saying they are selling their childhood home, so the girls need to come and clean their room out. After arriving, Maura and Kate find a ‘Sold” Sign in their front yard showing that their parents have already sold the house.

Maura and Kate decide to have one last party at the house, to remind them of their high school party days. When the two go to Big Lots to get the party supplies, they run into Kate’s nemesis, Brinda. Brinda is now a big time real-estate agent. Whatever happens, Kate doesn’t want to invite Brinda, but Maura feels compulsive about not including people.

When the party rolls around, it seems like almost everyone is having a mid life crisis. Kate doesn’t want to let the party fail and riles up attendees, while Maura tries to make moves on her neighbor, James. When the party gets too chaotic, Kate gets a call from her parents telling her she will make the profits from the house. Panic ensues, because the partygoers are wrecking the house. So, the question becomes: Will the house be able to withstand this wild party?

SISTERS has some funny moments, but it also has an excessive amount of vulgar, immoral content. Tina Fey and Amy Poehler are very good at developing their characters. The way they interact with one another seems very real and natural to being sisters. Of course, this is also due to a good script and good direction. In fact, the filmmakers have assembled a good supporting cast for their two female stars. Despite the high quality, however, many of the movie’s jokes are vulgar and sexual. This content is not so entertaining, not to mention annoying.

SISTERS has a strong Romantic worldview of follow your heart, do what you want. Also, Kate is a dysfunctional mother, unable to hold a job or a home for herself and her daughter. That said, SISTERS does have some moral, uplifting elements about being a family and supporting each other. Obviously, though, the movie’s excessive, R-rated foul language and vulgar, lewd content should have been cut and/or replaced. See our CONTENT section for details.