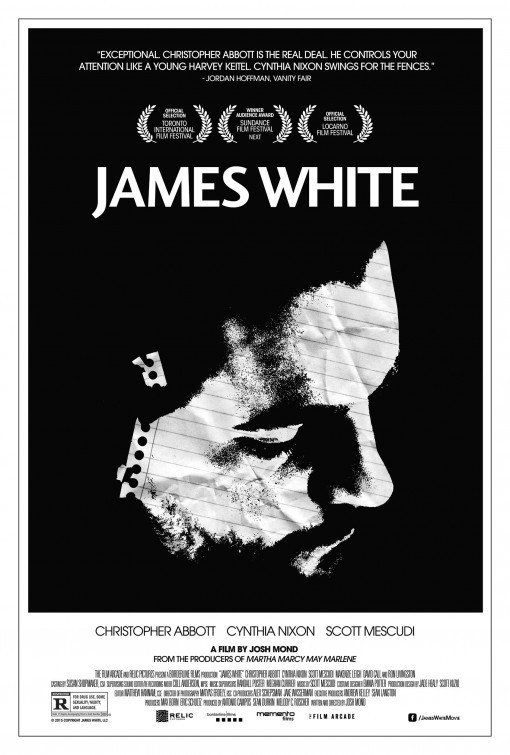 JAMES WHITE is about a troubling young man in his 20s who just lost his father and fears his mother, sick with cancer, will be next. James spends his days drinking, doing drugs and sleeping with women to numb his pain. He blames his father (who left him when he was a boy) for causing him to be this way. Even after a family friend gets him a job interview and his mother sends a counselor to help him, James turns away, continuing down a path of self-destruction.

The most positive note in JAMES WHITE is the acting. Christopher Abbott as the title character and Cynthia Nixon as the terminally sick mother turn in stellar performances. They create an emotionally charged movie, but there’s not much of a character arc. Worse, however, JAMES WHITE is painful and depressing to watch. JAMES WHITE also contains plenty of strong foul language, lewd behavior, and lots of substance abuse, despair and self-destruction. They overwhelm the movie’s all-too-brief Christian, moral elements. JAMES WHITE will turn off most moviegoers and not attract any media-wise viewers.

(RoRo, H, C, LLL, VV, SS, NN, AAA, DDD, MMM) Strong Romantic worldview where protagonist’s emotions overpower his desire to do good works and destructive habits dominate his life, with humanist elements where protagonist doesn’t believe in God and wallows in sin, living for this world and not the next, with some Christian content including people gather together for a funeral, friends fold hands to pray for deceased father, and mother dies in bed with a Catholic rosary in her hand; about 30 obscenities and profanities (including “f,” “s” and “d” words), protagonist throws up and urinates after excessive drinking; moderate violence includes protagonist punches, kicks and pins best friend and bar patrons to the wall, fighting results in a large bloody black eye with scrapes, two friends shove a bartender and steal from his bar, and protagonist yells at his sick mother; strong sexual content includes protagonist sleeps with different girls and protagonist cheats on girlfriend; upper female and male nudity; heavy drunkenness, man drinks bottles of vodka and whiskey alone, man wakes up drunk in hotel room with women, man blacks out regularly from drinking; illegal drug use, man uses cocaine and ecstasy, man invites girlfriend to take drugs with him, and college kids snort cocaine and take pills at party; and very strong immorality includes lying, stealing, cheating, greed, and extreme disrespect for parents.

JAMES WHITE is a deeply disturbing film about a young man’s destructive habits to avoid the pain in his life.

The movie begins with the recent death of James’ father. When James walks into his home to find a room full of grieving guests, he demands that they leave. He refuses to pay respects to his dead father, who left him and his mother to start a new family with another woman. His inability to understand how his mother can shed tears after his father left them further angers him. His mother tries to calm James down, telling him that without his father she wouldn’t have him, but this just further enrages James. He yells at his mother and storms out of the house.

James wallows at a nearby bar. His best friend, Nick (Kid Cudi), joins him. They order drinks as James vents about what a horrible father he had. Some drunken girls nearby talk loudly near James. This annoys James and he calls them the “c” word. One of the girls walks over to James and dumps her drink on his head, making it known you don’t talk to women like that. The bartender sarcastically makes fun of James, causing James to explode in anger. James grabs the bartender, and Nick begins punching him.

While Nick slams the bartender down, James jumps behind the bar and steals a bottle of vodka. James and Nick run out of the bar, laughing at their triumph in escaping the police.

That night the boys celebrate at a club with heavy drinking and dancing provocatively with women. The next day, James wakes up with a terrible hangover and returns home.

His mother, deeply troubled by her son’s black eyes and the stench of alcohol on his clothes, begs him to get his life together. However, James ignores her and crashes on her couch instead.

A few days later, his mom is diagnosed with cancer. James, distraught at possibly losing his mother to cancer, continues to party to distract himself from feeling any pain.

James drinks, does drugs and sleeps with women daily. His mother urges him to get his act together and get a job. James decides to take time off from life to find himself. He travels to Mexico to take a break from life. During his time down there, he falls for a girl who takes illegal drugs with him, making his bad habits seem somewhat okay.

On one evening out in Mexico, James gets an alarming call from his mother, who thinks she’s dying. James takes the next flight back home, bringing his girlfriend with him. Jame’s moves back home and hires in care help for his mother. As his mother’s health declines, his partying habits increase.

A family friend who sees potential in James offers him a job, but when James arrives to the interview drunk from the night before, he tells him not to call him until he gets his act together. James angrily storms out of the office and goes to a bar for a drink, denying any sign of hope he will ever change. James returns home to care for his mother. This seems to give James the only sense of responsibility in his life, but will he ever get his act together before his mother dies?

The most positive note in JAMES WHITE is the acting. Christopher Abbott as the title character and Cynthia Nixon as his mother turn in stellar performances, creating an emotionally charged movie, but there’s not much of a character arc. Worse, however, JAMES WHITE is painful and depressing to watch. The ending is open ended, so there’s no closure for the viewer. Finally, JAMES WHITE contains plenty of strong foul language, lewd behavior, and lots of substance abuse, despair and self-destruction. They overwhelm the movie’s all-too-brief Christian, moral elements. JAMES WHITE will turn off most moviegoers and not attract any media-wise viewers.