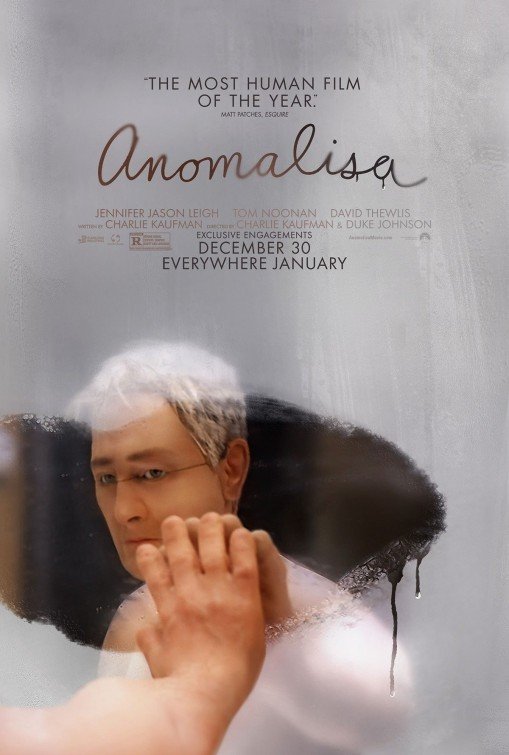 ANOMALISA is an animated drama about a traveling business speaker who spends a lonely night in a Cincinnati luxury hotel. The movie’s story follows Michael Stone, a smooth, semi-famous business speaker, as he lands in Cincinnati for another in an endless series of traveling customer-service seminars. From the start, it’s obvious he’s a miserable man, estranged from his wife and young son. After being rebuffed by an old mistress, Michael convinces a young woman to come to his room alone. Emotional complications ensue. Also, throughout the movie, Michael has bizarre panic attacks where he thinks he’s a robot, or is harassed in bizarre ways by hotel staff.

ANOMALISA is an odd, yet sometimes endearing, character study of a man whose loneliness and adulterous behavior are starting to have a sad effect on his psyche. The stop motion animation adds little or nothing to the movie’s slim, simple story and plot. If live actors had been used, ANOMALISA would interest nobody. ANOMALISA’s Romantic, immoral worldview, extreme lewd content, alcohol abuse, and strong foul language will turn off most moviegoers, especially media-wise viewers.

(RoRoRo, HH, LLL, SSS, NNN, AAA, MM) Very strong Romantic worldview, with some bleak humanist elements and tonality, about an adulterous married man famous for his public speaking, filmed using stop-motion puppets; at least 49 obscenities (mostly “f” words) and 12 profanities; no violence; prolonged, graphic adulterous sex scene and previous adultery is implied, plus drunken protagonist buys his young son a sex-themed doll with an exposed female breast on it when he accidentally walks into a sex-toy store rather than a normal toy store in the middle of the night; full frontal male and female nudity; excessive alcohol use as protagonist gets drunker throughout the movie; no smoking or drugs; and, protagonist emotionally manipulates the woman into sleeping with him.

ANOMALISA is an animated drama about a traveling business speaker who spends a lonely night in a Cincinnati luxury hotel and winds up having an adulterous one-night stand with a fan. ANOMALISA is an odd little movie with a strong Non-Christian, Romantic worldview, extreme lewd content and strong foul language.

The movie’s story follows Michael Stone (voiced by David Thewlis), a smooth and semi-famous business speaker, as he lands in Cincinnati for yet another in an endless series of traveling customer-service seminars. From the start, it’s obvious he’s a sad and miserable man, speaking with his wife by phone as it’s revealed he’s in a loveless marriage. He also tries to avoid his young son’s conversation as well.

When Michael checks into a luxury hotel, he appears lonelier than ever and starts thinking about a romantic interest from past trips to the city. He calls the woman up and asks her for drinks, but she’s immediately bitter with him and storms out of the hotel lounge.

Moments later, he sees two women sitting together at another lounge table staring at him excitedly. He approaches them and finds they are fans from another city who have flown into town to see his seminar the next day. Soon, he convinces the younger, more insecure woman, Lisa to come to his room for a drink, which of course leads to the pair committing adultery.

There are emotional complications from there. Also, scattered throughout the movie, Michael is shown having bizarre panic attacks where he thinks he’s a robot, or is harassed in bizarre ways by hotel staff. Put it all together, and ANOMALISA is an odd, yet sometimes endearing character study of a man whose loneliness and adulterous behavior are starting to have a sad effect on his psyche.

The strange thing about the movie is the choice to have all the characters be depicted through puppet-style, stop motion animation. For some reason, Writer and Co-Director Charlie Kaufman decided to use some sort of cloth-based figures that aren’t quite puppets to represent the people rather than using human actors. The result is visually fascinating throughout. You’ve never seen anything like this movie before.

However, it’s a shame that this amazing technology is put into the service of such immoral ends, with the characters shown in full nudity before, after and during a prolonged adulterous sex scene. While Michael is shown appearing to feel guilty about his affair and others like it, the awkward and shy Lisa is shown as feeling set free and happy emotionally after her one-night stand. Finally, if actual actors had portrayed the roles in such slight material, the very simple screenplay would be exposed for its boring weaknesses.

Ultimately, ANOMALISA is an odd little movie that doesn’t have much in the way of a plot. It graphically depicts adulterous sex without real consequences and involves a lot of strong foul language and alcohol abuse. With a strong Romantic, immoral worldview, ANOMALISA is a movie media-wise moviegoers will want to avoid. Moviegoers who aren’t media wise won’t find much of interest here, either.