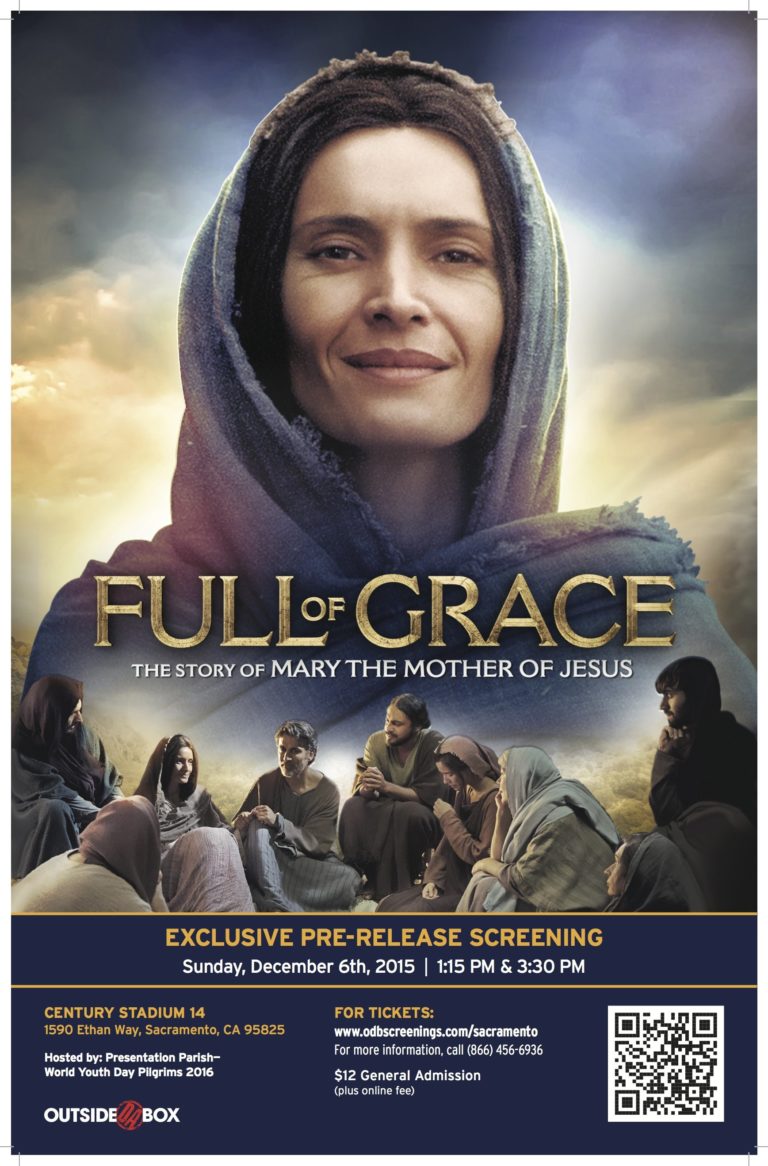 FULL OF GRACE depicts Christ’s disciples, years after His ascension, doubting their calling. Peter fears that the growing number of heresies may outweigh the truth of the Gospel. Mary, on her deathbed, offers him encouragement to continue spreading the Good News. She teaches that, although great suffering is required of those in God’s family, they must continue doing what Christ asked of them, because the rewards will be much greater than the pain in the end.

FULL OF GRACE is beautifully made and brings a captivating new perspective to the Gospel story. Noam Jenkins and Bahia Haifi deliver emotionally convincing performances as Peter and Mary, presenting almost a mother/son relationship. There is little dialogue or action in FULL OF GRACE. This makes the story slow in some places. Overall, however, the movie is well made and will bring joy to its viewers. Although this exact story isn’t told in the Bible, it remains biblically and historically accurate. Writer/Director Andrew Hyatt respects Mary’s role in the disciples’ lives and stresses her wisdom and kindness as commendable. FULL OF GRACE has no questionable content.

(CCC, BBB) Strong Christian, biblical, moral worldview promotes evangelization and relationships to fellow believers, biblical setting and characters, and references to Jesus, God and prayer throughout; no foul language or obscenities; no violence; no sexual content; no nudity; no alcohol use; no drug use; and, no miscellaneous immorality or worldview problems.

In the Bible, we are told that the Disciples obeyed Christ’s call to take his message to all corners of the earth. The Acts of the Apostles give us some background of the miracles they performed and some of the things they taught. However, we don’t get much information from the Bible on how they dealt with the emotional stress of evangelizing. They had little guidance other than what Jesus left them with, so they had to figure it out on their own. There were new heresies popping up every day, and the disciples were faced with the task of defending their faith against these and correcting those who believed the heresies.

FULL OF GRACE tells the story of Peter (Noam Jenkins), who is conflicted by the responsibilities of being Jesus’ disciple in an age of persecution. Lost for a solution, Peter turns to someone who knew Christ better than anyone else, His mother, Mary.

Although Mary (Bahia Haifi) is sick and being cared for by her handmaid Zara (Kelsey Asbille), she provides rest and wisdom to Peter as he seeks counsel on leading the other disciples. He doubts himself, wondering why Christ chose him even though he was a simple fisherman. He doubts his ability to speak the truth. He worries over the many heresies that plague the early church. Mary tells Peter that as long as he trusts in God, he has nothing to fear.

In the end, Mary dies peacefully, surrounded by people who respected and loved her as a mother. She delivers a speech to the group, saying she sees God’s face in each one of them. She says that some suffering is required of those in Christ’s family, but the rewards at the end will outweigh the pain.

Director and writer Andrew Hyatt uses flashbacks to show emotion as Peter and Mary remember what life was like before Christ’s arrival. In the flashbacks, Mary walks through a field of wildflowers, and Peter stands in a fishing boat casting his net into the sea. These images pop up several times throughout the movie as Peter and Mary reminisce.

With no action and little dialogue, FULL OF GRACE has a slow pace. However, it is short, so the slowness is still bearable. It is also beautifully filmed; the lighting and setting are aesthetically pleasing. Although this exact story is not told in the Bible, it remains biblically and historically accurate. It brings a fresh perspective to the Gospel story, because there aren’t many stories of Mary after Jesus Christ’s resurrection. Hyatt respects Mary’s role in the disciples’ lives and emphasizes her wisdom and kindness as characteristics to emulate. FULL OF GRACE has exemplary Christian and Biblical content. There is no questionable content.