HILLARY’S AMERICA: THE SECRET HISTORY OF THE DEMOCRATIC PARTY 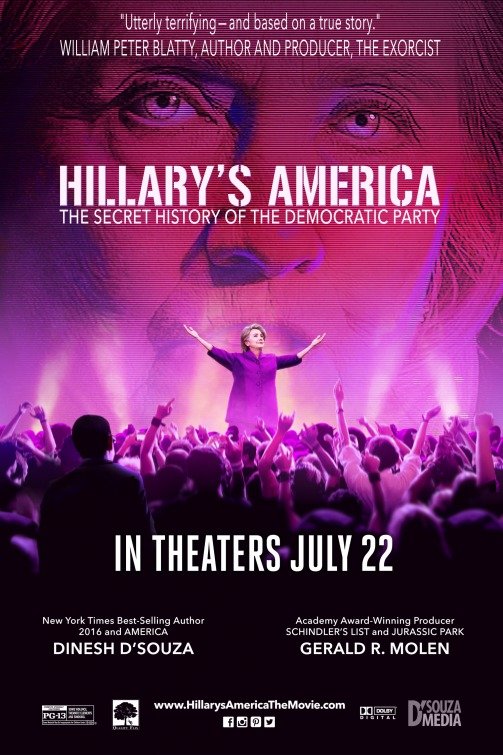 HILLARY’S AMERICA: THE SECRET HISTORY OF THE DEMOCRATIC PARTY is a documentary detailing conservative author and activist Dinesh D’Souza’s battle to find out how the Democratic Party became so evil. Using extensive re-enactments and lots of factual information, D’Souza notes that all criminal enterprises have the ability to deceive and deny. By that standard, he claims the Democratic Party is a de facto criminal organization. He then goes through the party’s historical record of supporting racism, slavery, forced segregation, and corrupt government. Finally, he shows how Bill and Hillary Clinton fit into this nefarious pattern.

HILLARY’S AMERICA is a documentary with a strong point of view. As such, it plays strongly to its conservative viewer base. However, D’Souza makes his case using facts rather than innuendo, slander or other unjust means. As a result, HILLARY’S AMERICA is a refreshingly gutsy movie that every voter should see. The documentary provides voters with essential information yet still feels utterly entertaining. HILLARY’S AMERICA warrants caution, however, for some depictions of violence caused by Democrats, including lynchings, and discussion of Bill Clinton’s numerous adulterous affairs.

(BBB, PPP, CapCap, VV, S, M) Very strong moral, patriotic worldview in a documentary detailing the Democratic Party’s history and its support for slavery, forced segregation and oppression, with an occasional pro-capitalist message; no foul language; numerous implied or discreetly shown violent images, including slaves being whipped and then suffering in agony, implied rape by President Andrew Jackson of a female slave, lynchings, Civil War gun battles, and then numerous news clips of street riots and other real-world violence from the 1960s onward; implied adultery and discussion of adultery in a lengthy section describing the lives of Bill and Hillary Clinton that shows several women at various times climbing out of the backs of limousines adjusting their skirts as if they had just had sexual relations with Bill Clinton, narrator discusses Bill Clinton’s numerous affairs and accuses Bill and Hillary Clinton the couple of covering up for each other (the allegation is that Bill provides Hillary with a friendly public image that makes her controversial political ideas more palatable, while providing Bill with a happy wife image that confuses the public when people accuse Bill of having numerous affairs), plus footage is shown of a woman tearfully accusing Bill Clinton of violent rape and the evil origins of Planned Parenthood and its continuing racist agenda are strongly depicted as well; no nudity; no alcohol; some smoking but no drugs; and, the racist policies of the Democrat Party throughout its history are discussed and rebuked and movie discusses the corruption, thievery and duplicity used by the Clintons, President Obama and their guru, leftist radical Saul Alinsky, who dedicated his book RULES FOR RADICALS to Lucifer.

The movie opens with an explosively funny, fast-paced set of campy credits. The story of how D’Souza suffered an incredibly unfair sentence for a relatively innocuous violation of election fraud laws, in which he donated more than the legal limit to a friend whose candidacy he supported. Thus, the movie claims that D’Souza’s sentencing came as politicized retaliation for his previous anti-Obama documentaries.

Once in prison for eight months amid all manner of violent inmates, D’Souza quickly learns there are patterns to all giant criminal enterprises. He notices that, by using that standard, the Democratic Party is a de facto criminal organization. Key among the party’s criminal, villainous principles are the ability to deceive and deny. D’Souza quickly shows examples of how the Bill and Hillary Clinton have been caught repeatedly doing such things.

Once this fascinating revelation is established, using a good deal of surprisingly clever humor and extremely compelling re-enactments, D’Souza then takes viewers back through the history of the Democratic Party. Along the way, he shows that Democrats wanted to preserve slavery and how they began and fostered the racist “Jim Crow” laws after they lost the Civil War, while Republicans, from their party’s inception, led the fight against slavery and advocated equality under the law.

D’Souza goes on from there to show how history has twisted the Democratic record on women’s rights, including suffrage. He is especially strong revealing the evil and racism inherent in the foundation and ongoing operations of Planned Parenthood, the pro-abortion group that unjustly receives taxpayer dollars from America’s local, state and federal governments. Things get really fired up, however, when D’Souza shares the story of leftist radical Saul Alinsky and reveals that one of his closest disciples was a young Hillary Clinton.

Finally, through often humorous reenactments and sharply pointed wit, D’Souza portrays the establishment of Bill and Hillary’s marriage as one of calculation and convenience. After discussing the cover-up of Bill’s numerous affairs, which include allegations of rape, D’Souza makes his case for believing that the Clinton’s are plotting even worse things if she’s able to win the White House in this November’s presidential election.

HILLARY’S AMERICA is a documentary with a strong point of view. As such, it plays strongly to its conservative viewer base. However, D’Souza makes his case using facts rather than innuendo, slander or other unjust means. As a result, HILLARY’S AMERICA is a refreshingly gutsy, important movie that everyone opposed to Hillary will want to see and that every American voter should see. D’Souza’s command of filmmaking has grown. He has recast himself as a conservative Michael Moore, but with facts and truth on his side. HILLARY’S AMERICA is a documentary with essential information for viewers, but one that still feels entertaining.

Watch HILLARY’S AMERICA: THE SECRET HISTORY OF THE DEMOCRATIC PARTY: