"Dying Father Passes on His Legacy to His Son" 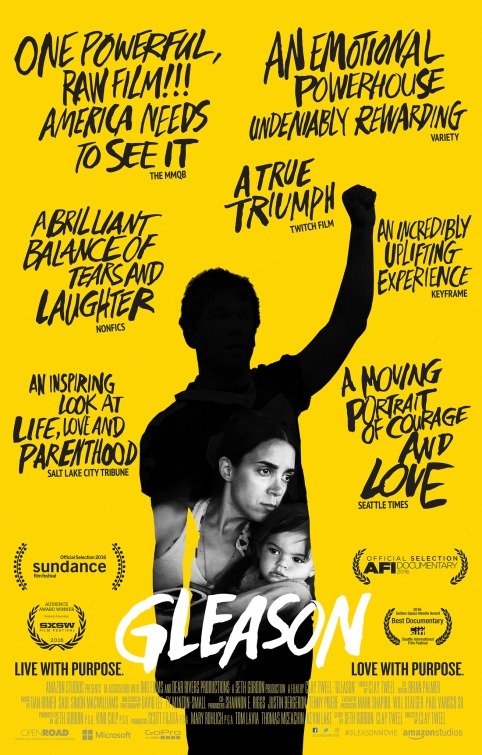 GLEASON is a truly profound, immensely moving documentary about a professional football player for the New Orleans Saints, Steve Gleason, who’s diagnosed with ALS. After a successful career in the NFL as a Safety for the Saints, including an infamous blocked punt that set the Saints on a victory game after the tragic hurricane Katrina, Steve decides to hang up the jersey and retire. He finds out, however, he has ALS and his wife is expecting a baby. So, Steve decides to start a video journal so he can pass on bits of himself to his future son.

GLEASON is one of many stories about individuals suffering from ALS. However, what Steve Gleason accomplishes, and continues to accomplish, through his disease is incredible. Steve struggles with faith, and what it means when you’re not healed by God, yet he presses forward, even in the hopeless times. GLEASON is a very well structured documentary, with moments of deep sadness, as well moments of joy and inspiration. It’s nearly a guaranteed tearjerker. Strong caution is advised due to some “f” words and naturalistic nudity.

(BBB, CC, FR, Ab, LLL, V, NN) Very strong moral worldview of fatherhood, passing on legacy’s to children, loving spouses unconditionally, seeking reconciliation with family, the immense sacrifice family and friends make for one another, with strong moments of faith, as well as struggles of faith when main character deals with not being healed by God and then disagrees with his father’s “name it and claim it” view of faith (they even argue about specific Bible passages), but the main character still holds onto faith in the end, man has tattoo of cross on his back, and a crucifix sits on a shelf, plus earlier camera footage of main subject saying he doesn’t believe in the fear the Bible talks about, but instead believes in love, a picture of couple meditating in a New Age fashion; 27 obscenities (half of which are “f” words), two profanities and graphic discussion of bowel obstruction in a medical context; no violence, but discussion of medical conditions, and a woman gives birth; no sexual content; upper male nudity, women in a two-piece bathing suit, brief frontal and rear male nudity in a naturalistic setting; no alcohol use; no drug use; and, some dysfunctional family behavior, which are repented of, but no other immoral content.

After a successful career in the NFL as a Safety for the Saints, including an infamous blocked punt that set the Saints on a victory game after the tragic hurricane Katrina, Steve decides to hang up his jersey and retire. Newly married, Steve is ready to start have children with his wife, Michel. In 2011, however, Steve’s life changed dramatically when he was diagnosed with ALS. To make things even more complicated, weeks after the diagnosis, they learn that Michel is pregnant.

Knowing that within a matter of time he will lose control over his muscles, his speech and even his breathing, Steve decides to start of a video journal so he can pass on pieces of himself to his son. As Steve contemplates family relationships, faith, death, and what it means to live life to the fullest, some challenges and pain come to the surface. Growing up in a dysfunctional family, Steve had a strained relationship with his father, and even when his Dad became a Christian, some of those tensions still exist.

For example, not long after Steve’s diagnosis, his dad convinces Steve and Michel to come to a healing service at a church. After some prayer and a song, the pastor challenges the attendees to test the healing, and Steve decides to run full speed in the church, only to fall flat on his face. This understandably angers Michel. After several conversations over the coming years about faith, Steve angrily tells his father one evening to stop questioning his faith, affirming that “his soul is saved.”

As Steve’s health worsens, the challenges of basic life functions becomes more excruciating, especially for Michel, who feels immense pressure. Through it all, however, Steve continues to pass on wisdom, values and love to his toddler son River, and his wife heroically stands by his side.

GLEASON is one of many stories about individuals suffering from ALS, but what Steve Gleason accomplished, and continues to accomplish through his disease is incredible. With a resolve to pass a legacy down to his son and to live life to the fullest even in extreme trials, Steve not only offers hope, but also an example for how all of us can be better children, better parents and better spouses.

While faith is addressed in the beginning, the subject becomes a struggle as Steve isn’t healed, but in fact becomes worse. Steve disagrees and is even hurt by his father’s “name it and claim it” type of faith. Steve says he does have faith, and eventually he and his father do reconcile.

GLEASON is very well structured, with moments of hopelessness, as well moments of joy and inspiration. It’s nearly a guaranteed tearjerker.

Strong caution is advised, however, due to some foul language and naturalistic nudity.