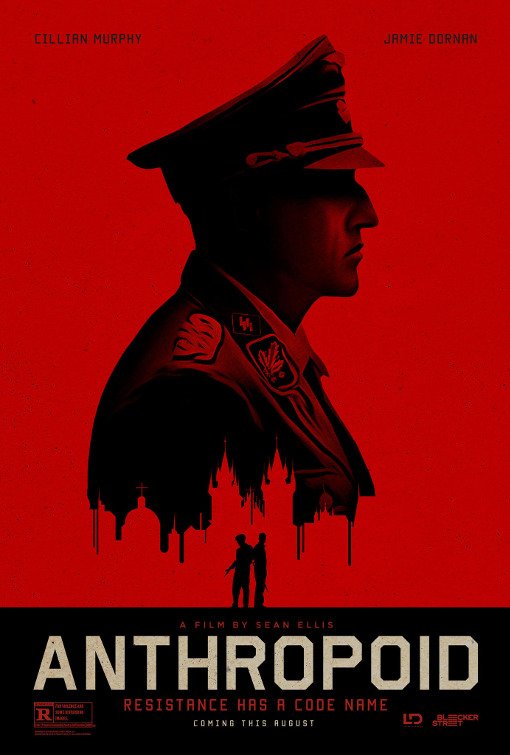 ANTHROPOID opens with two men parachuting into occupied Czechoslovakia in December 1941. Their mission, from the Czech government in exile, is to assassinate SS officer Reinhard Heydrich, the brutal leader of the National Socialist forces, who is chief architect behind Hitler’s “Final Solution” to murder all Jews. At first, some Resistance leaders in Prague are reluctant to join in the mission, because of the awful reprisals sure to occur if anyone attacks Heydrich. However, orders are orders, and the arguments for the attack win the day, but will the assassination plot succeed?

Even if you know the outcome, ANTHROPOID is a riveting, heroic war drama with strong, positive Christian references. The climactic battle takes place in a Christian church. The biggest drawbacks are a sometimes slow first half, a quick shot of an unmarried couple in bed together and some very strong violence as the Czech patriots make their final stand. Some violence includes several suicides when people take their own lives instead of being captured and tortured. The foul language is minimal, however. That said, extreme caution is advised for ANTHROPOID.

(CC, BB, L, VVV, S, A, D, M) Strong Christian, moral worldview in a story from World War II about killing a notorious National Socialist, who helped create the Holocaust’s mass murder of Jews and who murdered many other civilians, mitigated by a light visual reference to an unmarried couple in bed together, with positive references to Christianity and Christian faith, priest hides Resistance fighters in his Orthodox church, and final battle takes place inside the church; one possible obscenity and two light profanities; very strong and strong violence with some blood spurting includes people shot in head or body, people and soldiers die in explosions, intense gun battles, German soldiers repeatedly storm church where Resistance fighters are holed up, images of tortured teenage boy’s bloody face and shirt, man has been beaten, woman punched hard in stomach, dead woman’s face shown, people commit suicide with poison and/or gun shot to avoid being captured and tortured, Germans send hoses of water into church basement where Resistance fighters are hiding, man has bloody wound on foot; quick shot of unmarried couple in bed when someone accidentally catches them, and a couple kisses; no nudity; alcohol use; smoking; and, treason and betrayal.

ANTHROPOID is a riveting, inspiring movie about the men and women during World War II who sacrificed their lives to kill one of Adolf Hitler’s chief architects behind the Holocaust, the mass murder of about six million Jews. Ultimately, despite a sometimes slow first half, ANTHROPOID is an heroic story about some brave, mostly Christian men and women who took a stand against despicable evil, but it has some very strong violence, so extreme caution is advised.

The movie opens with two men, Josef and Jan, parachuting into occupied Czechoslovakia in December 1941. Their mission, from the government in exile in London, is to assassinate SS officer Reinhard Heydrich, the brutal leader of the National Socialist forces, who is also one of the, if not THE, chief architect behind Hitler’s “Final Solution” to murder all the Jews in Europe.

At first, some of the Resistance leaders in Prague are reluctant to take part in the mission, mostly because of the awful reprisals sure to take place if anyone attacks Heydrich, whether they succeed or not. However, the arguments in favor of the attack, including the decision by the exiled government leaders in London wins the day.

Is the assassination plot just a suicide mission with no chance of success?

The first half of ANTHROPOID is sometimes a little slow. Otherwise, however, it’s a riveting, heroic World War II drama with strong, positive Christian references. In fact, the climactic battle takes place in a Christian church, reminiscent of the courageous battle at the Alamo when another group of patriots took a stand against tyranny. In this case, it’s a fight for freedom against the tyranny of modern National Socialism. The heroism of the Czech patriots at the end is amazing and heartfelt.

The movie’s only content drawbacks are a brief shot of an unmarried couple in bed together. Later, though, the couple announces their intention to get married. Also, the movie, especially the second half, has a lot of strong and very strong, intense violence, with some graphic images of blood. Besides violent gun battles with grenades exploding, the violence includes a few suicides when people take their own lives (by poisoning or shooting themselves), instead of being captured and tortured by Hitler’s minions. It also includes a scene where a teenage boy has clearly been tortured by the Nazis to gain information from him, and a scene where a man has been beaten as well, but not as much. In another scene, one of the Nazi interrogators punches a woman in the stomach when she speaks out. ANTHROPOID contains a minimal amount of foul language, however.

That said, extreme caution is advised because of the violence.