"Coming of Age in a Foreign Land" 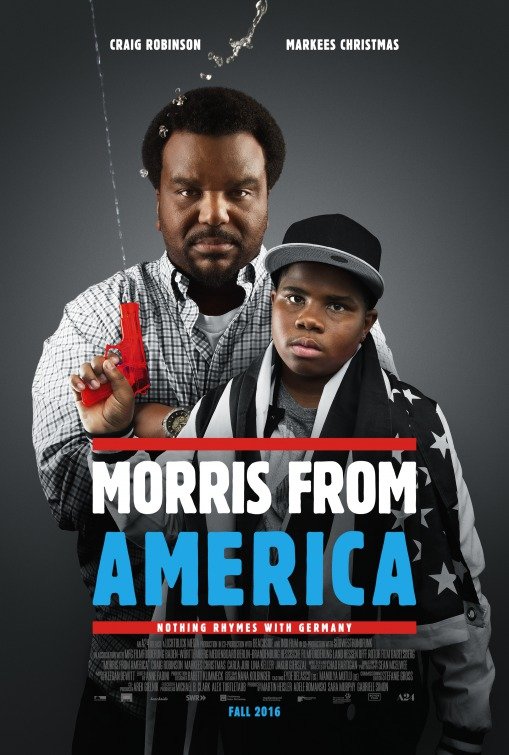 MORRIS FROM AMERICA focuses on a 13-year-old African-American boy named Morris, who’s forced to move to Heidelburg, Germany by his father, Curtis, after his mother dies. The story is a slice-of-life portrait of Morris dealing with early-teen rebelliousness at the same time his world has turned upside down. A mysterious 15-year-old German girl named Katrin invites Morris into a world of teen partying and confusing relationships. Can his father and a compassionate German-language teacher steer Morris in the right direction?

MORRIS FROM AMERICA is a touching portrait of father-son relationships. It’s a much-needed positive portrayal of an African-American father who truly cares for and is involved in his son’s life. There are some nice scenes where the father and the boy’s German-language teacher try to help Morris. The acting is pretty good too, especially by Craig Robinson and Markees Christmas as the father and son. However, MORRIS FROM AMERICA has an extreme amount of foul language. Also, the movie takes a realistic approach toward portraying teenager rebellion, including drunkenness and drug use. So, MOVIEGUIDE® advises extreme caution for MORRIS FROM AMERICA.

(PaPa, B, LLL, V, SS, AA, DD, MM) Strong mixed pagan worldview mitigated by some moral elements in a coming-of-age tale about a 13-year-old black teenager living in Germany with his widowed father; at least 150 obscenities and profanities with some vulgar rap lyrics and some racist remarks; during a fight a younger teenage boy charges an older boy and slams him into a wall, resulting in a small cut seeping blood in the back of the older boy’s skull; strong sexual references include 13-year-old title character is attracted to 15-year-old girl who has implied fornication with a college-age male and later writes she’s moving in with the man, some vulgar rap lyrics, teenagers kiss at party, woman talks dirty to man over the phone; no nudity; adults drink alcohol, teenagers drink alcohol at party and some get drunk; German teenagers nonchalantly smoke cigarettes, use marijuana and take Ecstasy, enticing 13-year-old title character to do the same, but he later realizes drugs can’t make him happy; and, teenage rebellion, teenager lies to father about sneaking out to parties that he’s too young to attend, teenage bullying, racism, and surly teenagers disrespect teachers, but father and teacher try to help title character deal with his personal problems and settle down though they seem to think boy is only going through a phase.

MORRIS FROM AMERICA is a coming-of-age drama about a 13-year-old African-American boy and his widowed father as they adjust to life in Germany after his mother’s death. MORRIS IN AMERICA is a touching portrait of father-son relationships, with a somewhat positive ending, but it has an extreme amount of foul language, strong sexual references and a sometimes nonchalant attitude toward teen drinking and drug use.

The story focuses mainly on 13-year-old African-American boy named Morris (Markees Christmas), who’s forced to move to Heidelburg, Germany by his father Curtis (Craig Robinson) after his mother dies. The story is a slice-of-life portrait of Morris dealing with early-teen rebelliousness at the same time his world has turned upside down, and the mysterious 15-year-old girl named Katrin (Lina Keller) who invites Morris into a world of partying and confusing relationships.

As Morris draws more distant from his dad and into the life of Katrin, he is faced with trying the illegal drugs Ecstasy and marijuana and to confront his first romantic/sexual crush. But even as he faces rebellion, which includes dreaming of becoming a famous gangster rapper, Morris has the concerned guidance of his father and his German-language teacher (Carla Juri) to help him.

There isn’t much of a complex plot to MORRIS FROM AMERICA, but it’s a deeply moving story that’s brought to vibrant life by the outstanding performances of its lead actors, Craig Robinson and Markees Christmas as the father and son. Sadly, the movie doesn’t take a very strong stand against Morris and his friends’ drug experimentation and sexual behavior, largely dealing with it as a “phase” Morris is going through in his life. Some may think this is more effective, because Morris does come to realize that the drugs can’t make him happy. So, it may seem refreshing to see a movie deal with a topic like this matter-of-factly rather than with forced drama.

Also, there are a couple moments where the father delivers a ringing condemnation of gangster rap and the dirty lyrics they entail, encouraging his son to focus on truly creative rappers. That tug between being dirty and clean is a major backdrop for the movie, with Morris becoming somewhat cleaner but not fully so.

Overall, MORRIS FROM AMERICA is a touching portrait of father-son relationships, a much-needed positive portrayal of an African-American father who truly cares for and is present in his son’s life. There are some nice scenes where the father and the boy’s German-language teacher each attempt to step in and help him amid his incredibly turbulent life as he learns to deal with living on another continent and cope with the death of his mother. The teacher advises Morris he doesn’t have to do bad things to impress his peers. At the end, Morris has learned to settle down and be less rebellious and more content with his father and classmates going forward.

However, MORRIS FROM AMERICA has an extreme amount of foul language, some sexual references and a nonchalant attitude toward teen drinking and drug use. So, it merits extreme caution and is only for adults.