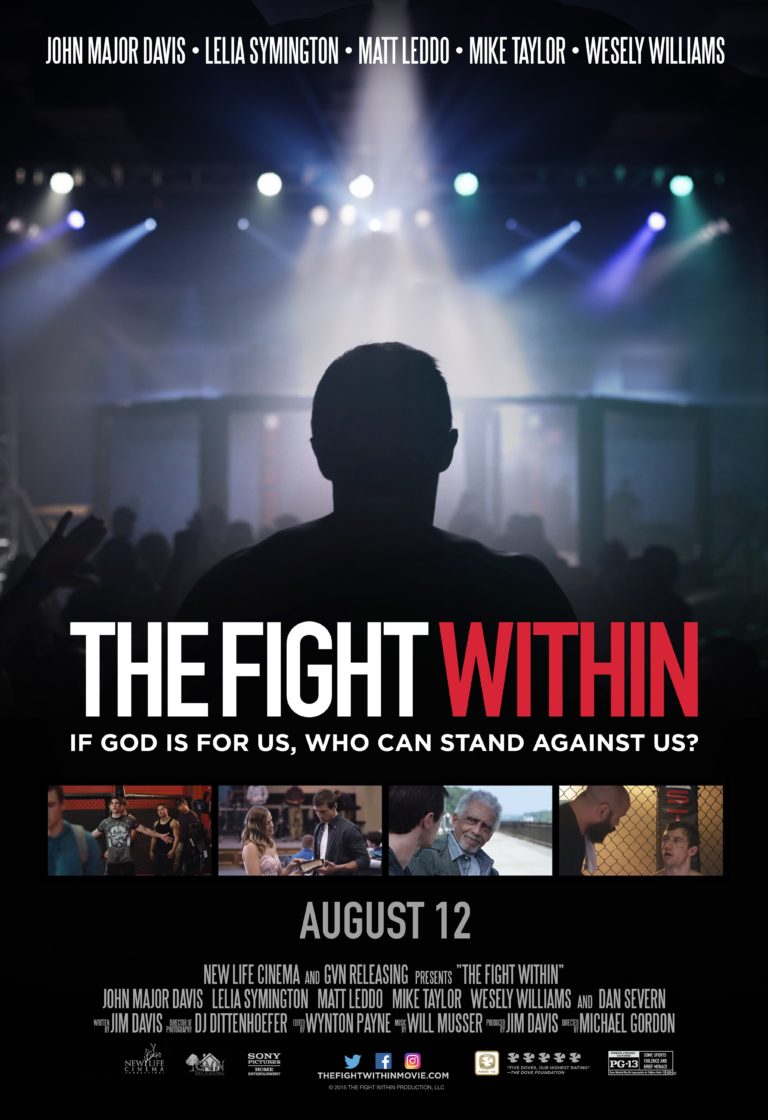 THE FIGHT WITHIN is a redemptive, inspiring, faith-friendly movie set in the world of Mixed Martial Arts fighting. Logan Chandler is a young reluctant fighter who’s retired from fighting because his father had a heart attack sparring with him a couple years ago. His father’s death haunts Logan. As the movie opens, however, Logan trains the would-be fighters at the gym owned by he and his brother, Morris. Eventually, Logan is drawn back into the ring when his rival threatens Logan’s Christian girlfriend, who brought him to Christ.

The story in THE FIGHT WITHIN slows down slightly after Logan accepts Jesus Christ while visiting his girlfriend’s church. However, it soon picks up again when the villain takes his goading of Logan one step too far. THE FIGHT WITHIN is well directed by Michael Gordon. It has a strong, explicit Christian worldview with positive faith and values. Gordon manages to extract appealing, compelling performances from his cast. The expository dialogue is also compelling. MOVIEGUIDE® still advises caution for older children because of some of the martial arts boxing violence in THE FIGHT WITHIN.

(CCC, BB, VV, M) Very strong Christian worldview includes positive evangelistic references to Jesus, the Bible, the Gospel, prayer, faith, forgiveness, helping others, happily sacrificing one’s pleasure for God, and going to church with strong moral content, but some people may be concerned about the message regarding professional fighting that could be seen as diluting the movie’s moral messaging and college-age Christian woman dates a skeptical college-age Non-Christian man, but he willingly listens to her explain her faith and soon comes to Christ himself; no foul language; light and strong MMA fighting includes sparring, man suffers heart attack briefly sparring with his son, boxing workouts, protagonist wrestles his brother when they have a disagreement, protagonist stops villain from punching a guy in the gym for no reason, villain threatens protagonist’s girlfriend, final bout between protagonist and villain in a cage match results in some bloody wounds, friends wrestle on some rubber rafts as they enjoy a visit to a lake; no sex, but some kissing; some upper male nudity, and a couple women in bikinis at a professional cage match event hold up cards for the crowd, but there are no close ups of their outfits; no alcohol; no smoking or drugs; and, some anger issues, and brothers have strong disagreement but reconcile.

THE FIGHT WITHIN is a redemptive, inspiring and Christian-friendly movie set in the world of Mixed Martial Arts fighting about a young reluctant fighter who’s retired for personal reasons but is drawn back into the ring when his rival threatens the fighter’s Christian girlfriend who brought him to Christ. THE FIGHT WITHIN is a compelling sports drama with strong, explicit Christian faith and values and no crude content, but MOVIEGUIDE® advises caution for older children because of some of the martial arts, boxing violence.

The movie opens with young Logan Chandler remembering a training session with his father. His father keeps pushing Logan until Logan complains. Logan tells his father he’s only pushing Logan because he himself can no longer fight like the champion he was. Logan’s father takes up the challenge and starts sparring with Logan, but at the first hard blow from Logan, his father suffers a heart attack and later dies at the hospital.

Guilt over his father’s death led Logan to decide not to become a professional fighter. However, he helps his brother, Mason, train other fighters at their father’s old gym that he left them. To make ends meet, Mason trains Haden, a professional fighter, who’s only loss was to Logan before Logan’s father died. Haden wants a rematch with Logan, but Logan refuses.

Meanwhile, Logan starts dating a Christian girl, Emma, who wants to go to Africa as a missionary. She and a homeless man whom Logan befriends introduce Logan to Jesus Christ. They patiently and compassionately answer Logan’s questions and address his doubt.

At the same time, Logan’s brother, Mason, gets a lucrative offer to stage a professional bout between Logan and Haden. However, Logan is still haunted by his father’s death, so he still won’t fight. Haden, however, decides to force the issue by goading Logan.

The story in THE FIGHT WITHIN slows down a bit after Logan accepts Jesus Christ, while visiting Emma’s church for the first time. However, it soon picks up again when Haden, the villain, takes his goading of Logan one step too far. The question is, can Logan’s brother give Logan enough training to stop Haden?

THE FIGHT WITHIN is well directed by Michael Gordon, who manages to extract appealing, compelling performances from his cast. The expository dialogue is also compelling, even when the Christian characters explain to Logan what it means to trust in God and follow His plan for your life.

There is no foul language or lewd content in THE FIGHT WITHIN, which has a very strong Christian worldview. Jesus, prayer, faith, and the Bible are all extolled. Thus, while some may be concerned about the movie’s acceptance of MMA cage matches, the Gospel is still clearly presented. Also, although Emma is at first unequally yoked to Logan as his girlfriend, Logan is still open-minded enough to listen attentively when Emma starts describing her Christian faith to him. Ultimately, the main message of THE FIGHT WITHIN seems to be that Christian faith, including Jesus and His Gospel, tames the troubled heart. It also gives peace and strength to Logan, the movie’s protagonist.

All that said, MOVIEGUIDE® still advises caution for older children because of some of the martial arts boxing violence.

Watch THE FIGHT WITHIN: