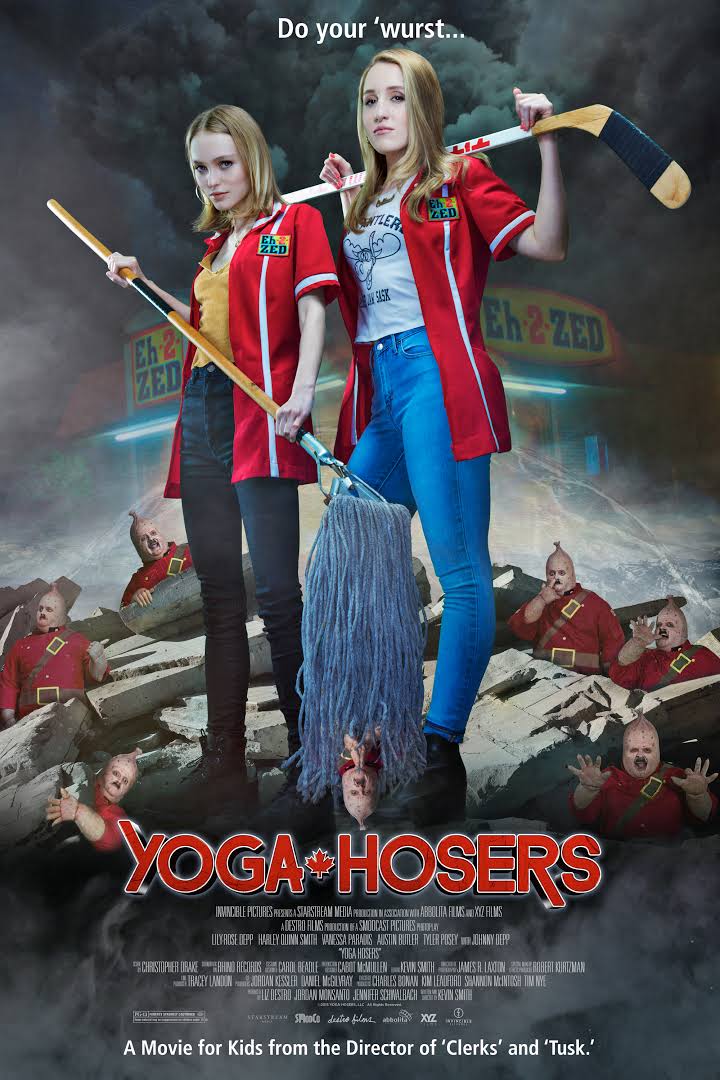 YOGA HOSERS is a horror comedy about two ditzy Canadian girls who must use their wacky yoga positions to defeat a mad scientist and his tiny, murderous Nazi clones. Both named Colleen, the two teenage girls take yoga classes and work at one of the girls’ father’s convenience store. A series of gruesome murders has occurred nearby, and the girls become suspects when two teenage boys show up as victims. However, a goofy French-Canadian detective believes something fishy is happening. Eventually, he and the girls must battle the mad scientist and his tiny, murderous Nazi clones, who were awakened early from their suspended animation crypts under the store.

YOGA HOSERS is meant to be a wacky spoof, so it’s not to be taken seriously. However, it’s very low budget. The low budget distracts from the comedy, which is hit or miss in the first place. Although there are some humorous jokes poking fun of yoga, the two heroines use yoga to dispatch the bad guys. That problem, plenty of foul language, and some lewd references and gory violence make YOGA HOSERS unacceptable.

(PaPa, FRFR, O, Ab, B, LLL, VVV, S, N, A, DD, MM) Strong pagan worldview in a comical context where two Canadian heroines use yoga and hockey sticks to kill the bad guys, which include two Satan-worshipping teenage serial killers and crazy Nazis (newsreel footage recounts Anti-Semitic Nazi movement in Canada before World War II), mitigated by some light moral elements, including girls sing Canadian anthem lyrics, “God keep our land glorious and free”; at least 25 obscenities, 12 strong profanities (heroines are repeatedly called “GD yoga hosers” by several people) and 10 light profanities (mostly OMG), plus brief toilet humor; brief gory violence such as tiny human clones made partly out of bratwurst smashed dead, hit with hockey sticks and one microwaved (sometimes the killing is implied), it’s implied the tiny clones wearing pointy German helmets kill people by entering their anal areas and gutting their bodies, fighting, mad scientist has made sculpture from the skin and bones of his recent victims, girls kill two teenage serial killers; some crude sexual references, including one to oral sex, and unmarried couple kiss in bedroom, but they’re interrupted by man’s daughter and her friend loudly singing a song in another bedroom to disrupt father; upper male nudity; alcohol use; a couple drug references but not promoted; and, teenage rebellion, teenage store clerks evade work by putting up deceitful signs so they can practice with their band in the back room, tension between teenage daughter and divorced/widowed father’s girlfriend.

YOGA HOSERS is a horror comedy by Kevin Smith, the filmmaker behind CLERKS and JERSEY GIRL, about two ditzy Canadian girls who must use their wacky yoga positions to defeat a mad scientist and his tiny, murderous Nazi clones. YOGA HOSERS has a few funny moments as a comical spoof, but the rest of it is just too silly, amateurish and offensive to generate any real love for its wacky shenanigans.

The two Colleens accept a party invitation from a hot senior at their high school, but Colleen C.’s dad, who owns the convenience store, wants to spend the weekend with his new girlfriend. So, the two girls are stuck running the store Friday night. So, they invite the high school hottie and his friend to come to the store and party. What they don’t know is that the two guys turn out to be serial killers.

The boys are a red herring, however. The two Colleens easily dispatch the two teen ghouls using their yoga moves, taught them by their goofy teacher, Yogi Bayer, who’s being sued by Warner Bros. for copyright infringement. The yoga moves include such silly poses as Disgruntled Customer and Pretentious Frog.

Once they dispatch the two wannabe serial killers, the girls are menaced by tiny Nazi clones created by a mad scientist, who’s been living in suspended animation under the store since World War II. The scientist and his clones were woken up early from their slumbers, before the clones had a chance to grow into human size. The scientist is actually a frustrated sculptor who now wants to use the clones to kill all art critics.

Can the two Colleens stop this Neo-Nazi menace?

YOGA HOSERS is meant to be a spoof, so it’s not to be taken seriously. However, it’s very low budget. The low budget distracts from the comedy, which is hit or miss in the first place. Although there are a lot of funny jokes poking fun of yoga, the fact remains that the two heroines use yoga to dispatch the bad guys. That, plenty of foul language, and some lewd references and gory violence make YOGA HOSERS unacceptable.