"Your Sins Shall Find You Out" 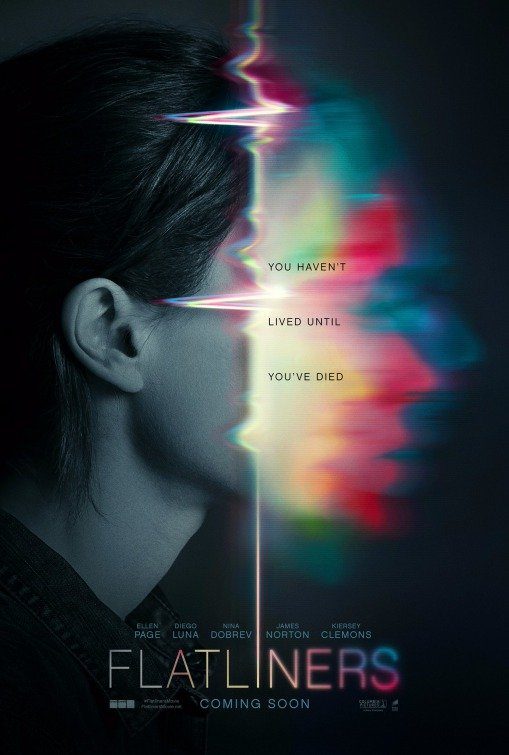 FLATLINERS is a 2017 sequel of the 1990 psychological horror movie that starred Kiefer Sutherland, Julia Roberts, and Kevin Bacon. This version stars lesser actors Ellen Page, Diego Luna and Nina Dobrev as medical students who are able to achieve greater brain function by stopping their heart, dying and being resuscitated, as well as Kiefer Sutherland reprising his role. The only problem is that once they come back to life, they are hunted down by a supernatural force seeking justice for sins the students committed.

FLATLINERS isn’t a great movie by any measure. The portion in which each of the medical students are being hunted down is more tedious and boring than it is scary. The lackluster quality of the movie is unfortunate, because the moral of the story is actually quite positive. One character rightly asks, “what if our sins are coming for us,” and then suggests that the thing that’s hunting them is “something demonic.” Amazingly, the solution in the end is actually repentance and forgiveness. That said, FLATLINERS has too much foul language and sexuality, so extreme caution is advised.

(BBB, CC, Ab, Pa, LL, VV, SS, N, AA, D) Strong biblical and Christian worldview stressing repentance, forgiveness of sins, and owning up to responsibility, character says “Thank God”, but character makes a blasphemous statement “I’m Jesus”, also characters exhibit pagan lawlessness when they feel on top of the world, but this is somewhat refuted by the movies final message; ten obscenities (including 1 f-word), eight profanities (including JC’s and GD’s), and an obscene gesture; moderate violence includes a women falling to her death off of a fire escape, people medically stopping their hearts and then coming back to life, a shot of a man having surgery performed on him, scary nightmarish images, a man is stabbed in the hand with a knife, and intense car crash is shown, with a little girl inside who drowns; brief depicted sex with movements, but no explicit nudity, and implied sex where characters are shown taking off their clothes, and then a scene afterwards of them lying on the couch; upper male nudity, women in their underwear, the back of a women during sex, images of a teenager’s sexts; moderate drinking, some drunkenness; no smoking, mention of doing LSD; and, no other immoral content.

FLATLINERS is a 2017 sequel of the 1990 psychological horror movie that starred Kiefer Sutherland, Julia Roberts and Kevin Bacon. This version stars lesser actors Ellen Page, Diego Luna and Nina Dobrev, as well as Kiefer Sutherland reprising his role from the first movie.

In the movie, Dr. Courtney Holmes (Ellen Page) is wrecked by the death of her little sister that was caused in a car accident because Courtney was looking at a text. Even though nine years has passed since the accident, Courtney spends her time researching life after death. More specifically, she researches what activity occurs inside of our brains after death.

Courtney theorizes that if she stops her heart and records her brain’s activity, and then is resuscitated, she could break new scientific ground in the field. The experiment is literally a suicide mission. To do this however, she’ll need some help. Courtney begins by enlisting fellow students Sophia and Jamie, but when they have trouble resuscitating her, those two students call for the help of Ray (Diego Luna) and Marlo (Nina Dobrev) to help bring Courtney back to life. While dead, Courtney sees a myriad of things she can’t explain, including her dead sister, but then is brought back.

Some of the medical students, like Jamie and Marlo are fascinated by what Courtney experienced, others like Ray believe it to be foolish and way too dangerous. The next day, Courtney’s energy and intellect shoot through the roof, impressing her colleagues. One by one, each of the other students want to flatline and get what Courtney got, all of them except for Ray.

However, Courtney begins seeing visions and nightmares relating to her sister’s death. Others are haunted by past sins. Marlo is tormented by the fact that she accidentally gave a patient the wrong medication, leading to his death. Sophia feels guilty about leaking naked photos of her high school academic competition to the whole school. And, Jamie is reminded of a girl he impregnated when he was younger and bailed on her when she went to get an abortion. The hauntings get so bad, that Courtney actually dies. The others must figure out what to do before they’re next.

FLATLINERS isn’t a great movie by any measure. The portion in which each of the medical students are being hunted down is more tedious and boring than it is scary. The acting is mediocre, and the overall visual style is unappealing and grim, not unlike the Director, Niels Arden Oplev’s 2013 movie DEAD MAN DOWN.

The lackluster quality of the movie is unfortunate, because the moral of the story is actually quite positive. One character rightly asks, “what if our sins are coming for us,” and then suggests that the thing that’s hunting them is “something demonic.”

While a bit of a spoiler for anyone that hasn’t seen either movie, the solution for the medical students who are worried for their life is to make amends for their sins and seek repentance and forgiveness. Positively, when James goes to make amends with the woman he thought got an abortion, he learns that she went through with the pregnancy and now has a son. Though it’s not explicitly mentioned, the obvious conclusion is that we all are sinners and need spiritual forgiveness, or else our sins truly will be the death of us.

FLATLINERS has too much foul language and sexuality, so extreme caution is advised.