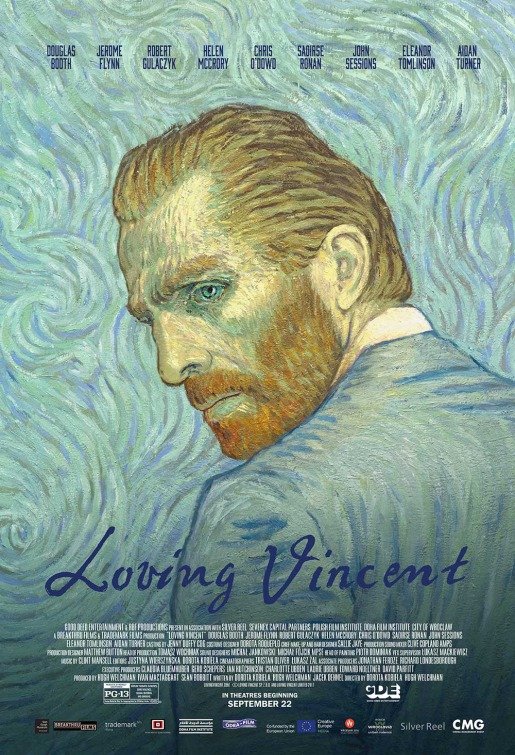 LOVING VINCENT is an incredible hand-painted movie about the last days of painter Vincent Van Gogh. The story takes place a year after Vincent died at 37-years-old in 1890. In Holland, Armand, the son of a postmaster friend of Vincent, is given a letter from the late Vincent to Vincent’s brother, Theo. Armand discovers that Theo died days after Vincent, so Armand takes the letter to Vincent’s doctor in the village where he died. Another doctor says Vincent couldn’t have shot himself, so Armand wants to discover who killed Van Gogh. Everyone tells Armand a good alibi, and everyone seems to tell the truth, but their stories disagree with one another. Each person, however, reveals something about Van Gogh.

LOVING VINCENT takes time to adjust to a movie in high art. Once you do, it becomes a fascinating revelation of Vincent Van Gogh. Besides being an interesting whodunit, this Polish production finds renowned actors who look like the characters in Van Gogh’s paintings. At any rate, LOVING VINCENT is fascinating. Although not a big audience movie, it’s a movie worth watching.

(BBB, C, Ab, L, VV, S, AA, D, M) Very strong moral worldview about doing the right thing, finding out the truth, honoring relationships, respecting bequests, with slightly positive Christian content as well as a negative Christian character; one obscenity; strong violence includes man is shot, fistfights, village idiot tripped, lots of descriptions of a shooting, woman opens handkerchief and finds an ear that’s been given to her, man covered with blood, once for cutting off his ear and another time for getting shot in stomach; no sex but prostitutes clothed in very restrained corsets sitting around a parlor, a mention of syphilis and hints of possible sexual attraction; no nudity; lots of alcohol use, although after getting drunk a few times the main character refuses any more drinks; constant men and women smoking cigarettes and pipes; and, so-called village idiot surprises and stalks the protagonist several times, village young men harass Van Gogh, churchlady/housekeeper has nothing to say good about anybody, and as the whodunit progresses, it’s clear several people, if not everyone, is lying.

LOVING VINCENT is an incredible, hand-painted movie about painter Vincent Van Gogh. The actors who became the objects of the paintings have a very strong resemblance to the characters in Van Gogh’s famous paintings. The painted characters are sometimes in color and sometimes in black and white, all painted in the style of Vincent Van Gogh. However, this isn’t just an artistic movie, although it’s very artistic. It is a whodunit to find out who shot Vincent Van Gogh, himself or someone else?

The story takes place a year after Vincent died at 37-years-old on July 29, 1890 in Auvers-sur-Oise, France. In Zundert, Netherlands, Armand, the son of a postmaster, who was a close friend of Vincent’s, is given by his father a letter from Vincent, written before he died, to Vincent’s brother, Theo.

Armand, at first, is a hot head. The movie first shows Armand beating up on a soldier and then fighting in a bar. It is only after his father tells him the importance of the letter to Theo that Armand agrees to keep his word to deliver it. Armand’s father says, “What if you had died, and, before you died, you had written me a letter. Wouldn’t you want me to get it.”

Armand travels to Paris to find Theo, only to discover Theo died six months after Vincent did. Armand, after interviewing several people, decides to go to a small French village called Auvers-sur-Oise to give the letter to the doctor who treated Van Gogh for his melancholy, which today probably would have been called manic depressive.

When he gets to the doctor’s village, he meets the doctor’s daughter who clearly liked Vincent Van Gogh, but who lies to him about Vincent. Then, he meets the housekeeper, who tells him to go away and says Van Gogh was a very evil man. The doctor’s out of town, so Armand rents the room where Vincent died in the little hotel bar being kept by a lovely woman who clearly was also interested in Van Gogh.

Armand tries to find out why Van Gogh shot himself, but another doctor tells him it would have been impossible for Van Gogh to shoot himself at that angle. When people shoot themselves, they shoot themselves in the head, the mouth, or the heart, not in the lower abdomen. Also, from the angle of the shot and the force of entry of the bullet, Van Gogh must have pulled the trigger with his big toe.

Now, Armand wants to discover who killed Van Gogh, but everyone has a good alibi, and everyone seems to tell the truth, but the truths disagree with one another. Each person, however, reveals something about Van Gogh. They talk about Van Gogh’s short-lived friendship with Gaugin and other famous painters of the period. Vincent Van Gogh only painted for a few years (the movie says eight), but he painted 860 oil paintings. The doctor treating Van Gogh envied his art because he always wanted to be an artist and spent his nights copying Van Gogh’s paintings. When the doctor died, he gave the paintings to a French museum, and the museum had to decide which were Van Gogh’s and which were the doctor’s.

LOVING VINCENT takes a moment to get used to as a movie in high art. Once you get used to it, it becomes a fascinating revelation of Vincent Van Gogh, so much so that this review could go on and on. Besides being an interesting whodunit, this Polish production finds renowned actors who look like the characters in Van Gogh’s paintings.

By the way, the movie does mention that Van Gogh studied for the priesthood in the Reformed Church and failed. Then, he studied to be a missionary and failed. His father was a devout man of God, and Van Gogh clearly wanted to follow in his footsteps. However, the movie doesn’t show his theological interest in any meaningful way and doesn’t show Van Gogh’s faith in Jesus Christ. The one overtly Christian character, the housekeeper, is a mean-spirited gossip and slanderer, which is very sad.

At any rate, LOVING VINCENT is fascinating, with a strong moral worldview about doing the right thing, finding out the truth, honoring relationships, and respecting bequests. Although not a big audience movie, it’s a move well worth watching.