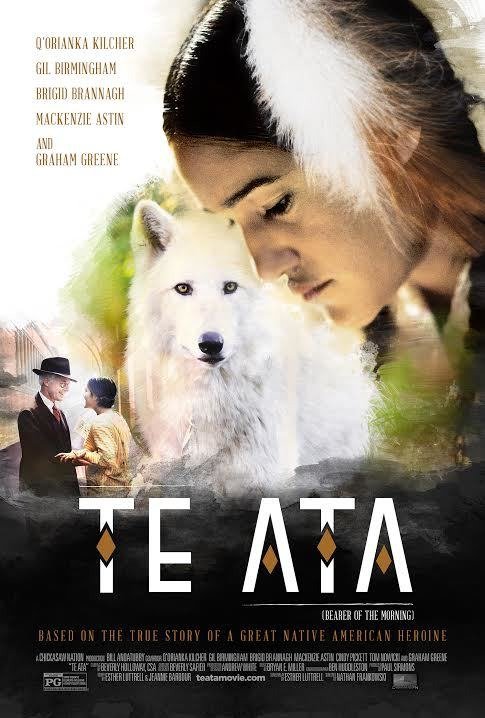 TE ATA is an extremely well-made, eye-opening, heartrending, inspiring, beautiful true story about a Chickasaw Indian woman named Mary Thompson Fisher. As a little girl, Mary displayed an aptitude for being an imaginative storyteller. Encouraged to go to the Carnegie School of the Arts, the best in the nation, Mary tries goes to Broadway and takes the stage name of Te Ata, which means Bearer of the Morning. Meanwhile, because of the government’s ban on all things Indian, Mary performs for women’s clubs and garden groups and eventually meets Eleanor Roosevelt. Even so, how can she continue in the face of the government opposition to all of Indian culture?

TE ATA is an extremely well-made movie on a low budget. The character arcs are terrific. The jeopardy is intense. TE ATA is full of heartrending elements. Much of the movie is very Christian. This is a Christian tribe. There are hymns, churches and affirmations of faith and prayer. There are also some Native American stories, but most can be seen as prefiguring the Christian Gospel. TE ATA is a must-see movie.

(BBB, CC, Pa, FR, PC, M) Very strong moral worldview with a lot of Christian content, including churches, hymns, references to God as the Creator, as well as Native American stories that seem to support a Christian theology, plus some other stories that are more pagan and superstitious, and a plot device of a guardian white dog and an Indian journey pole, and some minor politically correct content; no obscenities, no profanities, but some derogatory remarks about Native Americans and derogative remarks about European American; tremendous jeopardy and threats of violence with one shooting off screen when an Indian elder whom the title character had observed in a shouting match with a property owner who told him to keep off his property, title character’s father becomes bedridden after the federal government impounds the Indian items he’s selling in his store; no sex scenes or sexual immorality, and very chaste love affair between title character and a professor, who get married, with only a couple of kisses; no nudity but one scene has title character trying out for a Broadway part where she’s supposed to wear a skimpy Indian costume, but she refuses; no alcohol; no smoking or drugs; and, racism, traditionalism to the extreme and unfavorable portraits of looking for a job on Broadway.

TE ATA is an extremely well-made, eye-opening, heartrending, inspiring, beautiful true story about a Chickasaw Indian woman named Mary Thompson Fisher, who became the storyteller to the world about the traditions of her tribe and other Native American tribes.

Born in 1895 to a Chickasaw father named TB and a German mother named Bertie, who have a number of children, little Mary is an imaginative storyteller even as a child. Her uncle, Doug, is the governor of the Chickasaw people who live in Indian Territory before Oklahoma became a state. They were forced to move to Indian Territory from the American South during the Trail of Tears under the presidency of Andrew Jackson.

Uncle Doug, played wonderfully by Graham Greene, goes to Washington to ask for the Chickasaw money that the government’s holding for the tribe, so that they can improve education. One of the representatives in Washington is very Anti Native American and causes a law to be passed forbidding Native American customs, dances, artifacts, and other cultural items.

When Mary grows up, she wants to tell the wonderful stories she heard as a child in song and dance. She becomes the first Indian student at the Oklahoma College for Women and is shunned by the white students. However, one teacher recognizes her theatrical gifts and takes her into the theater department, where she empowers Mary and inspires her to go to the Carnegie School of the Arts, the best in the nation, after she graduates. Mary’s teacher also tells her that everybody tries to perform a scene from Shakespeare, but she needs to do her own stories.

Carnegie rejects her, but Mary travels up to Carnegie and insists on performing. Her performance amazes all the students and faculty and causes them to accept her.

After Carnegie, Mary goes to Broadway and takes the stage name of Te Ata, which means Bearer of the Morning. After a year of pounding the pavement, she gets a part, but she’s disappointed that she takes no pleasure in it.

Meanwhile, because of the government’s ban on all things Indian, Mary performs for women’s clubs and garden groups and eventually meets Eleanor Roosevelt. She also meets an astronomy professor, Dr. Clyde Fisher, who’s extremely famous and built the Natural History Museum’s planetarium. In a very loving and powerful way, they fall in love.

Clyde asks Mary to marry him. She goes back to her father, but her father is bedridden because the government seized all the native artifacts he sold in his store. He tells her that he opposed her going to college, opposed her going to Carnegie and Broadway, and wants her to return and settle down on the reservation like a nice girl.

When Dr. Fisher shows up, however, he helps the father to understand Mary has a gift, and Mary performs for her Chickasaw Nation. Even so, how can she continue in the face of the government opposition to all of Indian culture?

TE ATA is an extremely well-made movie on a low budget, so much so that prominent reviewers have proclaimed it’s a $2 million movie that looks like a $50 million Hollywood feature. Of course, the key to that is great storytelling. The character arcs are terrific, the jeopardy is intense, and, although the movie has a slight politically correct element, it faithfully represents history and shows the injustice some European Americans inflicted on Native Americans and their culture. Even so, there are very positive figures, such as Eleanor Roosevelt (who had her own prejudices in real life) and Dr. Fisher, as well as many of Mary’s teachers and friends.

TE ATA is full of heartrending elements. Much of the movie is very Christian. This is a Christian tribe. There are hymns, churches and affirmations of faith and prayer. There are also Native American stories, but the vast majority of these stories can be seen as prefiguring the Christian Gospel. As C.S. Lewis said, he came to Christ by looking at ancient myths and seeing the Christian elements in them. The Creation story Mary tells is a direct allegory.

As Te Ata, she also tells the story of a white wolf who leads the Chickasaw people. This wolf appeared to her as a child and appears to her in the movie at critical moments. It is an excellent plot device and can be seen as ambiguous in the interpretation of what it means.

In other words, this is a very moral movie without onscreen sex, violence or obscenity, with a tremendous respect for Christianity and a historical recognition of the difficulties Native Americans faced from the federal government and others.

TE ATA is a must-see movie. MOVIEGUIDE® recommends it highly. Since it had a very small release, please look for it on DVD and streaming services. By the way, many Chickasaw Indians played in the movie. It is amazing that a local production could be so well crafted.