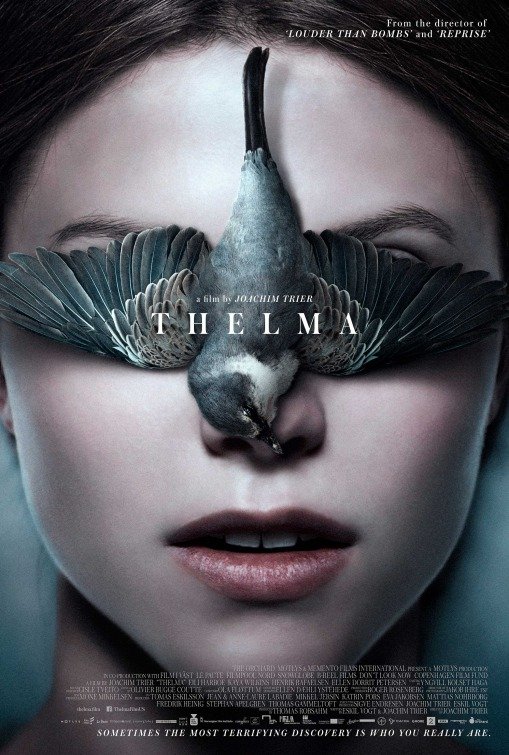 THELMA is an atmospheric horror movie from Norway. A lonely, timid college freshman with telekinetic powers falls under the spell of a beautiful co-ed. As a young child, Thelma had unintentionally killed her baby brother, but the strict Catholic father spared her life. However, as she begins an affair with another young woman, she starts to lose her grip on her powers, if not her sanity. As she’s been taught by her parents, Thelma prays to Jesus for deliverance, but to no avail. The movie leaves things in doubt regarding its title character until the very end, when Thelma chooses to do evil.

THELMA is an arty foreign language movie. It moves slowly and leaves things up to viewers to figure out what’s happening. It becomes clear that the title character represents a danger to herself and other people. Eventually, however, she’s seduced to use her powers for selfish evil ends. Ultimately, THELMA is a demonic, humanist movie attacking Christianity and promoting homosexuality and lawlessness. THELMA also has a strong feminist subtext attacking males, with some foul language, lewd scenes and disturbing violence.

(HHH, HoHoHo, AbAbAb, CC, FeFeFe, L, VV, SS, NN AA, DD, M) Very strong humanist, homosexual worldview promoting lesbianism and attacking Christianity, seeing it as repressive, some overt prayers sincerely recited, plus a very strong feminist subtext that eliminates males by essentially murdering them when they bother the female lead; disturbing violence includes father considers shooting his daughter in the head with a rifle while they’re out hunting, woman has several epileptic type seizures, man magically bursts into flames in a boat, man rises from the water and his head bursts into flames again, snake seems to be going into woman’s mouth during a fantasy sequence, girl wishes her baby brother under the ice in a lake, picture window bursts into pieces, and young woman suddenly vanishes, implied attempted suicide; two young women kiss passionately in a couple scenes, they sleep together in a bed (nothing else implied other than touching hair, one of the women imagines the other woman fondling her body and reaching into her underpants, but then it turns out to be imagined self-abuse, promotion of homosexual lust; upper female nudity of young woman in bathtub, upper male nudity in one or two scenes, woman in bra and panties; alcohol use and drunkenness; smoking tobacco and people fool young woman into thinking she’s smoking marijuana and she has a self-induced hallucination; and, practical joke, brief talk about religious repression, mockery of radical Young Earth position that the universe is only 6000 years old.

THELMA is an atmospheric horror movie from Norway about a college student with special powers who’s seduced by Satanic forces, takes a lesbian lover and murders her Catholic father, despite her prayers to Jesus for deliverance. THELMA leaves things in doubt regarding its title character until the very end, but in the movie’s abhorrent ending, Thelma kills her overly strict father and goes off with her lesbian lover.

The movie opens with a scene of Thelma as a young girl on a hunting trip. Her father thinks about shooting Thelma in the head, but decides against it.

Later, when Thelma is a freshman in college, flashbacks show that, as a child, Thelma had the power to move people and objects she didn’t want to other places. Jealous of her baby brother, her mental powers move the crying baby under the couch. Then, while she’s asleep, she moves the baby from his bathtub to under the ice in the nearby lake, where he dies. Thelma’s mother became so distraught about this unconscious murder that she tries to jump off a bridge and becomes a cripple.

In college, Thelma starts having seizures whenever she’s around another pretty girl, named Anja. Anja seduces Thelma into starting a lesbian affair. Thelma at first rejects Anja’s overtures but quickly succumbs to them. She also has a hallucination about Anja touching her body while a snake crawls into Thelma’s mouth. The bizarre behavior continues as [SPOILERS] Thelma moves back home and uses her powers to kill her father and heal her crippled mother.

THELMA is an arty foreign language movie. It moves slowly and sometimes leaves things up to viewers to figure out what’s happening. It becomes clear that the title character represents a danger to herself and other people. Eventually, however, she’s seduced to use her powers for evil ends.

It also has a strong feminist subtext attacking males.