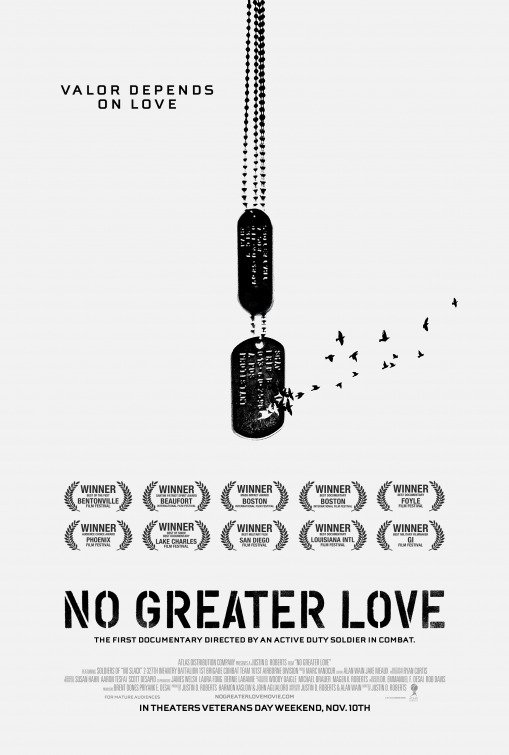 NO GREATER LOVE is a Christian, patriotic documentary about American soldiers in Afghanistan, which focuses on the “No Slack” battalion of the US Army 101st Airborne Division. Told through the eyes of the battalion’s Christian chaplain, it includes what happened after coming home. Footage shot by U.S. Army Chaplain Justin Roberts, including actual battle footage, is interspersed with commentary and interviews with the soldiers. The soldiers discuss how events in Afghanistan affected them, and the physical, mental and emotional issues they and their compatriots faced in coming home.

NO GREATER LOVE is one of the most powerful, best documentaries ever made. It’s thoroughly captivating. The footage from the battlefield is intense, and the interviews with the soldiers are incredibly informative. They are also often stirring and heartbreaking, especially when the soldiers talk about losing one or more of their own brothers in arms. NO GREATER LOVE contains many heartbreaking moments. However, it also has great moments of victory. Not the least of these victories is the way in which the surviving soldiers come together to help one another, demonstrating real Christian love.

(CCC, BBB, PPP, LL, VV, D, M) Very strong Christian, moral, patriotic worldview about American veterans fighting in the toughest area of Afghanistan and coming home, after their tours of duty extols America, families, fighting evil, and helping one another and includes prayer, references to church, references to John 15:13, positive references to God, and several references to miracles on the battlefield; 12 obscenities (six “f” words), one GD obscenity in the heat of battle, and four light profanities; sometimes strong, intense violence includes lots of gunfire, American soldiers shoot back at enemy, an explosion occurs, brief references to a rocket propelled grenade cutting a man in half, and another one hitting someone in the head, brief images of a slightly bloody post-op head wound, discussion about suicide, man’s scarred bare back is shown, obscured images of wounded soldiers, discussion of other combat injuries and deaths; no sex; no nudity; no alcohol use; a soldier smokes in one scene; and, talk about PTSD and traumatic incidents might disturb some viewers.

NO GREATER LOVE is a Christian, patriotic documentary about American soldiers in Afghanistan, which focuses on the “No Slack” battalion of the US Army 101st Airborne Division, including what happened to them after coming home. Told through the eyes of the battalion’s Christian chaplain, with interviews of the surviving soldiers themselves, NO GREATER LOVE is a dramatic, compelling, redemptive documentary that makes a stirring plea for citizens to get involved with helping veterans help one another.

Actual footage shot by U.S. Army Chaplain Justin Roberts, including some actual battle footages, is interspersed with commentary and interviews with the soldiers. The soldiers discuss how events in Afghanistan affected them, and the physical, mental and emotional issues they and their brothers in arms faced in coming home.

In a brief opening, Pastor Roberts gathers some of the soldiers and their families in a church, to give the first sermon he’s given since a memorial service for several slain soldiers. Chaplain Roberts tells the men women and children that his sermon will be more like a confession. The pastor’s narration then takes over as he and interviews he did with other soldiers tell how the “No Slack” battalion, which fought in the Battle of the Bulge in World War II, were summoned to deploy from Iraq to the toughest province in Afghanistan, Kandahar, in May 2010. Footage shot by Chaplain Roberts from the battlefield shows the soldier engaging the Taliban in one Kandahar valley. After coming under fire for days, the battalion decides to take the offensive against the Taliban fighters and secure the valley. In doing so, they’re up against a formidable Taliban leader, nicknamed QZR, who had fought the Russians in the 1980s.

The battalion succeeds in taking the valley, but they lose a couple of their brothers and several are wounded. One of the soldiers, Captain Mott, has a serious skull wound, among other wounds, but, like other soldiers, works to return to Afghanistan to fight with his brothers in arms. Mott is so beloved and respected by the troops that he’s put in charge of another platoon ion his return.

This time, the men are ordered to lay siege to another valley, the one where QZR’s hometown is located. The valley is also the headquarters of the local area’s Taliban forces, the place through which men and arms flow. No one, not even the Russians, has dared to invade that valley.

NO GREATER LOVE is one of the most powerful, best documentaries ever made. MOVIEGUIDE® has seen several documentaries about the war in Iraq and Afghanistan, but this is the best one so far. The interviews with the soldiers are incredibly informative. They are also often stirring and heartbreaking, especially when the soldiers talk about losing one or more of their own brothers in arms. In one scene, an army medic talks about a dying soldier deliriously asking him, “Where’s my chariot?,” either referring to a medical helicopter on the way or the chariot that’s supposed to carry him to Heaven.

One of the most incredible incidents involves a large bomb dropped by the U.S. Air Force during Operation Strong Eagle I. The bomb lands within 20 feet of some of the American troops. The ground is covered in smoke, and some of the U.S. troops have to bat out fire on their uniforms from the bombs. Miraculously, no one is killed, and the men call the incident a true miracle. Someone was watching over them that day, one soldier remarks after saying he’s not particularly religious.

Later interviews with the soldiers, and some other soldiers who took part in Operation Strong Eagle 1 and III, find the soldiers discussing the difficulties of adjusting to civilian life when their tours of duty end. These interviews are no less harrowing or heartbreaking, even though the battles are more internal rather than external. Interviews with a couple Gold Star widows and a Gold Star mother about their lost husbands and lost son are extremely heartbreaking, but also incredibly inspiring.

Pastor Roberts does a brilliant job putting this movie together. He also does a great job filming the battlefield and interviewing the soldiers afterwards. The soldiers give many insights into their experiences, insights you won’t get anywhere else than from this movie. A note at the beginning of the movie says that, in 2009, the No Slack battalion had the highest rate of suicide in the U.S. military, before they were even deployed in the toughest province in Afghanistan.

NO GREATER LOVE contains many heartbreaking moments. However, it also has great moments of victory. Not the least of these victories is the way in which the surviving soldiers come together to help one another as they work to overcome the “residue of war” that still impacts their lives, years after their combat “tours.” The motto for this victory, and the title for this movie, comes from John 15:13, where Jesus says, “No one has greater love than this, that he would lay down his life for his friends.”

Strong or extreme caution is advised for several “f” words and a GD that occur during the movie. NO GREATER LOVE also has some intense battle scenes and several post-op images of slightly bloody wounds.