"Provocative and Redemptive, but Excessive" 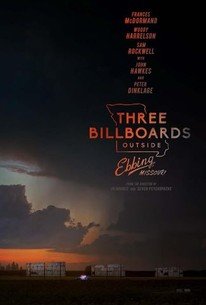 THREE BILLBOARDS OUTSIDE EBBING, MISSOURI is a darkly comic crime drama. An embittered middle-aged mother named Mildred notices a trio of decrepit billboards on the outskirts of her hometown of Ebbing. Her teenage daughter was brutally raped and murdered seven months before, but the sheriff and his underlings have proven unable to solve the sordid crime. Mildred decides to rent the billboards to display a series of confrontational messages aimed to shame the sheriff into solving the crime. However, a series of unexpected consequences occurs as the townspeople react badly to the disturbing signs. A series of shocking twists occurs.

THREE BILLBOARDS OUTSIDE EBBING, MISSOURI takes an extremely dark and sad premise and turns it into a powerful exploration of justice, forgiveness and second chances. It’s a compelling, thought-provoking movie about complex issues. However, has a heavy dose of strong obscenities, profanities and other crude language as well as some graphic, disturbing violence, including the suicide of a terminal cancer victim. Finally, an example of vigilante justice at the end pushes THREE BILLBOARDS OUTSIDE EBBING, MISSOURI over the boundaries of acceptability.

(PaPaPa, BB, PP, HH, AbAb, C, Ho, LLL, VVV, S, AA, MMM) Very strong mixed pagan worldview, with some strong moral elements and a positive view of an American police sheriff in a story about a woman seeking justice for the heinous rape and murder of her daughter both for vengeance but also to prevent her attacker from striking again, woman learns to be more accepting and forgiving of others, and movie depicts sheriff as a noble law enforcement figure with a loving marriage and as a doting father, mixed with some negative and immoral elements such as an immoral ending and female protagonist delivers a vicious rebuke to a Catholic priest who tries to talk her into taking down controversial billboards (she scolds him that he has no right to say anything because the covered up for many pedophile priests), but elsewhere the movie features numerous moments of forgiveness and grace extended between antagonistic characters, and some powerful moral growth on the part of key characters, plus some homosexual references; at least 175 obscenities (including more than 100 “f” words) and dozens of profanities (including many GDs or immoral uses of Jesus Christ’s name, several uses of the “n” word, and four uses of homosexual slurs (the other “f” word); very strong and strong violence includes man commits suicide by gun (with a bloody covering shown and blood around his head after the fact; he killed himself after giving his wife and children “the perfect day” to remember him because he has severe terminal cancer and is afraid that wasting away over months would be more destructive for them), man threatens woman and grabs her by the throat, man holds knife to another man’s throat to stop him from choking a woman, woman drills through a thumb nail with a dentist's drill and produces blood and anguished screams, character beats people with the butt of his gun, a corrupt policeman throws a man through a glass window from the second floor and then punches and kicks him hard out on the street, man sets billboards on fire, woman gets revenge by hurling Molotov cocktails at the police station to get revenge by burning it down, man inside jumps through the fire and winds up hospitalized with burns; there is a bar fight with scratching and punching and bleeding, and a few graphic references to the rape of a woman who was then murdered; strong sexual talk includes graphic references to the rape of a woman, a few crude homosexual references, and a scene where a happily married couple are implied to sneak off from their young children to have sex and briefly mention it after the fact; no nudity; frequent social drinking of alcohol occurs throughout the movie (including characters share beers together and have wine at dinner), with some depictions of drunkenness (including a reference to driving drunk, reference to a hangover, and a reference to having a “drinking problem”); frequent cigarette smoking and some references to marijuana smoking; and, characters exhibit bitter attitudes and harbor grudges throughout much of the movie (although some key characters have major redemptive shifts) woman wants justice for her daughter’s rape and murder but goes outside the legal system and engages in a battle against the local police when they can’t seem to solve the case, one man sneers and mocks a mother about the brutal way in which her daughter died and expresses a desire to have committed the vicious crime, and ending implies an act of vigilante justice against an evil-seeming person, who may or may not have something to do with the rape and murder of the female protagonist’s daughter.

THREE BILLBOARDS OUTSIDE EBBING, MISSOURI is a darkly comic crime movie about a mother’s quest to find the man who raped and murdered her daughter, taking the law into her own hands after concluding that the police are ineffective. THREE BILLBOARDS OUTSIDE EBBING, MISSOURI is a stunning, masterful movie about issues of justice, the ethics of vigilantism and issues of vengeance and forgiveness that will resonate with viewers, but is sadly clouded by heavy doses of obscenities, profanities and other crude language throughout, very strong violence, and an ending with moral problems that are ultimately unacceptable.

The movie opens on an embittered middle-aged mother named Mildred (Frances McDormand), as she notices a trio of decrepit billboards on the outskirts of her hometown of Ebbing, Missouri. Her teenage daughter was brutally raped and murdered seven months before, but the sheriff (Woody Harrelson) and his underlings have proven unable to solve the sordid crime.

Mildred decides to rent the billboards to display a series of confrontational messages aimed to shame the sheriff into finally solving the crime. However, a series of unexpected consequences occurs as the townspeople react badly to the disturbing signs, and a series of shocking twists occurs.

Along the way, Mildred has angry encounters with a local priest, who chides her to take down the billboards and move on with her life. Her campaign for justice also leads to a complicated set of interactions with the sheriff that ultimately lead to forgiveness and emotional growth for her but shocking results for him. The most intriguing relationship is between Mildred and a violent, racist cop (Sam Rockwell), who has to find a way to redeem himself after he goes on a rampage and loses his job.

Throughout the movie, Mildred also encounters a colorful array of characters that make this movie seem like a lost classic from the Coen Brothers, even though it comes from Martin McDonagh, who earned an Oscar nomination for Best Screenplay on his 2008 movie IN BRUGES. He specializes in movies that deal with moral conflicts centered around bursts of intense violence, but as unsettling as the violence depicted can be, it’s worth noting he’s one of the few filmmakers who sometimes actually shows the impact of violence in all its ugly reality.

THREE BILLBOARDS takes an extremely dark, sad situation, a mother seeking justice after an unimaginable loss, and turns it into a powerful exploration of justice, forgiveness and second chances. For example, Mildred learns to be forgiving towards the sheriff she held in contempt. Also, the movie depicts the sheriff as a noble law enforcement figure and portrays him as a doting father in a loving marriage. Sadly, a scene where she delivers a stinging rebuke to a Catholic priest, who’s criticizing her billboard campaign seems to indicate a strongly anti-Christian tone, though THREE BILLBOARDS has some really powerful messages of redemption, at least in a moral sense. The movie also has a heavy dose of strong obscenities, profanities and other crude language as well as some graphic, disturbing violence, including the suicide of a terminal cancer victim. Finally, an example of vigilante justice at the end pushes THREE BILLBOARDS over the edge of acceptability. It is, however, a compelling, thought-provoking movie about morally complex issues that will foster some intense discussions.