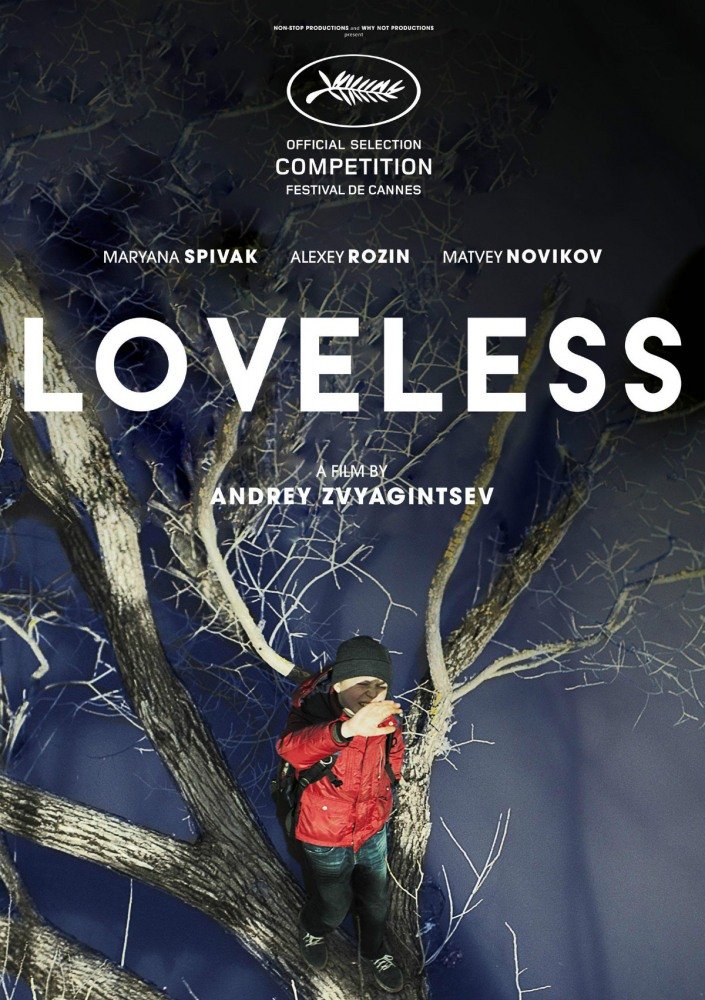 LOVELESS is a depressing Russian drama. It follows an adulterous couple trying to decide what to do with their 12-year-old son when they divorce. Overhearing they plan to send him to a children’s home and feeling completely unwanted and alone, their son decides to leave the next day and not return. Eager to just leave all their mistakes behind, the couple is now forced to confront their regrets and search for this child they never really wanted in the first place.

LOVELESS takes the Romantic position that modern society dehumanizes people, warping their ideas of love and creating social and psychological chaos. Its Romantic, rather hopeless worldview shows that a strong hedonistic paganism dominates the main characters, who pursue their own sexual and worldly desires above all else, including their own son. No moral compass guides anyone except for a community volunteer who tries to help the parents locate their son. However, the movie briefly suggests no one can blame anyone else but themselves for their mistakes and decisions. Though well crafted, LOVELESS also contains a high amount of questionable content.

(RoRo, PaPaPa, B, C, Ab, LL, SS, NNN, A, D, MMM) Strong Romantic and hopeless worldview contends modern society has dehumanized people and caused chaos as well as distorted love and family bonds where very strong hedonistic paganism also dominates as main characters pursue their own sexual and worldly desires above all else, including their own family, no moral compass guiding anyone in the movie besides the coordinator, who tries to help parents locate their son, parents have very little regret or remorse regarding the way they treated their son and ended up driving him to run away, both parents are in relationships with other people while they are still married to each other, the father doesn’t want to divorce because it could jeopardize his job as his boss is a very strict Christian who doesn’t allow divorce within the company, but the boss is portrayed as the bad guy keeping the family from happiness, though the parents seem to realize they have no one but themselves to blame; 23 obscenities (including 12 “f” words), plus woman shown using the bathroom; very strong sexual content includes two pretty graphic sex scenes involving each parent with their illicit lover; full frontal female nudity, upper female nudity, upper and rear male nudity, side real female nudity, mother is laying on a table getting waxed and the viewer gets the same view from the front and the side including side rear nudity as well as her pubic hair, pregnant woman is shown completely topless; light alcohol usage, casual wine consumption and champagne, no drunkenness; mother and father both smoke cigarettes; high amount of miscellaneous immorality throughout the movie, the entire concept of the story is based on a dysfunctional family, the parents are wanting a divorce, but neither one wants the responsibility of taking care of their 12-year-old son, during a very loud and bitter argument the son realizes this truth and decides to run away, the mother is blatant about the fact that she never wanted this son in the first place and that she should have aborted him, the main drive with the parents not getting divorced is rooted in the fact that the father could lose his job, the father has already impregnated another woman while still married, brief examples of lying and deception.

LOVELESS is a Russian drama following the resentful relationship of a couple in the midst of a very bitter divorce.

As the movie opens, Zhenya and Boris have both taken up passionate love affairs with new lovers already. In fact, Boris is already expecting a child with another woman in a few short months. During a very bitter argument in the kitchen regarding who will take custody of their 12-year-old son, Alyosha, their son overhears both of them say that they don’t want him, and decide to send him to a children’s home. Already having spats with his mom on a daily basis anyway, Alyosha leaves for school the next day and doesn’t return.

Meanwhile, that night day Zhenya is out on a date with her lover and doesn’t return until very late. As Boris is also spending time with his impregnated mistress, it takes almost two days for either parent to realize their son hasn’t been home.

Zhenya has the police come over immediately to file a missing persons report. However, they have a protocol of waiting almost a week before they begin to look for a missing child because the child usually returns home after a few days. The police officer gives Zhenya information for a group of volunteers who help search for missing children and runaways. During the coordinators questioning about their son, it’s obvious that neither Zhenya or Boris know Alyosha that well or are as concerned as they probably should be.

Forced to explore all possibilities, Zhenya and Boris embark on a three-hour journey near Moscow to talk to Zhenya’s mother, in case their son might have run away to her. During this trip, the bitterness, resentment and hatred they harbor for each other begins to explode. Not finding Alyosha there, Zhenya begins to go on a tirade about how she never should have had their son or married Boris. Furious, Boris kicks Zhenya out of the car and continues to search with the coordinator for his son. Both must eventually continue with their lives and deal with the reality of their failures, although the absence of their 12-year-old son seems to be more of a bittersweet reality for them.

LOVELESS is an Oscar entry movie that follows the classic foreign movie ambiguous type of storytelling. As both people involved in this marriage have the desire to move on with their lives and leave this chapter behind, they are left with the “baggage” of a 12-year-old child they don’t want and don’t know how to raise. This movie takes a pretty pessimistic tone to life and the decisions humans make. It deals deeply with people’s mistakes and regrets, while commenting on the idea that staying together in a relationship, or staying with one person, is a conscious choice that’s not necessarily natural or easy to so. It shows how people tend to blame others for their mistakes instead of owning up to them, when, in reality, the only person who can change anything about one’s life is oneself.

As such, LOVELESS takes the Romantic position that modern society dehumanizes people, warping their ideas of love and creating social and psychological chaos. Its Romantic, rather hopeless worldview also shows that a strong hedonistic paganism dominates the main characters, who pursue their own sexual and worldly desires above all else, including their own son. The movie seems to recognize that selfless love is a moral standard, but no moral compass guides anyone in the movie except for a community volunteer who tries to help parents locate their son. Also, the father’s boss is a very strict Christian who doesn’t allow divorce within the company but the boss is portrayed as the bad guy keeping the family from happiness, though the parents eventually seem to realize they have no one but themselves to blame. LOVELESS also contains a high amount of questionable content, including multiple sex scenes, explicit nudity and plenty of foul language.