"A Funny and Inspired But Marred Celebration of the Entrepreneurial Spirit" 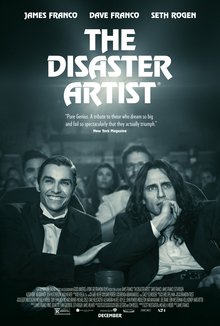 Based on a true story, THE DISASTER ARTIST is an unusual comedy about the unlikely friendship between a filmmaker and an actor. Tommy Wiseau and Greg Sestero are two hapless losers who meet in a San Francisco acting class. They bond over having an unshakable – and largely unmerited – belief in themselves and their talents. Greg is inspired by Tommy’s energy and charisma. So, they uproot their lives and become roommates in Los Angeles. They start filming a movie called THE ROOM, but they soon become aware they’re trapped in a disaster in the making.

THE DISASTER ARTIST hilariously shines a good-natured light on the underbelly of show business dreams, in the world of microbudget filmmaking flooding Los Angeles. James Franco directs it as if he were actually Tommy Wiseau. He also immerses himself in a bizarre yet appealing performance. However, the movie contains frequent obscenities, several strong profanities and a sequence where Greg and Tommy film a sex scene for their movie. MOVIEGUIDE® advises extreme caution for adults, though THE DISASTER ARTIST is a well-made comedy for adults presenting a pro-capitalist perspective, and loyalty, friendship and the American Dream.

Dominant Worldview and Other Worldview Content/Elements:
Strong Romantic worldview where two men become friends during an acting class and pursue their personal capitalist dreams to make their own movie in Los Angeles, with a twist of fate that ironically shows them succeeding despite their failures, with some strong moral elements that include the story’s pro-capitalist theme and a celebration of loyalty, friendship and perseverance.
Foul Language:
At least 86 obscenities (more than two-thirds are “f” words), seven strong profanities and 12 light exclamatory profanities.
Violence:
Brief depiction of violence that is comically directed as a scene in which a drug dealer punches a teenage boy.
Sex:
A comical scene depicts the filming of a sex scene in a low-budget movie and one main character has a girlfriend.
Nudity:
Actor making a sex scene in a movie has clumsily encased his private parts in papier mache (crew laughs at the sight of this, which is briefly shown to elicit laughs from viewers as well), brief upper female nudity, and images of rear male nudity during sex scene being filmed for low-budget movie. Alcohol use: Yes.
Smoking and/or Drug Use and Abuse:
No smoking or drugs, but movie within a movie has a character who’s supposed to be a drug dealer.
Miscellaneous Immorality:
Jealousy, one main character is a little paranoid, and two main characters exhibit some narcissistic pride, but their shortcomings are exposed, even though they accidentally achieve a measure of success.

Based on a true story, THE DISASTER ARTIST is a highly unusual, comical biopic about the unlikely real-life friendship between filmmaker Tommy Wiseau and actor Greg Sestero, two hapless losers who meet in a San Francisco acting class and bond over having an unshakable – and largely unmerited – belief in themselves and their talents. THE DISASTER ARTIST is very funny and well made, with strong pro-capitalist elements, but it contains many “f” words and other obscenities and a scene where the two would-be filmmakers comically film a sex scene for their movie, so extreme caution is advised.

Greg is an idealistic yet largely clueless actor mesmerized by Tommy’s ability to draw seemingly endless waves of energy and emotion onstage in their acting class. Fascinated by his energy, they become fast friends, sharing their showbiz dreams to the point they uproot their lives and become roommates in Los Angeles.

While Tommy is very friendly and highly charismatic, he remains a man of mystery throughout, claiming to spend $6 million on THE ROOM despite the fact that it looks like it cost $500,000, and never explains where he derives his extensive funding. He is highly energetic as a director on-set, catching all around him in his waves of enthusiasm even though, in their more reflective moments, he and Greg are aware they’re trapped in a disaster in the making.

Will they, and their careers, survive?

THE DISASTER ARTIST shines a good-natured light on the underbelly of show business dreams, revealing the world of microbudget filmmaking that floods Los Angeles. While it features frequent obscenities and several strong profanities, the movie generally applies a comical tone to the characters and their behavior, good and bad..

Besides the foul language, the movie’s biggest offense probably comes from an extended sequence that depicts the filming of a sex scene in THE ROOM, which was so poorly shot, lit, composed, and edited, and then inexplicably had this footage repeated elsewhere in the movie. The scene includes some nudity, including brief upper female nudity, lots of rear male nudity and a quick shot of Tommy clumsily having encased his private parts in papier mache, a sight which garners lots of laughs and snickers from the crew making THE ROOM. James Franco not only directs THE DISASTER ARTIST as if he were actually Tommy Wiseau. He also immerses himself in a bizarre yet appealing performance.

Despite is objectionable elements, THE DISASTER ARTIST is a well-made, infectious comedy and biopic that shows a positive, pro-capitalist depiction of loyal friendship and the American Dream. It makes for enjoyable and sometimes even inspiring viewing, but MOVIEGUIDE® advises extreme caution, even for adults.