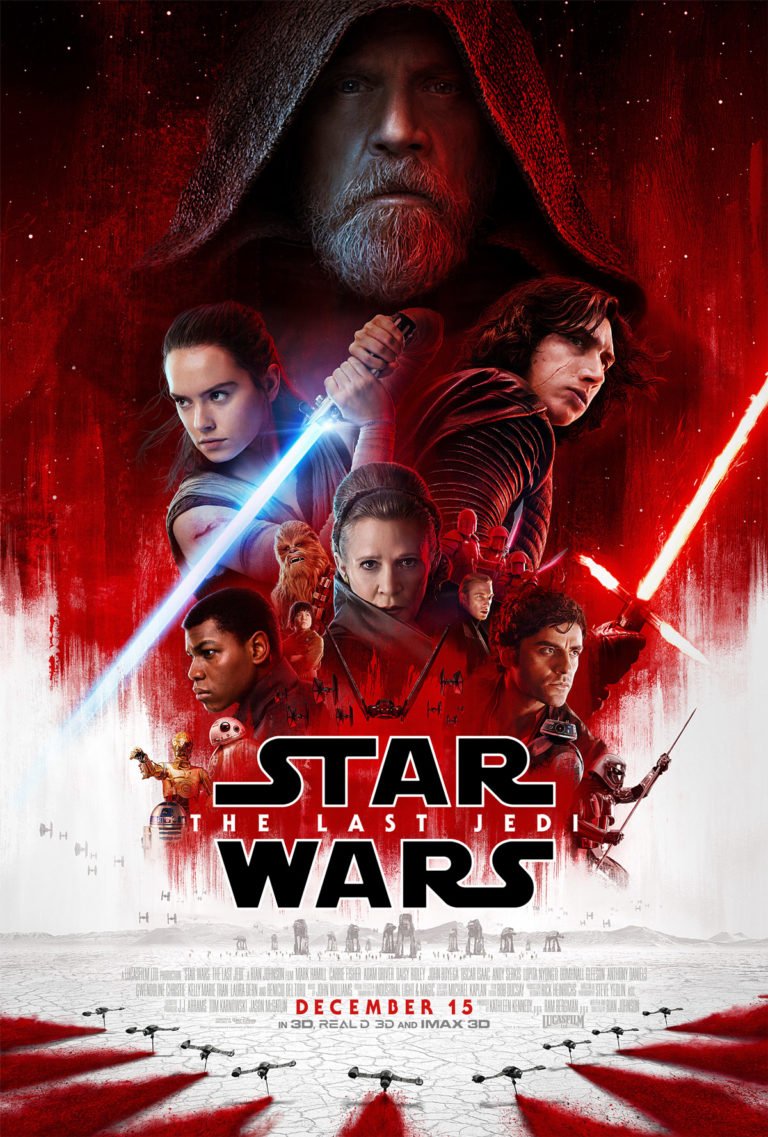 STAR WARS VIII: THE LAST JEDI opens with the totalitarian First Order’s starships attacking the Resistance rebel base. The rebels make a desperate attempt to escape. Barely, the rebels jump to light speed. Meanwhile, Rey, the heroic female fighter from Part VII, tries to convince Luke Skywalker to train her in the ways of the Force. The bad guys quickly track down what’s left of the rebel fleet. Also, Luke’s evil nephew uses the Force to astral project himself to connect with Rey. Can the rebels survive? Will Rey escape the clutches of Luke’s nephew and his cruel master?

STAR WARS VIII: THE LAST JEDI is slightly too long and follows too many plotlines, but it’s a crowd-pleasing science fiction blockbuster with some rousing moments and lots of heroic derring-do. Regrettably, the movie has a very strong New Age, Hindu, occult worldview that overwhelms its moral, redemptive content and themes. Thus, THE LAST JEDI promotes New Age, pagan practices like meditation, levitation, astral projection, ontological nominalism, magical thinking, and mind over matter, rather than the free gift of Grace through Jesus.

Dominant Worldview and Other Worldview Content/Elements:
Very strong, lightly mixed or syncretistic New Age, mystical pagan worldview promoting false Hindu, pantheistic and occult practices of meditation, astral projection, levitation, ontological nominalism, magical thinking, and mind over matter (at one major moment, Luke Skywalker levitates while assuming the “lotus” position, like some sort of bogus Hindu yogi) that overwhelm the movie’s moral, redemptive elements, which include a character says “God speed,” a character urges prayer and brief talk about saving souls and which promote fighting for freedom, for re-establishing a republic and against totalitarian evil, as well as trying to get a conflicted bad guy to repent and turn back toward the light, plus brief implied anti-capitalism.
Foul Language:
Six relatively light obscenities (mostly “d” and “h” words).
Violence:
Almost constant action violence includes battles and explosions in space, battles on two different planets, two heroes destroy a casino resort by riding through it while sitting atop large alien animals used for racing, duels between people wielding lightsabers and lightsaber whips, and laser battles between soldiers and rebels.
Sex:
No sex scenes.
Nudity:
Upper male nudity in one or two scenes.
Alcohol Use:
Background alcohol use in scenes set in a gambling casino.
Smoking and/or Drug Use and Abuse:
No smoking or drugs.
Miscellaneous Immorality:
Gambling at a casino resort, stealing, brief moral relativism, implied slavery but rebuked.

STAR WARS VIII:  THE LAST JEDI follows a powerful young woman who tries to convince Luke Skywalker to train her in the ways of the Force while the totalitarian First Order closes in on Princess Leia and her small band of freedom fighters. Though too long by about 15 minutes, THE LAST JEDI is a crowd-pleasing science fiction blockbuster with some rousing, uplifting moments and lots of heroic derring-do, but the movie inserts strong, annoying Hindu, New Age, pantheistic, nominalist, occult elements and references that overwhelm the positive elements.

The movie opens with the totalitarian First Order’s starships attacking the rebel base of the Resistance. The rebels are making a desperate attempt to escape their clutches. Barely, the rebels are able to jump to light speed and disappear.

Meanwhile, Rey, the heroic female fighter from Part VII, tries to convince Luke Skywalker to train her in the ways of the Force. However, Luke is disillusioned by his failure to train Han Solo and Princess Leia’s son, Ben. Luke senses the same dark power lurking in Rey. Also, he has come to believe that he should be the last Jedi.

Back with the rebels, Princess Leia and her people realize that the First Order has been able to track what’s left of the rebel fleet. Finn has woken up from his wounds and tells Captain Poe Dameron that he knows where they can find and dismantle the First Order machine that’s tracking the rebels on their lead starship.

However, the rebel fleet is running out of time and power. Making matters worse, Rey discovers that, using the Force, she and Ben can communicate with one another while Rey’s hiding on Luke’s little island. Ben, who now calls himself Kylo Ren, is trying to turn Rey toward the Dark Side of the Force.

Can Finn and Poe dismantle the tracking device? Can what’s left of the rebel fleet survive? Will Rey escape the clutches of Kylo Ren and Kylo’s evil master, Snoke, the Supreme Leader of the First Order?

STAR WARS VIII:  THE LAST JEDI sometimes has too many balls in the air. At one point, the movie switches between four different subplots. So, there are scenes where Finn and Rose, a technician Finn meets, are on one planet trying to find help in breaking the code on the tracking device, Poe is on the lead rebel cruiser trying to convince his superiors to follow the plan to dismantle the tracking device, Rey is on the island with Luke, and Kylo Ren is back on his master’s starship trying to find a way to turn Rey and overcome a tongue lashing by his evil master. The multiple plotlines, along with some multiple endings, sometime slow things down.

That said, THE LAST JEDI has great characters, some touching moments, comedy, and lots of action, jeopardy, conflict, and tension. In fact, it has one of the better STAR WARS scripts, despite the multiple endings that delay the movie’s resolution. Consequently, it’s a crowd-pleasing science fiction blockbuster with some rousing, uplifting moments and lots of heroic that will elicit more than a couple cheers.

However, even though THE LAST JEDI contains some redemptive, moral, heroic elements, it has a strong New Age, Hindu, occult worldview that overshadows its positive content and themes. Thus, the movie includes a positive but undeveloped reference to God and one to praying, as well as references to love and saving peoples souls. Mostly, though, the movie promotes New Age, pagan, occult practices like meditation, astral projection, ontological nominalism, magical thinking, and mind over matter. At one major point, Luke Skywalker even assumes the “lotus” position and levitates while using “the Force,” like some sort of bogus Hindu guru!