"We Are Not Alone" 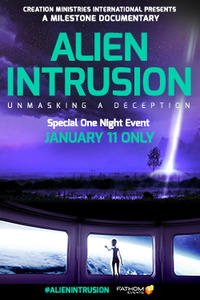 ALIEN INTRUSION:  UNMASKING A DECEPTION is a Christian documentary. It explores and scrutinizes the so-called “alien encounters” and other-worldly experiences that have permeated the news for many years. With the help of experts, “experiencers,” science, and religion, ALIEN INTRUSION tackles the questions, “Where did we come from?” and “Are we alone in the universe?” What about all those strange sightings, encounters and conspiracies? Can they possibly be right? Ultimately, ALIEN INTRUSION exposes the truth of the origin of these “benevolent creators”, and the dark history that surrounds them.

ALIEN INTRUSION does an exceptional job showing the power of Jesus Christ over the forces of evil around us and the importance of prayer. It presents the facts clearly, and employs the use of historical pictures, film and animation to help inform and engage the audience. The topics of rape, torture, demonic activity, and unbiblical worldview are discussed and dealt with by the filmmakers in a positive way that honors God -- Father, Son and Holy Spirit. Because of this as well as some potentially frightening images in ALIEN INTRUSION, caution is advised for older children.

Dominant Worldview and Other Worldview Content/Elements:
Very strong Christian, biblical worldview shows the power of Christ’s name against demonic forces, with a clear Gospel presentation showing the importance of prayer, and a multitude of Scripture references, plus demonic activity, alien encounters, and unbiblical worldviews are discussed, plus the use of hypnosis is mentioned, though none of these negative things are condoned.
Foul Language:
No foul language.
Violence:
The topic of physical abuse and a description of torture is dealt with tastefully, with some potentially frightening images;
Sex:
Rape is referenced.
Nudity:
No nudity.
Alcohol Use:
No alcohol use.
Smoking and/or Drug Use and Abuse:
No smoking or drug content.
Miscellaneous Immorality:
None.

The Christian documentary ALIEN INTRUSION:  UNMASKING A DECEPTION, based on the Amazon bestselling book by Gary Bates, takes a look into the truth behind the so-called “alien encounters” and other-worldly experiences that have permeated the news.

The “Final Frontier” has gripped the imaginations of mankind for years, leading them to ask the question, “Are we alone in the universe?” Closely linked to this question is another, “Where did we come from?” Opinions and theories abound. Some say that God created the world, some link our beginning to the “big bang,” while still others credit aliens with our creation. Those in the latter camp sometimes even have personal experiences to back them up. Some people say they have been “called” and “chosen” by the aliens resulting in an almost religious experience. The idea of being “chosen” by an other-worldly being is nothing new. While some people claim Jesus was just an advanced alien whose miracles were nothing of the sort; researchers noted with interest the experiences of people who found that these “alien encounters” ceased the moment they called on the name of Jesus. Others who were plagued with torment from these creatures from their childhood found relief once they claimed the power of Christ.

There are a multitude of testimonials ranging from the mundane and naturally explainable “strange sightings,” to conspiracies such as the Roswell incident, to the extremes of abduction, out of body experiences, and torment, but the questions remains. Are these experiences legitimate? Is it even possible for aliens to visit earth? And, the ultimate question is, “Are we alone in the universe?” With the help of experts, “experiencers,” science, and religion, ALIEN INTRUSION tackles the issues and questions above. It gives some answers that may surprise and unsettle many a moviegoer. It cites Ephesians 6:12, which says, “For we do not wrestle against flesh and blood, but against principalities, against powers, against the rulers of the darkness of this age, against the spiritual host of wickedness in the heavenly places.” Ultimately, ALIEN INTRUSION exposes the truth of the origin of these “benevolent creators”, and the dark history that surrounds them.

ALIEN INTRUSION is engaging and informative, with a multitude of interviews given by “experiencers” as well as experts in the field. The structure is clear and well thought out. It also creatively employs the use of historical pictures, video footage and animated videos to help the audience understand and engage with the information. It does a good job explaining the various theories and worldviews at play in this controversial topic while remaining clear on the truth. The power of calling upon Jesus in times of darkness is richly shown, as well as the hope that the Gospel of Jesus Christ provides. Though tastefully done, the topics of rape, torture, demonic activity, and unbiblical worldviews are discussed and addressed by the movie in a positive way that honors God. Because of this as well as some potentially frightening images, light caution is advised for older children.