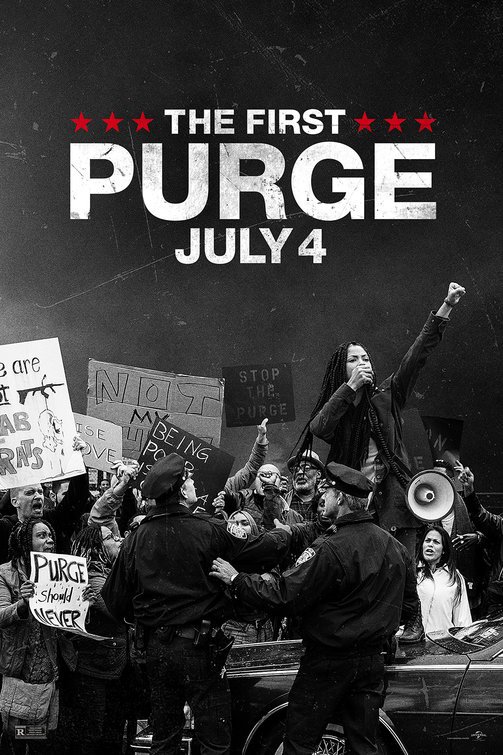 THE FIRST PURGE is a prequel to the first three PURGE thrillers about a third political party that gets elected to the White House. Under false pretenses, the new white government decides to test a theory that would let people commit whatever crime they want, even murder, for a 12-hour period each year. In reality, the government wants to start a campaign of genocide against poor black and brown people, to reduce the nation’s welfare costs. Staten Island is the first test area, but a local drug dealer gets wind of the evil plan and decides to lead a fight against it.

THE FIRST PURGE is slow to get started and isn’t that entertaining when it does. Also, THE FIRST PURGE has almost wall-to-wall foul language, plus extreme violence and brief lewd content. Even worse, its plot seems to be a leftist excuse to start a real race war between whites and blacks. As such, it plays into almost all the hysterical talking points against America that the Left has been promoting for decades. THE FIRST PURGE is offensive and lackluster.

(RoRoRo, PCPCPC, APAPAP, C, B, LLL, VVV, SS, NN, A, DD, MM):
Dominant Worldview and Other Worldview Content/Elements:
Very strong Romantic, politically correct worldview about a black drug dealer and his friends on Staten Island fighting against gangs of foreign mercenaries hired by a new racist white government in Washington, D.C. to commit genocide against poor black and brown people, which also promotes the Anti-American idea that America is a racist country, plus people try to find sanctuary in a Christian church with positive references to Jesus and salvation and some moral elements;
Foul Language:
At least 109 obscenities (including many “f” words), five strong profanities, one or two light profanities, and some “n” words;
Violence:
Some extreme violence with blood spurting and other strong or disturbing violence as people are gunned down, other gun battles take place, drones with machine guns spray automatic fire onto men with guns, teenager’s cheek is sliced by a knife-wielding lunatic, two women try to kill a man, but he subdues them, people shot point blank in the head, explosions, stabbings, etc.;
Sex:
Brief shot of depicted fornication between a man and a woman on the hood of a car, scene where two women try to seduce a man includes implied oral sex, kissing;
Nudity:
Rear female nudity of a young woman at a party and rear male nudity in one brief image in sex scene;
Alcohol Use:
Alcohol use;
Smoking and/or Drug Use and Abuse:
Smoking, woman snorts cocaine in one scene, and a main character is a greedy drug dealer who loves money but then becomes concerned about masked gangs murdering people he knows in his neighborhood; and,
Miscellaneous Immorality:
Lying, evil government cabal, government bribes poor people for secret ulterior motives, some racist stereotypes, man starts to rob ATM but is then stabbed to death, attempted genocide.

THE FIRST PURGE is a prequel to the first three PURGE thrillers about a third political party that gets elected to the White House and tests a theory that crime can be reduced drastically the rest of the year by letting people commit any crime they want for 12 hours. The experiment turns out to be a secret racist scheme to get rid of people in the inner city, especially black people, to reduce the welfare rolls.

The movie opens with a prologue explaining how the United States has been hit with a new economic crisis, a serious depression. Poverty and crime are running rampant, and people are fed up with the two main parties, the Democrats and Republicans. So, they put a third-party candidate into the White House, the head of the New Founding Fathers of America Party.

Based on a wacky catharsis theory from a white female clinical psychologist, the new administration thinks it can cut down on the crime rate the rest of the year if it lets people commit any crimes they want, even murder, for one 12-hour period each year. They decide to use Staten Island to test this theory. However, the administration secretly has hired a bunch of masked white mercenaries from overseas to go through the island’s poor black and Hispanic enclaves and commit genocide, to cut down on the welfare rolls.

When the masked men start hitting the poor enclaves, this spurs a local drug lord named Dmitri to fight back. Dmitri learns that the men are focusing on the building where his ex-girlfriend lives with her brother.

THE FIRST PURGE is slow to get started. Also, unlike the last PURGE movie, the movie’s “good guys” are slow to win any victories against the bad guys until late in the movie. This cuts down on the movie’s excitement. Also, THE FIRST PURGE has almost wall-to-wall foul language, extreme violence and brief lewd content. Even worse, its plot seems to be a leftist excuse to start a real race war between whites and blacks. As such, it plays into almost all the hysterical talking points against America that the Left has been promoting for decades. Ironically, at the same time, the filmmakers behind THE FIRST PURGE also promote the racist stereotype that most of the people on the welfare rolls are black and brown, not white. THE FIRST PURGE is offensive and lackluster.