THEY SHALL NOT GROW OLD 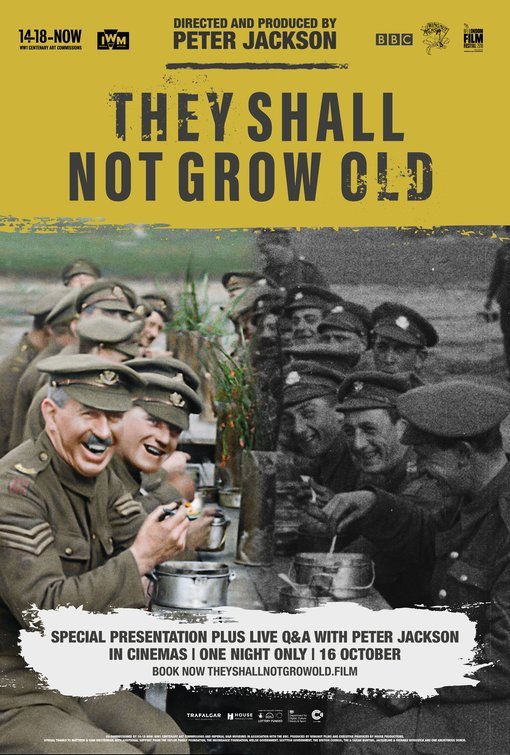 THEY SHALL NOT GROW OLD is a documentary showing viewers what the average British soldier’s life was like on the frontlines during World War I. The abhorrent conditions of their daily lives are exposed. The soldiers live on meager provisions and no sleep, as their senses are overpowered by the stench of decaying corpses. They are infested with lice as they witness bombings, shootings, gas, and death. Archival footage using the soldiers’ own words adds a personal note.

Using actual restored footage of the front lines gives THEY SHALL NOT GROW OLD a haunting truth of war. Director Peter Jackson achieves a monumental success by creating a movie told by soldiers 100 years ago who actually fought in World War I. The movie transitions into color when the soldiers arrive at the front lines. This adds a great deal of drama and realism. THEY SHALL NOT GROW OLD has a strong Christian, moral worldview. It perfectly illustrates the inhumanity of the living conditions in World War I, but also stresses the inherent dignity of each person and the need for compassion.

(CC, BB, L, VVV, S, N, A, D, M)
Dominant Worldview and Other Worldview Content/Elements:
Strong Christian, moral worldview illustrates the inhumanity of the living conditions in World War I and stresses the inherent dignity of each person and the need for brotherly relationships, along with kindness and care for others in the midst of war, plus the soldiers go to church and look after their chaplain;
Foul Language:
One “f” word;
Violence:
Continuous violence and gore, bloody and decaying corpses, plus war related violence and injuries;
Sex:
Some brief dialogue about brothels and naked women;
Nudity:
Men’s bare bottoms shown as they relieve themselves over a log;
Alcohol Use:
Some brief dialogue about drinking alcohol;
Smoking and/or Drug Use and Abuse:
Some brief dialogue about smoking;
Miscellaneous Immorality:
Some dialogue about a captain who orders a screaming and crying soldier to be shot, plus some dialogue and a brief image of gambling.

THEY SHALL NOT GROW OLD opens with 100-year-old black and white footage of World War I, told from the British point of view. Men, many who were boys as young as 15, signed up to fight in the war. They were full of enthusiasm, energy and patriotism. By the end of what was called “The War to End All Wars,” every romantic notion of war was snuffed out by the indescribable carnage, suffering and death of one million British soldiers.

Peter Jackson brings to life the vivid reality of war told candidly in chilling detail through the men who were there. The soldiers begin their journey as mere children who were told not to think for themselves but rather do what they’re told. Affected heavily by propaganda that make the war look exciting and a sense of duty to protect their country, they enter the war in droves. Many entered to their certain deaths.

The new British recruits receive training that’s that is aimed at creating soldiers out of boys. Training includes 12-mile marches with heavy equipment, meager food, weapons training, and church for every man on Sunday. When it’s time to go to the front lines, they take a train and a ship. Once they arrive on land, they march 20 miles while they carry more than 70 pounds of equipment each, to the trenches where the real story of The Great War is revealed.

Soldiers are given guides to lead them through the trenches. The living conditions in the trenches are unbearable. Some men are shot from enemy fire that cut right through the sandbags lining the trench walls. They suffer disease, lice and hunger. Trench foot and gangrene became a big problem due to severe flooding, which turns their “living quarters” into thick muddy ditches. Dead bodies are found hanging on barbed wire. Rats feast on solders buried in shallow graves. The soldiers must survive on meager meals, which consist of little meat and 16 men sharing one loaf of bread. The men on the front lines fought in the midst of horrible living conditions. The smell of decaying bodies, gas that blinded them permanently, artillery shells, and bullets are everywhere.

The soldiers’ journey takes place against the backdrop of the denial and whitewashing of the war by civilian society. The society that cheers them on to go and fight doesn’t welcome the soldiers who make it home.

As the soldiers reflect on what they had gone through, they recall the terrific kindness in each soldier. One soldier comments on the camaraderie and care each one had for the other. The longer the war continues, the soldiers recall they had less animosity toward the Germans. They begin to see the Germans as themselves, soldiers “stuck in a uniform.” Several British veterans refer to the Germans as “nice guys,” who helped carry injured British soldiers.

In the movie, British soldiers give an account of occasional two week breaks in European cities. It was in their human connection with one another that they could find some sanity and encouragement to continue. They play music and games, and gamble. A few soldiers note that each city they stopped in had a brothel, but being decent guys they ran away from the women.

Once they would return to the trenches, life would go back to insanity. Their hope they could win the war quickly with the new technology of tanks soon fades. Packed in the trenches like sardines, they face intense artillery battle. They leave the trenches for combat to cross acres of barbed wire that a rabbit couldn’t even fit through. Soldiers push on while they are sprayed with machine guns.

On November 11, 1918, the war is over with a British victory. The men go home without a celebration. One veteran describes the end of the war as “the flattest moment of our lives. . . . No cheering. . . no singing; We were too far gone.” Once they return home, they are unwanted, misunderstood and jobless. One soldier claims that a “man’s life wasn’t worth anything after the war.” No one understands or wants to talk about the war that made so many young men “live and behave like animals.”

World War I is one of the great tragedies of the modern era. THEY SHALL NOT GROW OLD has a strong Christian, moral worldview that doesn’t shy away from criticizing the patriotic excesses that led to the war. It perfectly illustrates the inhumanity of the living conditions in World War I, but it also stresses the inherent dignity of each person and the need for brotherly relationships, along with kindness and care for others in the midst of war. There are references to soldiers going to church and looking after their platoon’s chaplain.

Director Peter Jackson achieves a monumental success by creating a movie told by soldiers one hundred years ago who actually fought in the war. The movie is a one of a kind triumph. In terms of dialogue, he acquired an arsenal of accurate information by hiring a professional lip reader to decipher dialogue from 100 hours of old black and white silent footage. Jackson used some actors to recreate some of the dialogue. Much of the dialogue is extracted from a large collection of oral history. In terms of visuals, Jackson spent over two years restoring old footage and speeding it to double the amount of frames per second than the original. The movie transitions in color when the soldiers arrive at the front lines. This adds a great deal of drama and accentuates the real lives of the soldiers. They speak to us still in THEY SHALL NOT GROW OLD.

Note: THEY SHALL NOT GROW OLD screens Dec. 17 and 27 through Fathom Events, but will get a regular theatrical release in selected cities on Jan. 11, 2019 and an expanded release in the Top 25 markets on Feb. 1, 2019, Super Bowl weekend.

Watch THEY SHALL NOT GROW OLD: