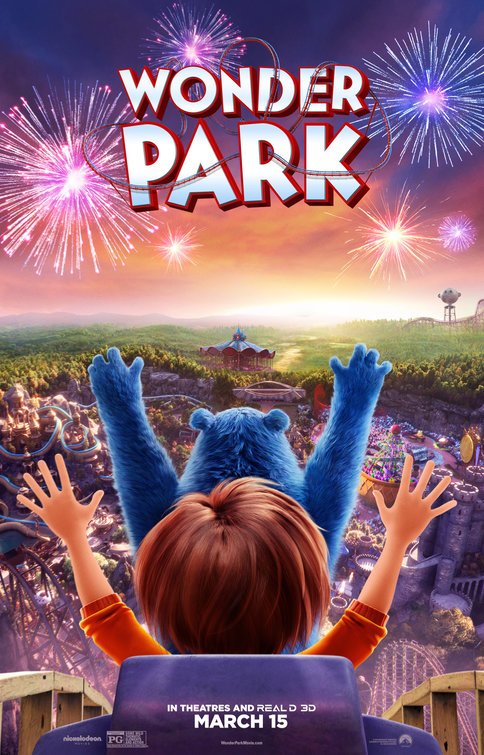 WONDER PARK is a delightful animated comedy. June and her mother have created a wonderful, exciting theme park called Wonder Park. June loves to create and spend time dreaming up ideas with her mother, especially her idea about a theme park named, Wonder Park. When her mother becomes sick and has to go away for treatment, June puts everything she has made for Wonder Park away. One day June is in the forest and sees a Wonder Park sign and a roller-coaster. She takes the roller-coaster which goes into the very world she had given up, Wonder Park. There, June learns that the park is in a battle with the forces of darkness.

WONDER PARK is an entertaining movie with a strong redemptive, moral worldview and beautiful animation. The main character has to sacrifice herself to help save the others. She also loves her family and wants to care for others. WONDER PARK presents a very positive example of family and parenting a redemptive, moral worldview about following the light and fighting darkness, though sometimes it feels as if the story falls short.

(CC, BB, FR, M):
Dominant Worldview and Other Worldview Content/Elements:
Strong redemptive, moral worldview about sacrifice, caring for others, helping others, loving others, good versus evil, light versus darkness, mentions of a miracle, and one Indian character thanks Krishna
Foul Language:
No foul language
Violence:
No violence
Sex:
No sex
Nudity:
No nudity
Alcohol Use:
No alcohol
Smoking and/or Drug Use and Abuse:
No smoking or drugs; and,
Miscellaneous Immorality:
One male character mentions another male character is handsome and charming.

WONDER PARK is an animated comedy about a girl named June and her mother who create a wonderful, amazing, exciting, theme park called Wonder Park, but June must remember how she and her mother created the park when it’s threatened by dark forces. WONDER PARK is a delightful, heartfelt movie with a strong redemptive, moral worldview but it sometimes feels like the story falls short.

June loves to create and spend time dreaming up ideas with her mother, especially her idea about a theme park, named Wonder Park. Every day is a new adventure for June, and, one day, she decides to make a roller coaster out of the items she has found around her house and yard. The rollercoaster goes so fast that she and her best friend fly into a road with semi-trucks, which gets her in a lot of trouble. Though, her mother tells her to always dream and always create no matter what.

One day June’s mother tells her she is very sick and has to go away for some special treatment. June is completely distraught and no longer wants to work on Wonder Park because her mother is no longer able to help her.

Years pass, and June has become very responsible and takes care of her father while her mother is getting treatment. She no longer wants to work on Wonder Park and decides to put it away all together. When her father urges her to go to Math camp and puts her on the bus, she runs away in order to get back to him. She runs out of the bus into the forest to hike back to her father, believing she needs to be there to take care of him. Just as she enters the forest, she sees a sign that says Wonder Park and a roller-coaster that pushes her into the park. As she enters, June sees all the characters she had made with her mother, but this time they come to life. The characters tell her the park is being destroyed by darkness, and they don’t know how to fight back. Will June be able to remember how she and her mother created the park to get the park back in order?

WONDER PARK is an entertaining movie with some heartfelt moments. The movie has amazing animation and creative design ideas. Viewers might wonder if the filmmakers put all their energy in the spectacle and creativity, rather than the actual flow of the story. Even so, they will enjoy the characters and the animation. The best viewer experience for this movie most likely would be 3D because the viewer would feel as if they were on theme park rides.

WONDER PARK has a redemptive, moral worldview about following the light and fighting darkness. The movies stresses being a positive force and mentions keeping the light inside you. There are some metaphorical elements in the movie. For instance, one character hears from a supernatural force that’s leading him and guiding him. Also, the main character has to sacrifice herself to help save the others. She also loves her family and wants to care above herself. WONDER PARK presents a very positive example of family and parenting.