"Good Guys Make Sure Two Notorious Criminals Get Their Comeuppance" 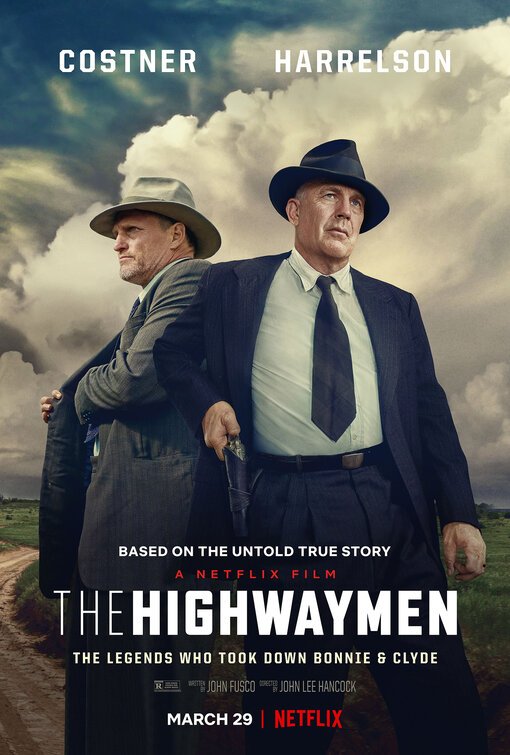 THE HIGHWAYMEN stars the dream team of Kevin Costner and Woody Harrelson as Texas Rangers Frank Hamer and Maney Gault, respectively. Bonnie and Clyde embark on a murderous bank-robbing spree across the South and Midwest during the Great Depression. They are quickly regarded as Robin Hood-style heroes by the general public because they are cleaning out banks. The top-level federal agents assigned to stop the criminal couple keep failing their assignment. This failure reluctantly leads Texas Governor Ma Ferguson to hire Hamer and Gault to bring down the two notorious bank robbers.

Costner and Harrelson make an excellent team in THE HIGHWAYMEN, both in the story and in terms of their chemistry and performances. There are a couple fun foot and car chases, and a shootout that’s effectively intense. The period details, costumes and settings are all superbly done. THE HIGHWAYMEN is deftly directed by John Lee Hancock of THE BLIND SIDE and SAVING MR. BANKS. It’s an entertaining, well produced and well-acted crime drama where the good guys win, but some foul language and bloody violence warrant strong caution.

(BB, PP, LL, VV, AA, D, M):
Dominant Worldview and Other Worldview Content/Elements:
Strong moral worldview where two policemen bring down two notorious bank robbers during the Great Depression
Foul Language:
11 obscenities and three strong GD profanities
Violence:
Crime violence includes some car and foot chases, an intense shootout, and a burst of gunfire against two notorious criminals
Sex:
No sexual content
Nudity:
No nudity
Alcohol Use:
Alcohol use and one policeman has a drinking problem he must overcome
Smoking and/or Drug Use and Abuse:
Smoking but no drugs; and,
Miscellaneous Immorality:
Some incompetent, unreliable politicians.

It’s easy to assume that the modern-day obsession with celebrity scandals has arisen only in the 25 years since the O.J. Simpson freeway chase and trial, but the new Netflix movie THE HIGHWAYMEN serves as a bracing reminder that Americans were losing their collective minds over notorious figures in the news decades before the infamous football player captured the nation’s attention.

Starring the dream team of Kevin Costner and Woody Harrelson as Texas Rangers Frank Hamer and Maney Gault, respectively, the movie presents an in-depth look at the men who brought down the notoriously violent bank robbers Bonnie Parker and Clyde Barrow. In essence, it serves as the flipside to the classic 1967 crime movie BONNIE AND CLYDE. While it doesn’t quite match up to that movie’s classic status, it’s got plenty of terrific attributes of its own.

Directed by John Lee Hancock (THE BLIND SIDE, THE FOUNDER, SAVING MR. BANKS) from a script by John Fusco of YOUNG GUNS fame, THE HIGHWAYMEN takes a slow-burning, psychological approach to much of its storytelling. As Bonnie and Clyde embark on a murderous bank-robbing spree across the South and Midwest during the Great Depression, they are quickly regarded as Robin Hood-style heroes by the general public because they are cleaning out banks.

The top-level federal agents assigned to stop the criminal couple keep failing their assignment. This failure leads Texas Governor Ma Ferguson (Kathy Bates) to hire Hamer and Gault against her wishes. Everyone regards them and their old-school approach to crime-solving outdated. However, soon these Rangers are proving everyone wrong by drawing ever closer to the evildoers using old-fashioned sleuthing, excellent interview skills and good old intuition.

Costner and Harrelson make an excellent team both in the story and in terms of their chemistry and performances. Harrelson’s Gault is a haunted alcoholic trying to regain his dignity but still provides the usual, slyly wicked comic relief the actor is famous for in his many roles. Costner, meanwhile, is also haunted by violent encounters in his past cases. In the movie’s best-acted scene, he faces off against veteran character actor William Sadler (who plays Clyde’s dad, Henry), as they trade sad stories and realize that Clyde easily could have steered his life in a better direction.

There are a couple fun foot and car chases, and a shootout that’s effectively intense, along the way. The period details, costumes and settings are all superbly done, which makes this another in a growing list of examples of Netflix’s determination to become a source of A-list movies well beyond its recent Best Picture nominee ROMA.

With a minimum of foul language, no sex or nudity, and great discretion in handling its violence, THE HIGHWAYMEN is a movie that most media-wise adult viewers can enjoy.