THE CURSE OF LA LLORONA 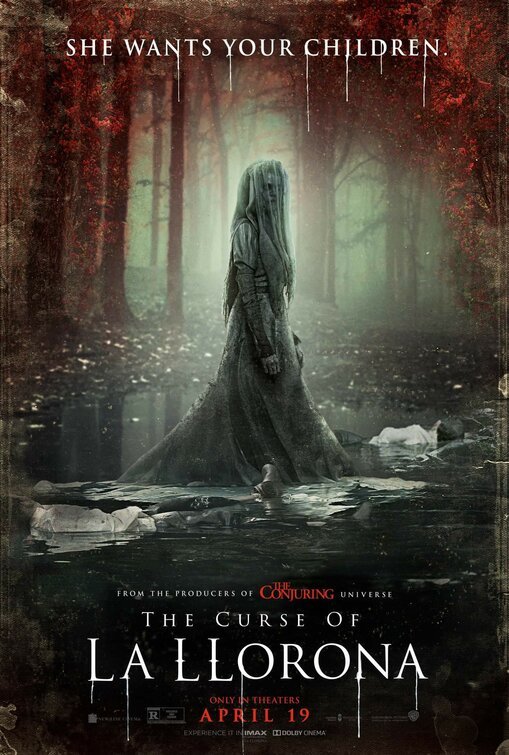 THE CURSE OF LA LLORONA is a horror movie about an evil spirit that attacks children. Anna, a social worker, takes a mother away from her children because they live in horrible conditions. When a demon starts appearing to Anna’s children, things start to get scary, and Anna questions if the demon was also plaguing the other family. Anna goes to a Catholic priest for help, but the church’s red tape proves to be a problem. So, Anna turns to a shaman who has given up on the church but not on God.

THE CURSE OF LA LLORONA is a very scary, well-made horror movie. La Llorona is a Mexican Folktale well known in Latin American culture. The director does a great job with the suspense and jump scares. The movie even has some laughs, which is a nice relief. THE CURSE OF LA LLORONA provides a good representation of good versus evil, and ultimately God wins out. However, the movie’s positive Christian elements are mixed with some New Age, occult elements. So, MOVIEGUIDE® advises extreme caution for THE CURSE OF LA LLORONA.

(CC, BB, Pa, FR, O, Ab, L, VV, N, A):
Dominant Worldview and Other Worldview Content/Elements:
Strong Christian, moral worldview ultimately in a story about a demon haunting children includes crosses, crucifix, prayer, one character comes to faith, rosery, sign of the cross, a positive priest character, and a man mentions he has confidence in God, but mixed with New Age pagan elements including a dream catcher, incense and some pagan symbols, plus a character says she prayed to a demon, and there’s some moral relativism
Foul Language:
One light profanity, one obscenity
Violence:
Images of blood, child burned and two children died but not seen, two children drowned by mother
Sex:
No sex scenes or crude dialogue, but some mentions of adultery
Nudity:
Child in bathtub
Alcohol Use:
Light drinking
Smoking and/or Drug Use and Abuse:
No smoking or drugs; and,
Miscellaneous Immorality:
Nothing else objectionable.

THE CURSE OF LA LLORONA is a horror movie about a female social worker whose own children become haunted by a demonic spirit after their mother tried to help two children killed by the demon. THE CURSE OF LA LLORONA is a very scary, well-made horror movie, but it has a mixed worldview with both good and bad things. So, MOVIEGUIDE® advises extreme caution.

Anna is a social worker who is investigating a mother and her children. The apartment the children are living in is dark, with only candles lit and black paint on the walls. When Anna opens the door to the closet, she sees the two children on the floor. The mother, Patricia begs Anna not to take away her children, saying she was protecting her children from an evil demon named La Llorona, but Anna still takes them away for the night to stay in a safe house. The children tell her they are never safe because La Llorona is following them.

In the middle of the night Anna is called in because the children are found in the river, dead. Being a single mother, Anna has to take her two young children to the scene of the crime and tells them to stay in the car. When Anna goes off to see what is happening, her son, Chris leaves the car to look around the corner. A lady dressed in a white dress and veil comes to lure Chris in to her midst by crying and calling out to him, this is the demon La Llorona. Now, La Llorona is trying to get hold of Chirs and Samantha, Anna’s daughter. Once Anna returns, however, La Llorona goes away and the family goes home.

Things have been tough ever since Anna’s husband, who was a cop, was killed in action. Sometimes the children are even left at home, and Anna comes home and sees that they have bruises on their arms. When asked what is it about, they say they’ve seen La Llorona. Strange things start to occur in the house. So, Anna goes to a Catholic priest to ask what this could be. The priest says there is someone who can do an exorcism or bless their house, but it would take a long time to get that priest because of the red tape in the Catholic Church. He suggests Anna try an unconventional way, the Shaman named Rafael who has given up the church, but not on God.

At this point, things are getting so bad, with La Llorona appearing and hurting the children, that Anna goes to Rafael. Will they be able to fight the demon away?

THE CURSE OF LA LLORONA is a very scary, well-made horror movie. La Llorona is a Mexican Folktale well known in Latin American culture. The director does a great job with the suspense and jump scares. The movie even has some laughs to it, which is a nice moment of relief from the scary scenes. The music and lighting play a very big element, as they do with many horror movies, and in this case they are done very well.

THE CURSE OF LA LLORONA has a mixed moral worldview. The movie shows the light versus dark, evil versus good, and the benefits of prayer. However, the Shaman uses some New Age practices, though he also uses a Christian cross and prayer, which the movie clearly shows has strong supernatural power. Of course, in many exorcism movies, they put a huge emphasis on the icons the priest uses to perform the exorcism. In reality, though, it is solely the power of Jesus Christ that can destroy the Devil and his demons.

Watch THE CURSE OF LA LLORONA: