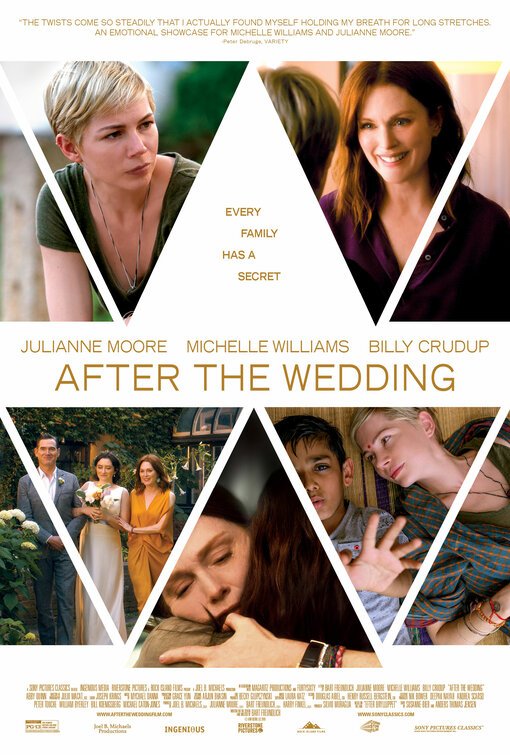 In AFTER THE WEDDING, Isabel is a passionate, single woman who has spent the last decade of her life helping run an orphanage in India. When a wealthy potential benefactor reaches out to her, Isabel has to fly to New York where she meets the benefactor in person to show the orphanage is worthy of her funding. Upon arrival, Theresa, a posh CEO, is swamped with her daughter’s upcoming wedding. She invites Isabel to her daughter’s high-end wedding and pushes their meeting back until the wedding is over. At the wedding, Isabel realizes Theresa is the adoptive mother of the daughter Isabel gave up for adoption 20 years ago. More revelations ensue.

AFTER THE WEDDING is a remake of an acclaimed 2006 Danish movie. It tells a beautiful story with strong positive values, excellent character development, and twists and turns that will keep most viewers on their toes. It’s an extremely emotional story, so be prepared to shed some tears. AFTER THE WEDDING has a strong moral, redemptive worldview promoting forgiveness. However, some tricky family situations, dishonesty and brief foul language warrant caution for older children.

(BB, C, L, S, AA, DD, M):
Dominant Worldview and Other Worldview Content/Elements:
Strong moral worldview with light redemptive elements promotes charity, generosity, compassion, mercy, and forgiveness, adoptive mother generously gives her money to a needy orphanage, adoptive mother finds her adoptive daughter’s birth mother and brings them together without bitterness, young woman shows mercy toward her adoptive parents, parents and forgives them for lying to her about her birth mother’s location, Isabel has compassion for children in India and works to give them a better life, young couple gets married with a pastor and don’t live together before marriage, there’s a past situation where unmarried teenage couple gets pregnant but gives up their child up for adoption, and strong examples of forgiveness, but there is a scene in the beginning that has some echoes of Eastern religion;
Foul Language:
Five obscenities (including one “f” word) and no profanities;
Violence:
No physical violence (adults have intense arguments, but no threatening violence is carried out);
Sex:
No sex scenes implied or depicted, demonstration of healthy relationships portrayed, daughter does not sleep with boyfriend until they are married, husband and wife have a loving relationship and treat each other fairly when challenging conversations arise, husband and wife kiss, past implied sexual immortality when teenagers had sex before marriage and got pregnant but give up their baby for adoption;
Nudity:
No explicit nudity though one scene shows woman sitting in bathtub (only her bare shoulders are seen);
Alcohol Use:
Social drinking at a wedding, working mother drinks wine after a long day, and a mother decides to get drunk on martinis after a stressful situation;
Smoking and/or Drug Use and Abuse:
No smoking, but one scene of drug use and a character takes take pills from doctor because of a terminal illness; and,
Miscellaneous Immorality:
Lying, selfishness and dysfunctional family situations but eventually resolved.

AFTER THE WEDDING is a remake of the 2006 Oscar-nominated Danish movie written by Susanne Bier. The 2019 screenplay rewritten by Bart Freundlich is an emotional roller coaster with raw, naturalistic, complicated characters that are fascinating to watch.

The movie opens up in a remote village in India where a woman named Isabel is teaching a group of young children in an orphanage. She is especially close to a little 8-year-old boy who we later learn she raised herself after she discovered him abandoned on the side of the road. Isabel is preparing to leave India for New York upon the request of a multi-millionaire who is considering donating $2 million to the orphanage. Isabel is not pleased she has to leave the children to beg for money from a wealthy New Yorker, but she agrees to go for the sake of the children’s needs.

When Isabel arrives in New York, she immediately feels out of place. She misses the children back in India and craves her simple life. She goes to meet Theresa to talk with her about the orphanage. Surprisingly, Theresa is not one of those stuck-up CEOs you would imagine one to be. She’s a hard-working go-getter with a compassionate personality. She has a brief talk with Isabel about the orphanage but confesses she can’t have this conversation right now because her daughter’s wedding is in a couple days. She invites Isabel to her daughter, Grace’s, high-end New York wedding and encourages her to attend. She agrees to talk with Isabel about the orphanage after this hectic, massive wedding is over. She extends Isabel’s stay in a posh hotel and buys her a lovely dress to wear to the wedding.

Isabel attends the wedding, where her heart is rattled. She realizes Theresa’s daughter is not Theresa’s biological daughter. Grace is Theresa’s adopted daughter, and Isabel is Grace’s birth mother. When Isabel is introduced to Theresa’s husband, she’s numb with disbelief. Theresa’s husband is her old boyfriend, Oscar, who got her pregnant 20 years ago. After the wedding, Oscar informs Theresa that Isabel is their daughter’s birth mother. After a challenging talk, Theresa and Oscar set their daughter, Grace, down and inform her Isabel is her birth mother. It’s revealed that Oscar and Isabel, 20 years ago, decided to give up Grace for adoption. They split ways, but Oscar returned to the orphanage without telling Isabel and took their daughter back. He raised her on his own until he met and married Theresa, who took Grace in as if she were her own daughter.

When Grace finds out Isabel is her birth mom and that her father never informed Isabel but took Grace back from the orphanage, she’s confused and distraught. She struggles to forgive her parents for lying to her. In turn, Isabel struggles to forgive Oscar for being dishonest to her. Thresa pays for Isabel to stay longer in New York so she can get to know her daughter.

However, just when the audience thinks all is well, the emotional plot thickens. Theresa has a secret herself, which to a tragic, yet beautiful and uplifting, ending.

AFTER THE WEDDING is a remake of a 2006 Danish movie. It tells a beautiful story with strong positive values, excellent character development, and twists and turns that will keep viewers on their toes. It’s an extremely emotional story, so be prepared to shed some tears. The high production values are exquisite with contrasting shots of New York City and a lowly orphanage in India. The movie has a strong moral, redemptive worldview promoting forgiveness. However, some tricky family situations, dishonesty and brief foul language warrant caution for older children.