THE ART OF RACING IN THE RAIN 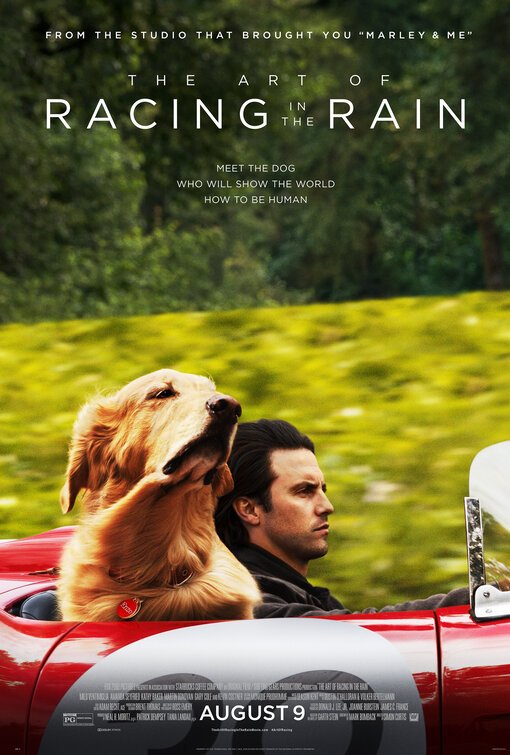 THE ART OF RACING IN THE RAIN tells the story of a family through the eyes of a dog named Enzo. Enzo watches as his owner falls in love, gets married and has a child. The family unit is very strong, until the Eve, Enzo’s human mom, falls sick. Will they all be able to get through the tough times of life?

THE ART OF RACING IN THE RAIN revolves around a family’s life, but extreme caution is advised because of elements focusing on reincarnation and promoting the concept of people manifesting their own destiny. The movie’s structure is a bit choppy, and the main character is a passive antagonist. That said, there are some heartwarming scenes throughout the movie, with Enzo drawing laughs and tears. However, Enzo tells the audience they can manifest their own “wins” simply by willpower. Also, Enzo’s goal is to be reincarnated as a human, and this promotes a New Age worldview that fails to acknowledge God’s plan for eternal life. Thus, THE ART OF RACING IN THE RAIN is excessive and inappropriate for children or media-wise families.

PaPa, FRFR, HH, B, L, V, S, N, A, D, M):
Dominant Worldview and Other Worldview Content/Elements:
Mixed worldview with strong New Age elements and false religion including a focus on reincarnation and some humanist elements where characters want to “manifest” and control their own futures, plus a character calls a stuffed animal “demonic” but doesn’t mean it literally as well as light moral elements that stress pro-life messages, acknowledges there’s life after death (although in a Hindu sense), and includes a scene of forgiveness, a positive reference to prayer and another scene where truth prevails over a falsehood;
Foul Language:
Four light obscenities, and five light profanities;
Violence:
Man shoves another man and repercussions are blown out of proportion in court, dog is hit by car, and a stuffed animal removes its own fluff in character’s dream;
Sex:
Light sexual content includes implied premarital sex, kissing between dating couple and married couples, and a comment is made about a character’s body part;
Nudity:
Naturalistic upper male nudity;
Alcohol Use:
Two drinking scenes at home, but no characters appear drunk;
Smoking and/or Drug Use and Abuse:
No smoking or illicit drug use, but a character with cancer receives chemotherapy, and a woman takes aspirin in multiple scenes; and,
Miscellaneous Immorality:
Situational disrespect toward elders, dysfunctional family portrayals.

THE ART OF RACING IN THE RAIN gives insight into the life of a family through the eyes of its trusted dog, Enzo (Kevin Costner). Enzo narrates as his owner, Denny Swift (Milo Ventamiglia), picks him out of a litter of puppies and integrates him into Swift’s daily routine. The two form a powerful bond that proves dog really is man’s best friend.

Denny is an aspiring Formula One racecar driver, and Enzo is quickly taken with learning everything he can about racing. Enzo attends races and watches videos with Denny, taking Denny’s lessons about the track and applying them to everyday life.

Enzo observes as Denny meets and marries Eve (Amanda Seyfried). Enzo is smitten when the couple becomes pregnant, and Eve gives birth to their daughter, Zoe. There are very strong pro-life messages here, as Enzo recognizes that a child in the womb has value, and it’s an honor to carry a baby. Enzo vows to protect Zoe with his life, and Zoe is just as taken with Enzo as she grows up.

When Eve falls ill, the family must work through unprecedented circumstances as they navigate their new normal. Enzo is confused about the changes but remains a faithful friend to each family member. Though Enzo can’t speak to his family, he demonstrates his love and support through gestures.

The movie’s structure is a bit choppy, as the dog’s perspective leaves the viewer wondering what’s reality and what’s just Enzo’s imagination. The Swifts’ love story is very inspiring, albeit forced and overly emotional at times. Some key plot points feel disjoined. They seem to interrupt the story’s narrative flow. The main character is a passive antagonist, meaning that they actually do not move the story along, but rather sit and watch.

THE ART OF RACING IN THE RAIN has some heartwarming scenes throughout the story, with Enzo drawing laughs and tears. While the movie may seem sweet and endearing, it grapples with some of life’s most serious questions, such as, Are we in charge of our own destinies and Is there life after death? Enzo tells the audience they can manifest their own “wins” simply by willpower, and acknowledgment of God and the supernatural is limited to one mention of prayer and jokes about a demonic stuffed zebra animal. Enzo’s ultimate goal is to be reincarnated as a human, and this promotes a New Age worldview that fails to acknowledge God’s plan for eternal life. Also, there are a few scary scenes. Families should also consider the movie’s approach to eternity and life after death. THE ART OF RACING IN THE RAIN is excessive and inappropriate for children or media-wise families.