SCARY STORIES TO TELL IN THE DARK 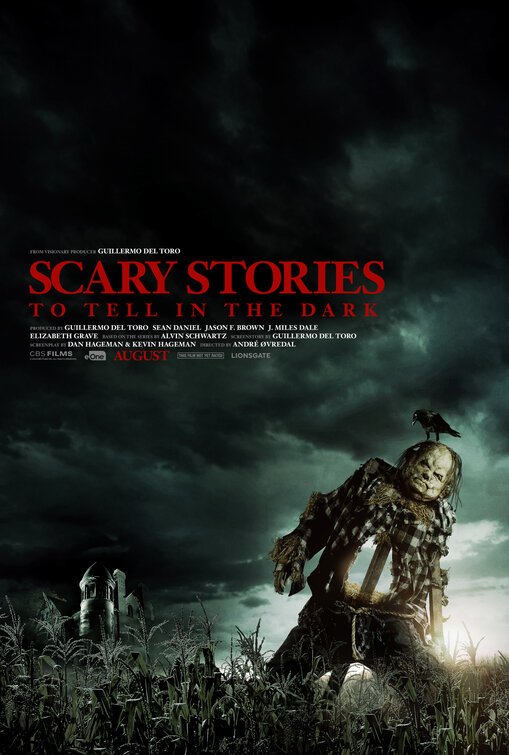 SCARY STORIES TO TELL IN THE DARK is a horror movie about three teenagers in a small Pennsylvania town in the Autumn of 1968 who encounter a female ghost. After visiting the mansion that the female ghost haunts, one teenager takes the book of stories that the ghost used to scare the town’s children decades ago. The book starts writing its own scary stories involving them and other people, and people start disappearing. The surviving teenagers figure out the ghost must be writing these stories, but how do you stop a ghost?

SCARY STORIES TO TELL IN THE DARK tries hard, but it’s often silly and unconvincing. Ultimately, the reason behind the hauntings, a ghost’s revenge, doesn’t make sense. The biggest problem, however, is that the surviving main characters end up appealing to the ghost’s moral conscience to get her to stop haunting them and their friends. God strongly condemns consulting with dead people in the Bible. SCARY STORIES TO TELL IN THE DARK also has an excessive amount of foul language, a few lewd comments and some scary, gruesome violence and creatures.

(OOO, B, C, PCPC, AcapAcap, LLL, VVV, S, M):
Dominant Worldview and Other Worldview Content/Elements:
Very strong occult worldview where a woman’s ghost decades after her death enacts her revenge against a town in 1968 and can manipulate physical reality and the supernatural (there are allusions in the movie that she’s using some kind of witchcraft or voodoo but her powers are never explained), with some moral elements, including an appeal to the ghost’s moral conscience, which is the way the plot problem is solved, plus a boy’s mother tells him the Lord will provide, but nothing more comes of her comment, and there are some strong politically correct allusions as the movie depicts TV images of the 1968 presidential campaign between Nixon, Humphrey and Wallace and of the Vietnam War (a side character makes a statement against the war with which some viewers might disagree), the movie contains hints of left-wing identity politics, and the bad guys are business owners;
Foul Language:
At least 12 obscenities, six strong profanities (three involving the Name of Jesus and three GDs) and 10 light profanities (OMG and OG);
Violence:
Some very strong and strong scary violence and situations throughout includes a ghost unleashes some humanoid body parts to fashion a gruesome looking walking body with a scary face that chases tries to attack people, the humanoid creature snaps the neck of a police officer to murder him, teenage driver traps creature between his car and a truck and then runs away, but the creature just disassembles its body parts to go under the car and reconnect together on the other side of the car, boy finds a “stew” that he starts to eat but then spits out when he finds it has a human toe in it, a walking corpse drags the boy into a wall, and he disappears, a humanoid scarecrow comes alive and stabs a boy who eventually turns into the same kind of scarecrow after spikes come out of his body, a scary looking fat woman in an insane asylum stalks and then grabs a teenage boy, and he disappears into her body as she hugs him, boy locks four people into the hidden section of a haunted mansion, but they escape, bugs crawl in and out of the eyes of the humanoid scarecrows, scores of tiny spiders come out of a large red growth on a teenage girl’s cheek, boy hits the head of a scarecrow with a bat multiple times, and two teenagers hear the old-time cylinder recording of a woman being roughly questioned and then given shock treatment by her brother, a doctor in an insane asylum;
Sex:
Some sexual comments between teenagers such as a teenager crudely admonishes his friend about getting too interested sexually in his pretty sister;
Nudity:
No nudity;
Alcohol Use:
No alcohol use;
Smoking and/or Drug Use and Abuse:
No smoking or drugs; and,
Miscellaneous Immorality:
The movie’s characters learn that the evil brothers of a woman framed her for the deaths of some children who were actually killed by pollutants from the family’s paper mill, and they commit their sister to an insane asylum (the sister tried to warn the townsfolk what really happened, so the brothers committed her to an insane asylum to hide the truth).

Set in a small Pennsylvania town, SCARY STORIES TO TELL IN THE DARK opens on Halloween night in 1968. Three high school friends, Stella, Chuck and Auggie, plan a prank against the school bully, Tommy, who’s always taking the bags of candy from the town’s trick or treaters. After they pull the prank, which includes using eggs and dog poop, Tommy and his friends chase them into the drive-in. Stella, Chuck and Auggie find refuge in the car of a Mexican teenager named Ramon, and the drive-in manager runs off Tommy and his friends. Chuck’s sister, Ruthie, was with Tommy in his car, but she stays.

With the mean bullies gone, Stella suggests they all go to the town’s local haunted house, a big mansion once owned by the Bellows family, which nearly 100 years ago, started the paper mill that put the town on the map. Legend has it that the Bellows family confined their daughter and sister, Sarah, to one room. A rumor started that Sarah would tell scary stories to the children in town, who then disappeared.

While exploring the mansion in the dark, Stella comes across Sarah’s book, which appears to be written in blood. Unknown to the others, Sarah hides the book in her backpack.

The next day, Stella sees in the book a new story written in blood or red ink about Tommy. Cut to Tommy trapped in his family’s cornfield, where he’s attacked by the scarecrow there. Stella and her friends learn that Tommy has disappeared, then Auggie’s sister is attacked by scores of baby spiders coming from a spider bite she got while in the haunted house.

Stella tries to return the book to Sarah’s room in the haunted house, but the book shows up again in Stella’s room and starts writing a story about Auggie. Stella, Ramon and Chuck figure out that the ghost of Sarah Bellows must be writing these stories, but how do you stop a ghost?

SCARY STORIES TO TELL IN THE DARK tries hard, but it’s sometimes silly and unconvincing. Ultimately, the reason behind the hauntings in the movie, a ghost’s revenge, doesn’t make much sense. Why punish the townspeople for something your evil brothers did to you? Of course, the whole idea that the spirits of dead people hang around the earth doesn’t make much sense in the first place.

The biggest problem with the movie, however, is its occult worldview. Thus, the surviving main characters end up trying to appeal to the ghost’s moral conscience to get her to stop haunting them and their friends. As God says in Deuteronomy 18:10-12, “Let no one be found among you who sacrifices their son or daughter in the fire, who practices divination or sorcery, interprets omens, engages in witchcraft, or casts spells, or who is a medium or spiritist or who consults the dead. Anyone who does these things is detestable to the Lord; because of these same detestable practices the Lord your God will drive out those nations before you.”

SCARY STORIES TO TELL IN THE DARK also has an excessive amount of foul language, a few lewd comments and some scary, gruesome violence and creatures.