"Celebrating Gangsterism in the Name of Radical Feminism" 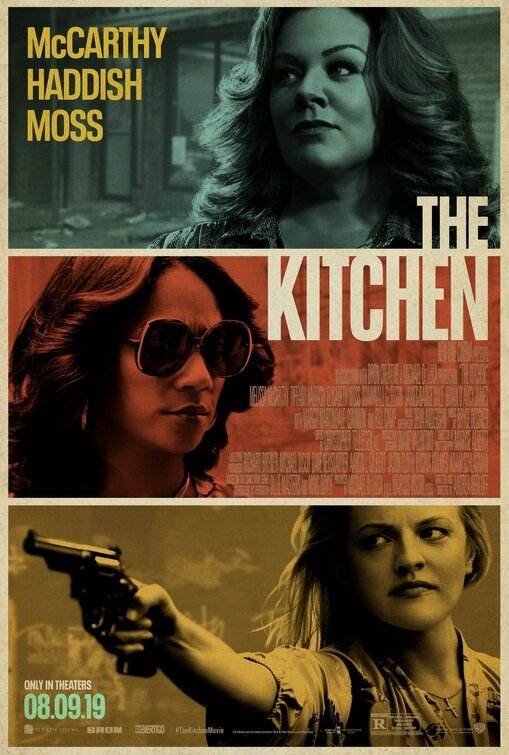 THE KITCHEN is a gangster movie based on an adult comic book miniseries. In the story, the wives of three Irish gangsters take over the rackets in Hell’s Kitchen in New York when their husbands are sent to prison for three years in the 1970s. The wives turn out to be more competent and perhaps even more ruthless than their husbands and the local Irish mob boss. The women run into problems with the local mob boss, the Italian mob and their husbands when their husbands get out of jail. Violent mayhem and plot twists abound.

THE KITCHEN follows the ultraviolent, foul-mouthed format of a Martin Scorsese gangster movie like GOODFELLOWS, but it’s not as polished or involving. The acting is solid and the soundtrack good, but the writing, production values and direction have weaknesses. Besides the frequent foul language and graphic violence, THE KITCHEN has a very strong Romantic, radical feminist worldview promoting lawless, hedonistic, immoral values. By the time it ends, it seems to celebrate gangsterism in the name of the lead character’s feminism. THE KITCHEN is abhorrent and totally unacceptable.

(RoRoRo, FeFeFe, PCPCPC, PaPa, APAPAP, AbAb, C, LLL, VVV, SS, N, M):
Dominant Worldview and Other Worldview Content/Elements:
Very strong Romantic, radical feminist, politically correct worldview promoting strong pagan values (including selfishness, vengeance, the ends justify the means, and other lawless, immoral, hedonistic behavior), with almost all the men (especially husbands) depicted as evil, venal or ultimately untrustworthy and the lead female character eventually feels she just has to just look out for Number One because society and men always takes advantage of women and people who are weak, plus there’s a very negative depiction of modern American society before the “woke” era of the Clinton and Obama administrations and today’s Me Too era and strong Anti-Christian content when lead female character gives a speech about not ever being able to rely on men and even God and though the Catholic priests in the Irish community in the movie can give a positive spiritual speech at a funeral, they are not shown opposing or even objecting to any of the gangsterism around them;
Foul Language:
At least 111 obscenities (including many “f” words and two “d” words in a song over the end credits), five strong profanities, five light profanities;
Violence:
Lots of extreme and some strong violence includes multiple pointblank shootings with blood spurting, a few images of bloody corpses, older woman is knocked down some street stairs to her death, hitman instructs a woman on how to cut up a dead body (viewers don’t see the body in the bathtub being cut up as he does), a couple dead bodies are put into a river leading to the ocean, man tries to rape a woman but then is shot in the head, and she gets his blood in her hair, husband punches wife in stomach two times before she kills him, two other women have their husbands murdered, a few people are beaten up in a couple scenes, and threats of violence;
Sex:
Partially depicted fornication and adultery in one scene, woman has a serious affair with an old lover after her physically abusive husband is sent to prison (she eventually murders the husband), another married man and his mistress are shown dead in bed after his wife has him murdered by hitmen, adulterous kissing, some New York street scenes where people walk by or stop near nude bars and strip clubs, references to prostitution (women gangsters take over the prostitution business in their territory), and some brief lewd sexual talk;
Nudity:
Upper male nudity, some brief female cleavage, images of street prostitutes with short skirts, and people walk by or stop near nude bars and strip clubs but no images of nudity in the advertisements;
Alcohol Use:
Some alcohol use and one or two scenes with drunkenness;
Smoking and/or Drug Use and Abuse:
Some smoking but no drug references (the gangsters in the movie, set in the late 1970s, strangely, only seem to be involved in running a protection/extortion racket and the local prostitution racket); and,
Miscellaneous Immorality:
Very strong miscellaneous immorality includes deceit, manipulation, betrayal, gangsterism, extortion, resentment of men and white people, bad husbands and the only “good” husband ends up betraying his wife and trying to take their children away, the average local community leaders and citizenry (including local union members and leaders) eventually support the lead female gangster and prevent her from being killed in one scene because she did things for them and helped them get work (the movie seems to implicitly support most if not almost all of this), etc.

THE KITCHEN is a gangster movie based on an adult comic miniseries about the wives of three Irish gangsters who take over the rackets in Hell’s Kitchen in New York when their husbands are sent to prison for three years in the late 1970s. THE KITCHEN follows the ultraviolent, foul-mouthed format of a Martin Scorsese gangster movie like GOODFELLOWS, but it’s not as polished and the movie eventually just becomes an abhorrent celebration of gangsterism in the name of a corrupt radical feminist ideology.

In the story, three married women are left without much income in 1978 when their Irish gangster husbands are put in prison for three years by an FBI-led sting. Ruby, who’s black, is the daughter-in-law of her husband’s mother, who helps run the Irish mob with one of her sons, Little Jackie. The Irish mob promises to support the women, but the first checks won’t even pay their rent. Ruby, Kathy and Claire offer to help the mob collect the protection money, but Little Jackie will have none of it. So, the three women decide to start doing it on their own. Especially when they discover that Little Jackie is not so diligent when it comes to protecting the local businesses from shoplifters, thieves and homeless bums.

Of course, when Little Jackie learns about all this, he stops the women from using two of his men to collect the protection money and tries to attack Claire. However, Claire is saved because Kathy reached out to Claire’s old boyfriend, a shaggy hitman who had left town years ago. Little Jackie ends up dead, but that proves to be no problem because the women decide they can use Claire’s old boyfriend as their new enforcer. More violent mayhem and more plot twists follow.

Gangster movies of all kinds can be entertaining, and sometimes even uplifting. Once in a while, a gangster movie has a comical bent that can be even more entertaining, such as John Ford’s hilarious 1935 movie THE WHOLE TOWN’S TALKING, where Edward G. Robinson plays a mild mannered accountant and his look-alike double, a notorious gangster. THE KITCHEN has a few interesting moments that might also be considered entertaining, but overall it doesn’t fulfill the positive possibilities outlined in the first two sentences above.

In the first place, the movie follows the ultraviolent, foul-mouthed format of a Martin Scorsese gangster movie like GOODFELLOWS, but it’s not as polished. For example, although it’s filled with talented actors and some great music, the movie’s production values and direction result only in solid but not extremely impressive performances. We don’t think one can blame the actors entirely for this. It feels more likely that the first-time female director and her team weren’t given the support they should have had. Also, it probably would have been better if the director had cut her teeth on smaller independent movies and B movies like Scorsese did with BOXCAR BERTHA and MEAN STREETS. That was one of the great things about Old Hollywood, when a wannabe director could first cut their teeth by being a film editor and/or head a couple smaller pictures. Of course, there’s always an exception, such as Orson Welles doing CITIZEN KANE, but, to be fair, and accurate, Welles had already directed some stage productions and some radio and had the benefit of using the talents of a couple credited and uncredited co-writers, a great experienced cinematographer willing to experiment with the film medium, an experienced editor, and a great composer. The latter three men went on to create even more great movies and great soundtracks through the studio system. So, the first-time director of THE KITCHEN, Andrea Berloff, has some talent that could blossom into greatness in future movies and other productions.

In the second place, the great weakness of Martin Scorsese (which doesn’t seem to be true of Francis Ford Coppola, the director of the classic gangster movies about novelist Mario Puzo’s creation THE GODFATHER) is his strong reliance on using abundant foul language and graphic violence. The abundance of such content in his movies, and in THE KITCHEN too, diminishes the movie’s production values, entertainment values and artistic values. Great talent or great experience can sometimes ameliorate this problem, but not here.

Finally, besides the frequent foul language and graphic violence in THE KITCHEN, the movie also has a very strong Romantic, radical feminist worldview promoting lawless, hedonistic, immoral pagan values. [SPOILERS] Eventually, the lead female character says she just has to just look out for Number One because society and men always takes advantage of women sooner or later. In fact, at one point she says she can’t rely on a man or even on God like she used to do. Also, in another major scene, a few of her closest friends, her father and some members of her local community eventually support her and prevent her from getting killed because she’s done things for them, including also helping them get work (in the case of the local construction workers union). Furthermore, most of the local businesspeople don’t mind paying her and her two friends protection money because she and her friends willingly stopped other people from hurting them or stealing from their business in exchange for the money. Essentially, by the time the movie ends, it seems to celebrate gangsterism in the name of the lead character’s Romantic, radical feminist worldview.

THE KITCHEN is filled with so much selfish, hedonistic, lawless, immoral, and unbiblical behaviors and attitudes that it’s hard to calculate. The movie appears to endorse most, if not almost all, of this immorality. In addition, very few consequences are shown for such evil. In fact, the biggest negative consequence in the whole movie seems to be an incident or two where a character is too kind to another person! No good deed goes unpunished, apparently.

Needless to say, for all these reasons and more, THE KITCHEN must be considered abhorrent and totally unacceptable.