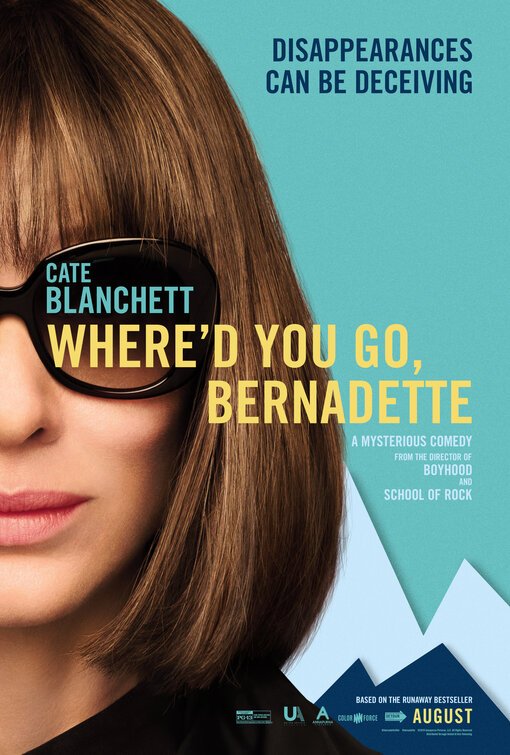 In WHERE’D YOU GO, BERNADETTE, Bernadette lives in Seattle with her husband, Elgin, and teenage daughter, Bee. Previously in Los Angeles, Bernadette was an acclaimed architect, but something happened that sent her spiraling down into a black hole of depression for 20 years. Now, Bee’s just been accepted into a great prep school. She wants the family to go on a celebratory cruise to Antarctica, but Bernadette doesn’t want to go. Before, Bernadette solved her problems by disappearing. That’s what she does now, and her family has no choice but to go find her.

This movie tells an endearing story of a family that, despite their hardships, truly loves each other. The two-hour movie goes by in a flash. There isn’t a moment that’s not entertaining, and Cate Blanchett portrays the neurotic Bernadette with lots of grace. The movie has a strong Romantic worldview, however. The solution to people’s problems is found in creative expression rather than in God. WHERE’D YOU GO, BERNADETTE also has an excessive amount of foul language, brief drug references, and examples of dysfunctional behavior. So, MOVIEGUIDE® advises extreme caution.

(RoRo, B, LLL, V, A, DD, MM):
Dominant Worldview and Other Worldview Content/Elements:
Strong Romantic worldview where the solution to the main character’s anxiety and depression is to create and be an artist, no one looks to God or biblical values for guidance but go to therapists, medicines, etc., and eventually find the answer in creativity and being able to express oneself artistically, with some positive family content (the family members in the movie clearly love one another)
Foul Language:
13 obscenities (including two “f” words), one strong JC profanity, 17 light profanities, and a woman describes what her toilet looked like after miscarriages
Violence:
A small mudslide damages a house, a locked door is kicked open, and a character seems to pretend a car ran over her foot
Sex:
No sexual content
Nudity:
No nudity
Alcohol Use:
Characters have an alcoholic beverage at a school event, and two women have drinks together on a ship
Smoking and/or Drug Use and Abuse:
Teenagers are shown smoking vape pens, it’s mentioned that a woman’s son is using marijuana although it’s not shown, a woman asks her assistant for “something strong” to take to deal with motion sickness, references to psychiatric drugs for anxiety and depression, and a teenage girl jokes to her friend about Ritalin;
Miscellaneous Immorality:
Strong miscellaneous immorality and issues such as examples of a dysfunctional marriage and family as a daughter favors her mother and is disrespectful to her father multiple times, another woman is portrayed as a single mother and has disciplinary issues with her son (including him using marijuana), a few examples of lying and deception, two neighbors exchange gossip about title character, a woman fakes being run over to sabotage the reputation of someone else.