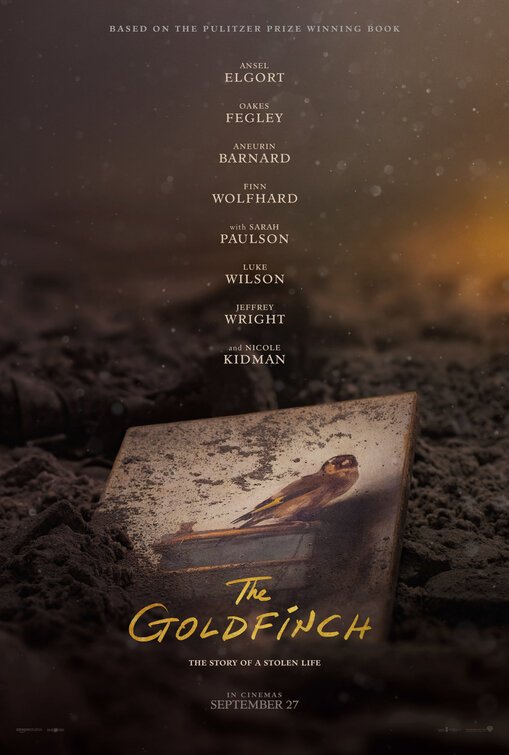 THE GOLDFINCH is based on a Pulitzer Prize winning novel. In the drama, told with flashbacks, the life of a 13-year-old upper crust New York City boy named Theo is upended when his mother’s killed in a terrorist bombing at a museum. During the chaos, Theo steals a priceless painting called “The Goldfinch.” Theo keeps the painting hidden in a yellow bag for years, even when he’s taken in by rich family friends. One day, his father, who abandoned Theo when he was young, drags him to Las Vegas. Theo’s dad has a terrible gambling problem and exploits Theo’s inheritance from the mother. Meanwhile, Theo befriends Boris, a Russian boy who introduces Theo to drugs and alcohol.

THE GOLDFINCH has an unpredictable plot, but its randomness is a detriment more than an asset. Eventually, a final plot twist occurs where something good comes out of all the bad. This conclusion is somewhat fatalistic, however. THE GOLDFINCH also has some strong foul language and a casual attitude toward the story’s illicit drug use. The movie’s plot is too convoluted to be truly engaging.

(PaPa, RoRo, H, B, Ho, LLL, VV, S, N, AA, DDD, MM):
Dominant Worldview and Other Worldview Content/Elements:
Strong mixed pagan worldview with strong Romantic elements, some implied humanist content about fate and some light moral elements, plus a young teenage boy kisses another boy on the lips when they part ways, but the other by is shocked and nothing comes of it later when they meet again as young adults
Foul Language:
22 obscenities (mostly “f” words), one GD and a light profanity
Violence:
Repeated flashbacks of a bomb exploding inside a crowded museum, and the smoke clouds cover people as they are killed or flee, a gunfight ends with a couple people shot or killed, a young man contemplates suicide, a father is seen punching his teenage son once and then kicking him and hitting him with a cane as he lies on a floor, and another teenage boy is slapped hard in the face by his father twice and by another adult another time (the slaps are extremely jarring and disturbing)
Sex:
No sex, but two 13-year-old boys are seen huddling in a bed together when one experiences traumatic nightmares dealing with his mother’s death in a terrorist explosion, the boy with nightmares is straight and never expresses any homosexual desire, but the other boy is gradually implied to have romantic feelings for the boy with the nightmares and kisses the other boy on the lips briefly when they part ways, but this is seen as a complete shock to the boy with the nightmares, who’s heterosexual, and nothing comes of this later when the two boys meet again as adults
Nudity:
A man is briefly seen shirtless while preparing himself for the day in a bathroom
Alcohol Use:
Alcohol use includes underage drinking when two 13-year-old boys drink beers
Smoking and/or Drug Use and Abuse:
The main character, both as an adult and especially as a young teenagers with another boy, is seen trying all sorts of illicit pills and even snorting them after they are ground into powder, the main character is seen taking drugs repeatedly throughout the movie without any major consequences, and the two 13-year-old boys are seen taking LSD acid and snorting pills; and,
Miscellaneous Immorality:
Movie tells the story of a 13-year-old boy who takes advantage of the shock and chaos when a museum is bombed and his mother dies, and he steals a priceless painting, lies and deception are key plot points, and an engaged woman is overseen kissing a different man than her fiancé, then first lies about the kiss and then asks the fiancé to look the other way and have an arranged marriage where they can each see other people, but he rejects the idea, yet is left in emotional limbo when a woman he loves even more refuses to move to New York City and be near him.

THE GOLDFINCH is the story of a 13-year-old upper crust boy whose life is upended when his mother is killed in a terrorist attack at the Metropolitan Museum of Art and he steals a priceless painting called “The Goldfinch” during the post-bombing chaos. THE GOLDFINCH is too convoluted to be truly engaging, has strong foul language and lots of drug use, and its lightly positive conclusion is too fatalistic to be truly uplifting.

The movie in Amsterdam as a 21-year-old man contemplates suicide and looks back on what led him to this position. Cut to eight years before, where a 13-year-old New York City boy named Theo (Oakes Fegley) is admiring classic artworks at the Metropolitan Museum of Art when a bomb explodes and kills his mother in another room. Picking himself up from the rubble amid dust and mass chaos of dead bodies and people running, Theo is given an expensive ring by a dying old man and told to take it to a particular antique shop.

As Theo flees with the ring, he sees a small priceless painting called “The Goldfinch” hanging on the wall and steals it, placing it under his jacket. He keeps it hidden in a yellow bag for years, first when he’s taken in by rich family friends headed by Mrs. Barbour (Nicole Kidman).

Theo adjusts slowly to his new life with the Barbours. One day, however, his father (Luke Wilson), who abandoned him and his mother when Theo was young, returns to claim him and move him to Las Vegas. Theo’s dad has a terrible gambling problem and soon exploits the money Theo inherited from his mother. Meanwhile, Theo becomes extremely close friends with a Russian immigrant boy named Boris (Finn Wolfhard), who has access to all sorts of illicit pills and LSD.

The two boys experiment with the drugs and drinking beer through all sorts of bad experiences that befall them. However, one night a surprise tragedy hits, and Theo feels the need to run away back to New York. Boris stuns him by revealing his love for him, and by saying he can’t follow Theo on his cross-country flight.

Theo winds up staying with an antique dealer (Jeffrey Wright) for years, having met the man when he brought him the ring that the old man gave him. However, when the story jumps to follow Theo (Ansel Elgort) in his early 20s, where his drug use, art theft and other dark aspects of his past come back to haunt him.

THE GOLDFINCH is based on a bestselling, Pulitzer Prize-winning novel by Donna Tartt that was a sprawling near-800 pages in length. The movie is also a sprawling tale, packed into two and a half hours and still feeling like it skips around too much at times. While the movie is sumptuous to look at in its portrayal of upper-crust New York life, and many of the performances are strong (particularly Jeffrey Wright and Ansel Elgort), the story is so convoluted it’s hard to follow at times and just as hard to care about what happens to the characters.

As the young Theo who is expected to carry much of the movie, Oakes Fegley is solid but his character boxes in his emotions so much that it’s hard for him to display much range. Elgort is better as the adult Theo, particularly in a heartbreaking scene where he tries and fails to win the heart of the woman he truly loves while facing a loveless, basically arranged marriage to another woman.

Perhaps, the most annoying aspect of the tale is its far too casual attitude towards illicit drug use, particularly the fact that it’s being carried out by tweens. There are few if any consequences to their use, which makes the characters who use them unsympathetic.

THE GOLDFINCH has a plot that’s largely unpredictable, but its randomness winds up being a detriment more than an asset. Eventually, a final plot twist occurs where something good comes out of all the bad that Theo and his teenage friend, Boris, do. This leads Boris to tell Theo that good can come from bad. Despite this conclusion, there’s nothing spiritual about it, so the conclusion comes across as rather humanist.

Ultimately, THE GOLDFINCH is too convoluted to be truly engaging, and the positive conclusion is too fatalistic to attract many moviegoers, especially media-wise viewers.