"May You Meet Your Redeemer Face to Face" 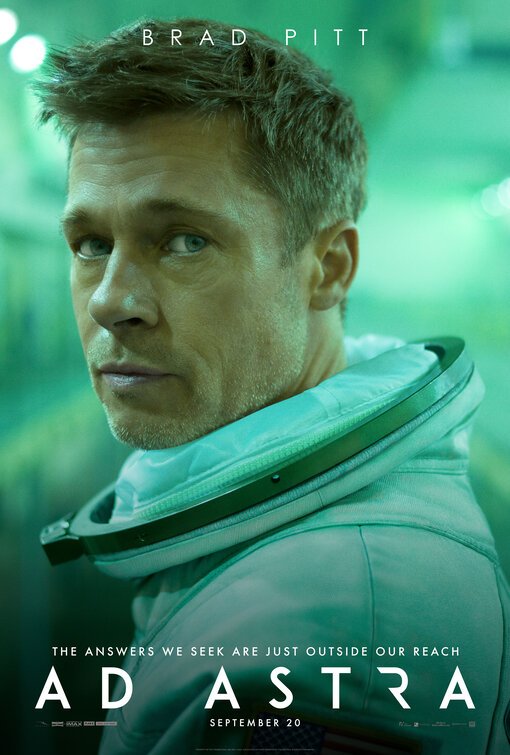 Posted by Movieguide on Thursday, September 19, 2019

AD ASTRA is a space adventure set in the future. Astronaut Roy McBride is assigned to a special mission after strange power surges threaten Earth. The government believes the power surges come from a mission near Neptune, spearheaded by Roy’s father 30 years ago. They send Roy to Mars to transmit a message, hoping his father will respond. However, Roy becomes emotionally involved, so he’s deemed unfit to continue. Roy manages to sneak aboard the spaceship to Neptune. Can Roy find his father and save the world?

AD ASTRA provides a slight twist to the usual hero’s journey, but it’s highly entertaining and redemptive. Unlike other space adventures, the calmness in the characters highlights the stressful moments they face. The future society is also portrayed in a unique way, making the story riveting and unpredictable. AD ASTRA has a strong moral worldview with many positive Christian elements, including prayer, self-sacrifice and overt themes regarding the revelation of God in nature and space. AD ASTRA has some strong foul language, however, and some disturbing and bloody images. So, MOVIEGUIDE® advises strong caution.

(BBB, CC, LL, VVV, N, DD, M):
Dominant Worldview and Other Worldview Content/Elements:
Very strong biblical, moral worldview throughout with strong Christian elements as well, a man expresses how overwhelmed he is at seeing and feeling God’s presence so close while he is working in space, an astronaut prays “may you meet your redeemer face to face and enjoy the vision of God” after another astronaut tragically dies, there are overt themes regarding the revelation of God in nature and space, major themes of self-sacrifice for the greater good of mankind, a man does disobey orders but does so in order to save more lives and the entire planet Earth, plus some may be bothered by one prayer when a character directly prays to St. Christopher rather than to God, making this character distinctly Catholic
Foul Language:
Nine obscenities (including one “f” word) and 4 GDs, as well as one example of the middle finger as a joke
Violence:
Lots of very strong and strong violence incudes disturbing and bloody images, astronauts fall from an extremely high structure but it’s unknown if they survive as they have parachutes, one man crash lands, and it’s implied he’s injured, but it’s not shown, one scene involving an exchange of gunfire and rover crashes on the moon resulting in a few fatalities, a rogue monkey attacks an astronaut eating his face and arm showing that his nose was eaten off and has a bloody nub for what remains of his arm, a monkey explodes in front of a glass showing a burst of blood, a woman flies through a spaceship upon a jolt and crashes into a window headfirst to her death, a few astronauts are shown suffocating due to lack of oxygen in the spaceship, small wrestling match involving a knife but no contact or blood, a few deceased astronauts are shown floating around some with plastic bags over their heads covering up what looks like a burst head or something of that sort and appears to be rather disturbing, some blood shown on spaceship wall, and one large explosion
Sex:
No sexual content
Nudity:
Upper male nudity shown in a medical check-up
Alcohol Use:
No alcohol use
Smoking and/or Drug Use and Abuse:
No smoking, but the captain of a ship passes out “mood stabilizers” that the main character decides not to take and it appears to make the others a little loopy; and,
Miscellaneous Immorality:
Elements of a bad role model as well as family dysfunction as a father abandons his family to pursue his research, a marriage falls apart due to the husband’s extreme commitment to his work, the government is portrayed as minorly corrupt and deceptive, government covers up a story in order to save face, main character directly disobeys orders from his superiors.

Roy McBride works on a space station thousands of miles above the Earth’s surface. One day, as he performs routine maintenance work with a few colleagues, there’s suddenly a burst of power surging throughout the station, causing Roy and others to be thrown off the station. Roy falls hundreds of thousands of feet through the atmosphere, finally being able to stabilize himself enough to pull his parachute and crash land onto the ground.

Soon after this event, Roy’s summoned to a top secret government meeting. Being the son of the legendary astronaut Clifford McBride, he’s informed of some new information regarding these strange power surges. They’ve been happening all over the world and they are predicting that it’s only going to get worse. These officials inform Roy there’s reason to believe his father is still alive near Neptune, where he was sent 30 years ago. They think the power surges are coming from his father’s last mission, called Project Lima. Now, Roy is being sent to Mars in order to transmit a message out in hopes his father will respond. He is to fly commercially to the moon, in order to avoid any suspicion from the public or media, and then catch a ride to Mars.

The base on the Moon appears to be more of a shopping mall, complete with Applebee’s, Yoshinoya’s and costumed aliens taking pictures with people’s children. However, outside the base a war is raging. Pirates have been attacking the rovers, stealing equipment and killing the occupants. As Roy and his companions try to make their way to the Mars bound vessel, they soon find themselves with unwanted company. Shots are fired and rovers crash into each other. Roy and his fellow captain make it to the ship, but lose one of their lieutenants.

Finally on the way to Mars, Roy sneaks away from the others to listen to the classified information he was given for his top secret mission. Suddenly, they receive a mayday call from a nearby space station. After a short disagreement about whether or not to respond to this, Roy agrees to assist the captain in boarding the other vessel. This place is a station for animal research, and there is not one soul to be found on board. Separating from each other to search, Roy soon finds his comrade again being attacked by loose, rogue monkeys. Desperately trying to escape these beasts, Roy takes the captain’s helmet and returns to their ship. The crew say a prayer over the deceased captain and send him out into space.

Upon arrival to Mars, things begin to take a turn for Roy. He is placed in a recording studio and told to read a message that will be sent out, in hopes his father will respond. However, when it seems they might have received a response, Roy’s suddenly deemed unfit to continue this mission and is told he will soon return to Earth.

Later, Roy’s approached by a woman whose parents were also on the Lima project, and she tells him things that the government never would. He knows what he has to do. She helps him sneak on to the Neptune bound ship. Roy has a new personal mission: To find his father and stop these power surges from destroying life as we know it.