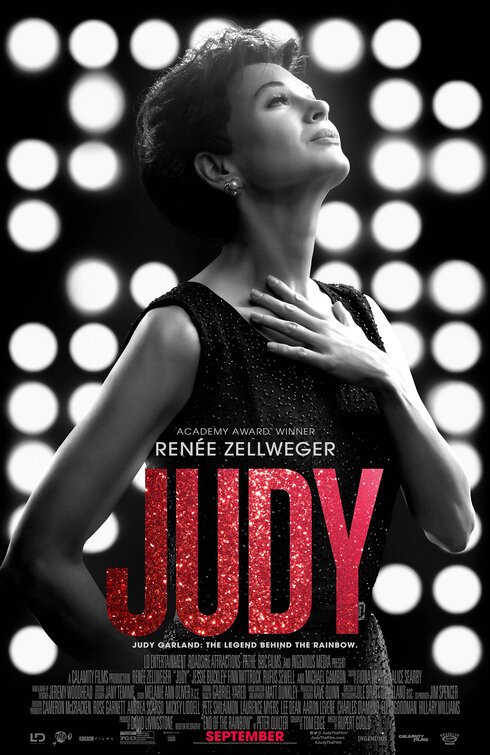 JUDY follows the life and career of Judy Garland. Judy is with her two youngest children while performing in Los Angeles for very little in the mid 1960s. Judy’s in her forties and has performed all over the world after achieving great success as a movie star in the 1930s and 40s. The older Judy can’t seem handle her financial situation, however. She doesn’t even have a home for her children to return to at night. Sid Luft, her most recent ex-husband, tells Judy he’s going to fight for custody of their children. Judy becomes distraught and decides to perform in England to get money to fight for custody.

JUDY is well-produced, with an amazing performance by Renee Zellweger. She perfectly captures Judy’s mannerisms. JUDY has a strong Romantic worldview of someone chasing fame. It shows a positive longing for being a mother, but Judy seems more focused on her fame than on her children. JUDY also has some foul language and references to male homosexuality and to the substance abuse that eventually killed Judy Garland. MOVIEGUIDE® advises extreme caution for JUDY.

(RoRo, B, HoHo, RH, LL, V, S, N, AA, DD, M):
Dominant Worldview and Other Worldview Content/Elements:
Romantic worldview about fame and, though it does show the shortcomings of fame and not being happy, movie doesn’t point to any hopeful resolution, a male homosexual couple fights for their rights, and two men are shown living together, and some suspicious revisionist history that contends Judy Garland sought fame above everything else, which doesn’t seem fair to her troubled history of abuse by her mother and the major movie studio where she found her biggest success
Foul Language:
13 obscenities (including two “f” words) and four profanities
Violence:
Judy falls over a couple of times
Sex:
Implied extramarital sex, main character married five times, and two men are shown living with each other
Nudity:
Upper male nudity
Alcohol Use:
Alcohol use and drunkenness
Smoking and/or Drug Use and Abuse:
Smoking and prescription drug abuse; and,
Miscellaneous Immorality:
dramatic revision of history, poor portrayal of motherhood, and abuse.

JUDY follows the life and career of Judy Garland. JUDY has a Romantic worldview and shows the tragic ending of Judy Garland’s life due to her addiction to prescription drugs and custody battle for her children.

JUDY starts with Judy Garland and her two youngest children performing in Los Angeles in the 1960s for a low fee. At this point, Judy is in her forties and has performed all over the world after her great success as a child actress and a singing star in many classic musical films. Judy also can’t seem to get a handle on her financial situation. As a result, she doesn’t even own or rent a home for her children to come back to at night. After being refused by a hotel, Judy decides to drop her children off at her ex-husband, Sid Luft’s, house. Sid lives in a beautiful house and welcomes the children, but not Judy.

Meanwhile, Judy heads out, late at night, to a party with her oldest daughter, Liza, who’s the child of another former husband, Vincente Minnelli. Not long after she arrives, a man named Mickey comes up to her and tells her she’s the greatest performer in the world. Of course, Judy, who’s intrinsically insecure, feels wonderful after he says this and decides to talk with him all night long.

The next day, Sid reveals to Judy he wants to have full custody of the children, because she can’t offer them any stability, much less a home. Judy gets distraught and tells the children she will fight for them by going to England to perform and make money.

Judy arrives in England and is greeted by lots of fans and paparazzi. This is the type of treatment she adores. When she’s supposed to go rehearse and hears the theater fits thousands, she walks out. Will she actually be able to do a powerful performance for that many people? Does she have it in her? These are all the questions in her head and she must overcome them in order to make money and be able to pay to fight for her children in the custody battle.

JUDY is well produced, with an amazing performance by Renee Zellweger. Renee truly captures the mannerisms and likeness of Judy Garland. The costuming and makeup is also excellent. The movie is structured well and has a strong plot line. Despite this, the movie does have some flashbacks to when Judy Garland was younger. The actors in the flashbacks seem to be over acting, Thus, the flashbacks seem a little forced. In fact, the movie opens with a flashback, a long monologue by Louis B. Mayer, the head of MGM Studios when Judy made all her great musicals. This scene could have been entirely removed because the audience is not yet, at that point, emotionally invested enough for a monologue.

JUDY has a strong Romantic worldview of someone who is chasing fame. The movie shows a positive longing for motherhood and being a mother, even though the character herself was not focused on her children, but rather fame. Also, there are some sort of agenda related causes in the movie, including a suggestion of Louis B. Mayer coming onto Judy and a homosexual couple’s storyline of rejection. It is not certain if those events did or did not happen, though in one memoir of Judy Garland’s, “Get Happy: The Life of Judy Garland,” it does promote the idea that Louis B. Mayer took advantage of Judy. This, of course, could have led to her insecurity and push for fame.

Overall, however, JUDY is a morality tale about fame, showing that someone who has the highest level of recognition is not happy. Though this is so, the movie doesn’t show a glimpse of hope found through Jesus or a suggestion of redemption. Rather, it depicts an unhappy person, addicted to prescription drugs, who’s willing to do almost anything for fame.

Though it seems clear that Judy Garland was an insecure, needy person who craved love and attention, MOVIEGUIDE® doesn’t buy the conclusion that seeking fame was what drove her. Everyone needs love and attention, and fame can be a substitute to satisfy that need. Also, Judy suffered a lot of abuse from studio executives, who falsely thought she was unattractive and forced her to maintain a super-thin figure by feeding her drugs and denying her food to maintain her weight. They also gave her drugs to have enough energy for the long hours of rehearsal and filming, and drugs to calm her down. Judy was also allegedly emotionally abused by her mother, who’s been described as one of the worst stage mothers in vaudeville, where Judy started her child career. Judy’s daughter, Liza, allegedly reported that her mother had terrible mood swings, being extremely ecstatic one moment and extremely sad the next. According to Judy’s former husband, Sid Lift, Judy tried to commit suicide 20 times (Christine-Marie Liwag Dixon, “The tragic, real-life story of Judy Garland,” https://www.thelist.com/112485/tragic-real-life-story-judy-garland/).