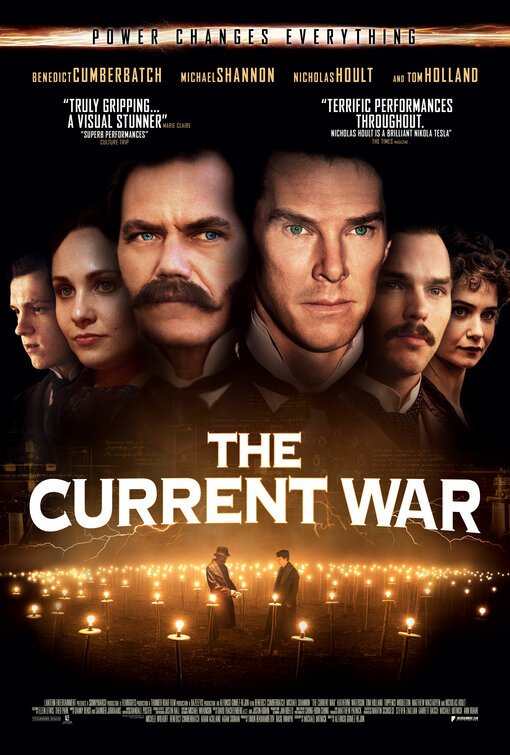 Sparks Fly and Egos Clash in THE CURRENT WAR

THE CURRENT WAR is a man versus himself period drama about the public fight between Thomas Edison and George Westinghouse in the late 1800s about who had the safest, most efficient electrical system for America’s future

THE CURRENT WAR is a man versus himself period drama about the public fight between Thomas Edison and George Westinghouse in the late 1800s about who had the safest, most efficient electrical system for America’s future. Westinghouse is ready to team up with Edison on providing electricity to the whole country, but Edison is partial to his Direct Current, or one-way, system while Westinghouse believes in AC, or Alternating Current. At one point, Edison hires Nikola Tesla to improve his DC system, but reneges on a deal for more money. Soon, Westinghouse hires Tesla for his AC system, but Edison compromises his principles by exaggerating to the press and the public about how dangerous AC can be.

THE CURRENT WAR is very well acted and often absorbing, but it’s a little too subtle and dispassionate. Period dramas often tend to be slow-moving dramas of course, and this problem keeps THE CURRENT WAR from becoming a great four-star movie. THE CURRENT WAR also ends on a humanist note and contains some brief foul language. So, MOVIEGUIDE® advises caution for older children.

(B, H, L, V, DD, M):
Dominant Worldview and Other Worldview Content/Elements:
Light morality tale about two men in conflict where they are tempted to compromise their own principles in order to win a fight over modern technology
Foul Language:
Four “d” obscenities, three strong profanities, two light profanities, and one borderline profanity “for the love of God”
Violence:
Talk about using electricity to electrocute a man for murdering his wife, talk about electrocuting a horse to death, it’s implied a man is killed by electricity when the lights in a machine making house suddenly go out, and a woman dies of illness, perhaps brought on by use of a medicinal morphine concoction
Sex:
No sex
Nudity:
No nudity
Alcohol Use:
No alcohol use
Smoking and/or Drug Use and Abuse:
Cigar smoking, and a woman is prescribed a medicinal morphine concoction which may have also brought on her death unintentionally; and,
Miscellaneous Immorality:
Man steals secret papers, man slanders another man, man reneges on an offer he made to a man working for him.

THE CURRENT WAR is a man versus himself period drama about the public fight between Thomas Edison and George Westinghouse in the late 1800s about who had the best, safest electrical system for America’s future. THE CURRENT WAR is an engaging, well-acted drama that’s generally historically accurate, but the movie is a little too subtle and dispassionate and contains some humanist elements and foul language.

The movie opens with Thomas Edison demonstrating to the press and potential donors his system for delivering electrical lighting to cities across the country. Cut to Edison, his family and Edison’s biggest financier, the powerful J.P. Morgan, meeting the president of the United States.

On the way back from the White House, Edison’s train is supposed to stop to pick up the great inventor George Westinghouse and his wife, Marguerite, for a dinner with them at Westinghouse’s home. However, Edison is too tired for the train to stop, and he snubs the rival inventor.

It soon becomes clear that Westinghouse is ready to team up with Edison on providing electricity to the whole country, but Edison is partial to his Direct Current, or one-way, system while Westinghouse believes in AC, or Alternating Current. In Direct Current, the electrons providing the energy flow in a single direction through a wire, or forward. In Alternating Current, the electrons providing the energy keep switching directions in the wire, sometimes flowing forward and sometimes slowing the other way, or backward. AC is a more powerful, and cheaper, way to transmit electricity across long distances, but it can also be more dangerous. Edison doesn’t want any of his inventions to harm anyone, so he’s cautious to a fault. Westinghouse disagrees and thinks Edison is exaggerating the dangers.

Eventually, Westinghouse and Tesla compete with Edison for a contract to light the 1893 World’s Fair in Chicago.

THE CURRENT WAR is very well acted. Benedict Cumberbatch plays Thomas Edison as a driven, idealistic man who loves his wife and children but often neglects them for his work. Edison is upset because he thinks Westinghouse is stealing his electric lightbulb invention. Michael Shannon plays George Westinghouse as a determined but compassionate visionary who’s able to set aside his ego for the bigger picture. Westinghouse knows Edison is wrong about Alternating Current, but when Edison turns their business disagreement into a personal conflict and tries to damage his reputation, he’s tempted to fight fire with fire.

One problem with the movie is that the character of Nikola Tesla almost seems to be an afterthought in the story. While it’s true that Tesla’s support for Alternating Current was part of the reason for Tesla leaving Edison’s employ and a big reason Westinghouse hired Tessla to perfect his alternating current system and get the World’s Fair contract, at one point, Tesla’s character just disappears from the movie.

Also, THE CURRENT WAR is too much of a character study and not enough of a drama. The movie has several moving scenes, but it’s often too subtle and dispassionate for its own good. Period dramas often tend to be slow-moving dramas, and this problem keeps THE CURRENT WAR from becoming a great four-star movie.

In one sense, THE CURRENT WAR is a tragedy. On the one hand, the Edison portrayed in the movie is a man of principle and high ideals. He truly wants to help other people with his inventions, and that’s a major reason he’s really committed to his Direct Current system. On the other hand, his principles and ideals are so tied to his own ego that he’s stubbornly unwilling to see that his system is not the best thing for the people he wants to help. Edison is also upset Westinghouse, and others, are using his idea for the electric light filament to compete with him directly. In the end, George Westinghouse is not really Edison’s enemy; it is Edison himself who is the enemy, not only of Edison but also of the good things Edison wants to do.

At the end, Tesla makes a short speech about ideas being eternal and pointing the way to the future, but his speech overtly discounts the notion that God plays any role in this. So, although THE CURRENT WAR is somewhat of a morality tale, MOVIEGUIDE® advises caution for older children for this humanist element and for some brief foul language.