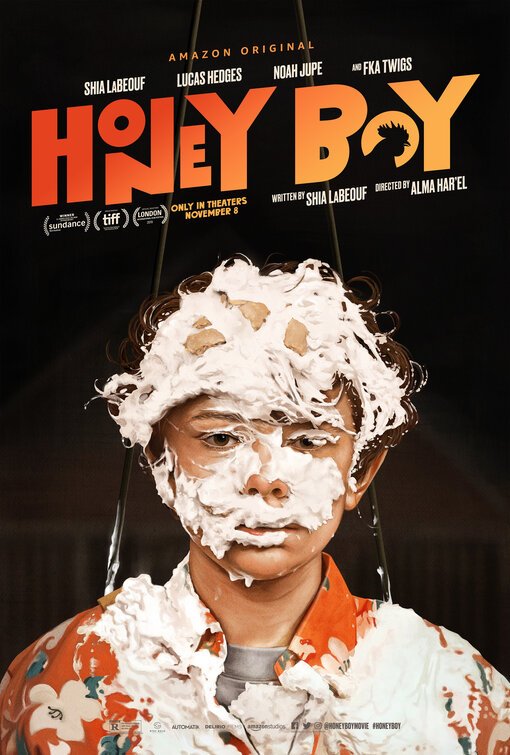 HONEY BOY is a drama about the abusive behavior by a father to his 12-year-old son, a child actor. At 22, Otis is forced to enter rehab after getting his third DUI. A female therapist makes Otis deal with his mixed feelings toward his father, James. The adult Otis recalls his traumatic experiences at age 12, when he hired his father to chaperone him during a series of acting jobs as a child actor. This unusual father-son relationship leads to a lot of bitterness and emotional abuse by James toward Otis, who develops a love-hate relationship with his dad.

HONEY BOY is based on the real-life troubles of Actor Shia LaBeouf, who wrote the screenplay and plays a character based on his father. The movie could have been hopelessly depressing, but it manages to be a touching but raw portrait of a sad childhood and its adult consequences. The acting is superb, especially Shia’s performance as the troubled father. However, HONEY BOY is marred by abundant foul language, crude sexual dialogue and a scene where the father smokes marijuana with his 12-year-old son.

(PaPa, C, Ro, Ab, LLL, V, SS, AA, DD, M):
Dominant Worldview and Other Worldview Content/Elements:
Mixed pagan worldview in a story about a young man’s troubled relationship with his abusive father, with a mixed Christian, Romantic attitude toward substance abuse rehab includes references to Alcoholics Anonymous, forgiveness is eventually extolled, father expresses belief in God at one point and rebukes a fellow AA member who says he doesn’t believe in God or the higher power teachings of AA and never found that part of the AA program to be helpful, and young man is encouraged to express his feelings about his father, which he does by writing in a journal when his rehab experiences dredge up bad memories of being emotionally abused by his father
Foul Language:
At least 162 obscenities (including many “f” words), four strong profanities and three light profanities
Violence:
Emotionally abusive father slaps his 12-year-old son hard three times in one scene, a young man is seen arguing with and swearing at police while trying to resist arrest, father grabs another man serving as a Big Brother mentor to his son and throws him fully clothed into a swimming pool while taunting him obscenely
Sex:
Crude sexual dialogue from abusive father, references are made to the fact that the father is a registered sex offender who as a teenager had tried to assault a teenage girl in a car years ago (the girl managed to jump out of the car), father makes salacious gestures to a young woman who rebuffs him, and boy befriends a young female sex worker who holds the by when he’s upset and later she wraps her arms around him in bed and they fall asleep but nothing happens between them
Nudity:
Partial rear female nudity when father visits a strip club and some female cleavage and upper male nudity
Alcohol Use:
Alcohol use and drunkenness, and father explains to his son at one point that he comes from a long line of alcoholics, and son is forced into rehab for the third time when he crashes his car and is arrested
Smoking and/or Drug Use and Abuse:
Lots of smoking, implied drug abuse in one scene, and father and pre-teen son smoke marijuana in one scene; and,
Miscellaneous Immorality:
Father who’s taking care of his son while the son acts in TV and movies emotionally abuses and sometimes mocks son, son talks back to father, and father and son have uncomfortable arguments because son’s acting career pays the father’s salary, which leads to father slapping boy at one point.

HONEY BOY is a drama set in the entertainment industry about the abusive behavior by a father to his 12-year-old son, a child actor, and the son’s slow recovery from that trauma at age 22 in rehab. Based on the real-life troubles of Actor Shia LaBeouf, who wrote the screenplay and portrays a character based on his own father, HONEY BOY ends on a touching note of reconciliation, but it contains abundant foul language, some crude sexual dialogue and marijuana use.

The movie opens on a disconcerting image. A 12-year-old actor named Otis Lort (Noah Jupe) gets a pie thrown in his face in slow motion before being flung into the air by a rope, while acting on a television studio set. The movie then jumps to a jarring series of drunken episodes by the 22-year-old Otis, leading to a devastating crash due to his drunk driving.

Since he has a string of arrests for drunken behavior, Otis is ordered to a rehab program to break his addiction to alcohol and get control of his emotions. As the adult Otis faces his troubled emotions, he recalls memories of his childhood a decade before, where Otis lives in a cheap motel with his father, James (Shia LaBeouf), while James escorts Otis to a string of acting roles.

James is a troubled man, with no ability to find work other than driving and “managing” his son’s career. In fact, James was arrested many years ago as a teenage sex offender for kidnapping and trying to assault a teenage girl, who jumped out of a moving car. Consequently, James is only able to make money by Otis paying him through his acting jobs. Meanwhile, the boy’s mother is only heard in a series of long-distance phone calls.

This unusual father-son relationship leads to a lot of bitterness and emotional abuse by James toward Otis, who constantly works or learns his lines for the next day. A young sex worker living at the motel across the way befriends Otis. Otis doesn’t act on his feelings other than her holding him one time to give him some affection and one night when they sleep next to each other in a bed.

As the adult Otis (Lucas Hedges) confronts his past via writing in a journal and yelling in the middle of a forest, he starts to achieve peace. The movie also shows a greater understanding of what made his father such a troubled man.

This story may sound like a hopelessly depressing time at the movies, but somehow HONEY BOY manages to be a touching but raw portrait of a sad childhood and its adult consequences. The movie’s ending shows that proper counseling and expression of emotions can help troubled people find some peace and forgiveness.

HONEY BOY doesn’t show James or Otis directly engaging with God, but James attends AA meetings. In one scene, James confronts one of his fellow AA members when the man says he doesn’t believe in God or a “Higher Power.”

While playing the father, Shia LaBoeuf delivers a truly moving performance in what had to be an incredibly difficult circumstance of not only forgiving his father, but using his art to bring empathy to a man he could have easily simply mocked and hated. Noah Jupe and Lucas Hedges as the young and adult Otis both deliver powerful performances as well. Jupe delivers a heartbreakingly vulnerable portrait of a child who feels there’s no way out of his tough situation. Hedges displays the gradual relief and change that comes from his character finding the people who will help him confront his personal demons. The result of all this is a movie that’s a remarkably open portrait of pain and reconciliation. That said, HONEY BOY is marred by abundant foul language, crude sexual dialogue and a scene where the father smokes marijuana with his 12-year-old son.