CREATED EQUAL: CLARENCE THOMAS IN HIS OWN WORDS 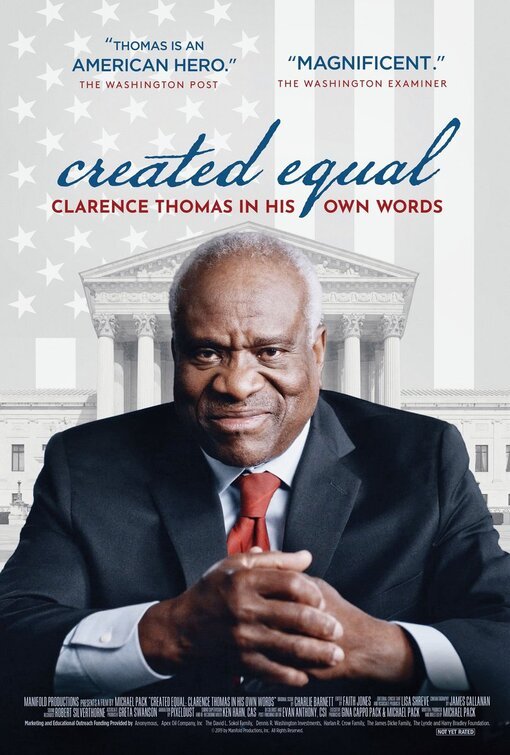 CREATED EQUAL: CLARENCE THOMAS IN HIS OWN WORDS is a fascinating documentary where inSupreme Court Justice Clarence Thomas discusses his life, his triumphs and his challenges. Clarence grows up in an extremely poor rural home in Georgia. The house burns to the ground, so he lives in a shanty town in Savannah. By the Grace of God working through his grandparents, Clarence overcomes racism, finds God and excels at education to eventually get a law degree from Yale University. After working for President Reagan, he gets appointed to the Supreme Court. However, during his Senate confirmation hearings, he encounters more hatred and cruelty than he ever did from the racist groups in the Old South. Clarence’s reflections on his past are shown in scenes from newsreels, pictures and on location filming.

(CCC, BBB, L, V, S, AA, M):
Dominant Worldview and Other Worldview Content/Elements:
Very strong Christian worldview about a man growing up in extreme poverty who is grounded in the Catholic Church but rebels and becomes of Marxist because of racism but then is radically changed by faith, which changes his entire worldview and ideology, with many references to God, faith, miracles, morality, and doing the right thing
Foul Language:
Four obscenities related to sex in Senate testimonies, and several racist comments including calling a person an Uncle Tom
Violence:
Black Power marches with police brutality and footage of the Selma marches too with police brutality as well as references to lynchings and severe discipline
Sex:
Discussions of sexual abuse in Senate testimony
Nudity:
No nudity
Alcohol Use:
Discussions of alcohol abuse when racially harassed, and people get drunk when they march on Harvard and talk about getting drunk in college
Smoking and/or Drug Use and Abuse:
No smoking or drugs; and,
Miscellaneous Immorality:
Egregious Senate Democrat and fake news attacks become so vile and vicious that Justice Thomas calls them a lynching.

CREATED EQUAL: CLARENCE THOMAS IN HIS OWN WORDS is a fascinating documentary about a black man who grows up in an extremely poor rural home in Georgia, which burns to the ground, so his mother moves him and his brother and sister to a shanty town in Savannah, and, by the Grace of God working through his grandparents, he finds God and excels at education to become a Supreme Court Justice. Clarence’s reflections on his past are shown in scenes from newsreels, pictures and on location filming.

Born in a tiny coastal town surrounded by swamps and wetlands called Pinpoint, Georgia in 1948, Clarence is one of three children whose father abandoned the family. The father left the family when he was so young that Clarence can’t remember him. His mother said he was too stubborn to cry.

One day, he comes home to find their shack has burned to the ground. His mother moves the family to a shanty town in Savannah with a common outhouse when segregation of whites and blacks is still the policy in the South. Clarence said that period of his life was Hell, adding that everything around the shanty town is gross with the smell of sewage.

When Clarence’s mother realizes she can’t take care of him and his brother, she gives them to her parents to take care of them. They take everything they have in a little paper bag to their grandparents’ house. Their grandparents live in a fairly modern little house. His grandfather, Myers, drives a fuel truck and is a stern disciplinarian who doesn’t believe in excuses and expects perfection. His grandmother is loving and gentle. During the summer, they work on the small farm that’s been in the family for generations. Again, the grandfather expects perfection.

Since the public schools are so bad, his grandparents send Clarence to Catholic school. Clarence faces racism, but not from the nuns, who don’t like the state’s separate but equal policy and treat him well, realizing that he’s brilliant. He loves contemplation, prayer, church, and Gregorian chants, so, as a teenager, he goes to seminary, where again he faces extreme racism.

One day, he returns to his dorm, where one of the white students says that Martin Luther King, Jr., has been shot, and he hopes King dies. Previously, he had received an anonymous note with the Rev. King’s name on the front, with a message inside saying, “We hope he dies.”

Clarence realizes he doesn’t have any way of fitting into the white world and no way of going back to the slums. He becomes angry at everyone, and his only hope is that he has won admission to Holy Cross College. At Holy Cross, Clarence becomes involved with a Black Power group and becomes enamored of all the black Marxists of his day. At one point, they march on Harvard. To do so, they all get drunk. Coming back in the wee hours of the morning, Clarence passes the church, experience guilt and prays for the first time in years.

When he graduates, Clarence goes to the very prestigious Yale Law School. Again, he excels, but when he graduates nobody wants to hire him, because they figure that a white person going to Yale is brilliant, but a black person there is just a product of Affirmative Action. He does get one job offer from the Attorney General of Missouri, John Danforth, but Clarence hesitates to take it because he’s been a lifelong Democrat and Danforth is a Republican. However, it’s his one job offer.

When he goes there, the workload is tremendous, so Clarence decides to leave to go into business, and he goes to Monsanto. Then, he realizes he’s being trapped in a comfortable life, as he says “golden handcuffs.” He also has a wife and young son.

Later, Danforth hires Clarence to work with him in the Senate. Soon, he’s working for President Ronald Reagan, and the press is calling him an Uncle Tom. He realizes Reagan is doing more to alleviate racial inequality than the Democrats ever did. He becomes strongly opposed to social welfare and Affirmative Action, seeing them as a new form of slavery.

When he’s appointed a judge at a young age, he recognizes the Declaration of Independence is written from a biblical perspective with inalienable rights from God. The Declaration becomes his guide star and plumb line.

He excels as a judge. Since his wife has left him, he prays for a new wife and he says he receives a gift from God in Ginny.

Surprisingly, President George H. Bush appoints Clarence to the Supreme Court. Suddenly, the press and the Democrats are out not to just destroy him but to kill him. As he says, if you’re a black who keeps to the Democrat agenda, you can do no wrong, but if you’re a black who thinks for himself, you have to be destroyed by the leftist press and Democrat Party leaders.

The Senate hearings in the movie are fascinating. Senator Biden asks questions that he doesn’t even understand. He has no clue about Original Intent or Natural Law, but he uses it because they have to find out if Clarence Thomas is against abortion, which would make him totally unacceptable for not wanting to kill babies.

When it looks like Clarence has won the Senate vote, his former assistant in the Reagan Administration, Anita Hill, shows up to accuse him of some vile sexual “harassment.” If you don’t know what happened, you have to watch the movie, as Clarence realizes it is a high-tech lynching. He says growing up in the South, he was harassed, he was excluded, and he was rejected, but all the racist groups were never as vile, mean and cruel as the mainline press and the Democrats in the Senate.

CREATED EQUAL is a must-see movie. It keeps and holds your attention. The structure is filled with jeopardy, even though it’s a documentary, and the music is superb. There is a caution for Anita Hill’s obscene Senate testimony, which Clarence has to repeat when he refutes it. However, older teenagers, young Americans and all others should watch CREATED EQUAL.

Watch CREATED EQUAL: CLARENCE THOMAS IN HIS OWN WORDS: